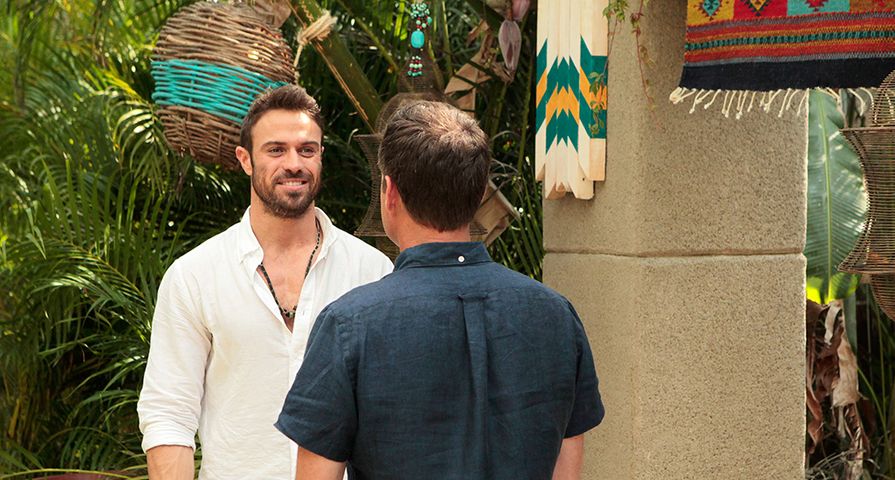 Well, that certainly didn’t take long! If fans of the latest season of The Bachelorette were betting on how long “villain” Chad Johnson was going to last on season three of Bachelor in Paradise, lets hope they only picked one episode!

On Tuesday, August 2, the season premiered and, as always, the two-hour premiere was filled with alcohol, awkward encounters, tears, and really bad first impressions. After Chad Johnson’s behavior on JoJo Fletcher’s season of The Bachelorette, fans were intrigued to see if he would change his tune to actually find love on Bachelor in Paradise, but that wasn’t the case at all.

As to be expected, the buildup to Chad’s arrival was complete with ominous music, and the other contestants were already talking about him! “Chad could be interesting. I think I’m going to like him,” a few said. It didn’t take long, however, for things to go downhill, especially when Chad ended up insulting/flirting with and then making out with notorious female villain Lace.

Unfortunately, as Chad got more and more drunk, his aggression got worse and at one point he threatened to throw Lace under a bus and “duct-tie” her up. Not long after Chad called Lace a “b–ch,” causing her to finally distance herself from him, Chad’s behavior got even worse as he stated, “I’ll murder everyone here. I’ll kill your children and murder your family. Dolla, dolla bills, yo.” Sarah was the only one to call him out on his horrible behavior and he responded to her with, “F–k that one-armed b–ch. You suck that d–k. Keeping sucking that d–l. Keep sucking that fame.”

The next morning after Chad had passed out and sobered up, he was called to a meeting with Chris Harrison and, after refusing to apologize or even take responsibility for is actions, Chris kicked him out. “You told everybody at this hotel last night to suck a d—. You had a chance to turn over a new leaf and you didn’t, and so on behalf of everybody, I’m sorry, I thought this could work out, it didn’t. I’m going to have to ask you to leave.”