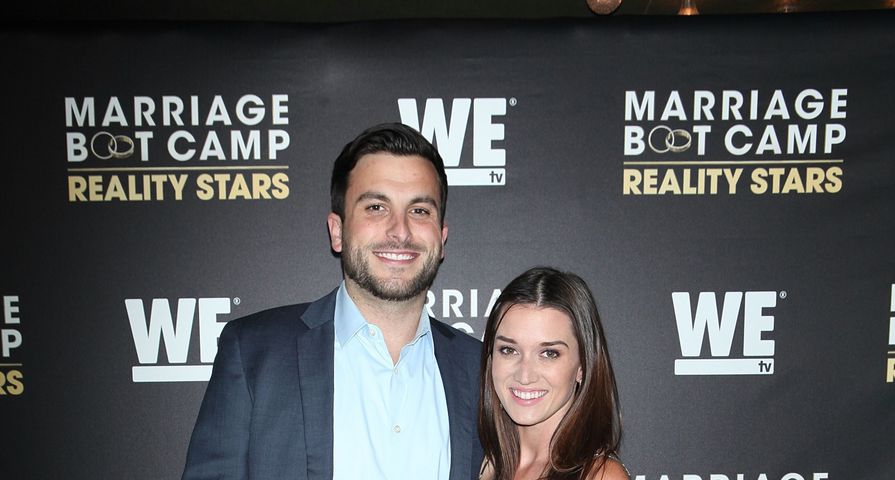 Jade Roper and Tanner Tolbert met during season 2 of Bachelor in Paradise. They had both previously tried to find love on The Bachelor and Bachelorette. Roper was on season 19 of The Bachelor competing for Chris Soules final rose, and Tolbert was on Kaitlyn Bristowe’s season of The Bachelorette. They were both voted off their respective seasons and they met on season two of BIP. They are one of very few couples to have survived the series and actually follow through on their engagement. Today they are expecting their first child together, a baby girl, and are happily married! Here’s a look at 9 things you probably didn’t know about Jade Roper and Tanner Tolbert’s relationship:

9. They Both had Crushes on Each Other

Jade and Tanner hit it off almost immediately on Bachelor in Paradise, and that’s because they both had their eyes set on each other from the get-go. “Jade started this crazy journey first. I was watching her on TV — I had a little TV crush on her,” said Tanner in an interview with People. Jade then chimed in and revealed she also had her eyes set on him the moment he walked onto BIP! “I saw him come down and I immediately felt something. I was like ‘I’m in trouble!'” she joked. In a separate interview Jade said she made a point to try and get Tanner’s attention early on in the season. She “kept trying to strategically place myself closer to him so he would turn around and talk to me, and it worked!”

In an interview with E! News at a Bachelor charity viewing party, Jade gave some insider details about her relationship with fellow Bachelor alum, Tanner Tolbert. “He’s funny on the show but he’s funnier and he is weirder [away from the cameras]. And he kept telling me that because he was so sweet in Paradise. He was like, there’s this weird side you’re going to find out about. I’m like, I don’t see it. And he’s…he’s a weird man,” she joked. “And I love him! He brings out my funny side, which I don’t feel like everyone does.”

Jade Roper and Tanner Tolbert met on Bachelor in Paradise back in 2015 and got engaged in the season finale, but as with every relationship in the Bachelor franchise, they had to keep their relationship hidden for months until the episode aired! They’d only dated for three weeks before they got engaged, but their bond has always been strong. After filming wrapped, they managed to go no longer than 10 days apart even though they were forced to keep a low profile and both lived in separate states. Jade had just recently moved to Nashville, but she visited Tanner in Kansas City at least four times. She usually drove, but sometimes flew. When flying she had to be extra careful — one time she even wore a wig!

6. Family Reaction to Their Engagement

Both Jade and Tanner’s family were surprised when they found out they were coming back engaged. Tanner was able to contact Jade’s father prior to proposing in order to ask permission. “I think they were super surprised. After filming, Tanner asked my dad for his blessing. My parents have been waiting awhile for me to find that right person. I loved that they were able to experience our love story and watching it happen,” said Jade.

5. Spent The Night Before Their Wedding Together

There’s a lot about Jade and Tanner’s relationship that isn’t exactly traditional, especially when it comes to how they met and how long they dated before they got engaged! They continued to break tradition up until the night before their wedding when, instead of spending it apart, they spent it together! “Tanner and I did not do the traditional thing, we actually stayed together last night!” said Jade to E! News.

4. How They Found out They Were Pregnant

A few months prior to revealing they were expecting, the cute couple hinted they were ready to start a family. Jade had said to E! News: “We’re thinking about it! I wouldn’t be surprised if we had a baby in the next year or two. We’re building a big house so we have lots of spare rooms that need children. Yeah I would love to, I’m ready for that.” In a separate interview with People, Jade revealed how they found out! “Two days after my missed period I took the test. I just knew it. Tanner wanted to be there. He was like, ‘Don’t take it without me.’ One morning we woke up and I took the test and we watched it on the counter and it turned from not pregnant to pregnant. I knew it, but it was like like ‘Holy cow, it’s happening!”

3. How Many Babies They Want

Ahead of becoming pregnant with their first child, Jade and Tanner both opened up to Us Weekly about how many kids they want. Tanner joked and said, “I joke around and say two and a half. So if they’re both girls, I want to try for No. 3 for a little boy.” Jade agreed and said she was like Tanner and hoped they have a boy first to take some of the pressure off of her to have another right away. Now we know the two are welcoming a girl sometime soon so sounds like baby No. 2 won’t be far behind!

2. Why They Did Marriage Boot Camp

Surprisingly, Tanner and Jade signed up to go on Marriage Boot Camp shortly after they tied the knot. According to them, they had “small problems” they wanted to work out before they became bigger issues in the relationship. “We never got to do premarital counseling, because everything moved so quick with us. So we kind of viewed it as an opportunity to lay a good foundation,” said Tanner. Jade weighed in and said: “All of our relationship has already been on television, so why can’t we be good role models by showing [the full picture]? Like hey, we do love each other and we do have issues and we’re here to work them out, just like everyone else!”

1. What Jade Loves About Tanner

Jade’s favorite thing about her beau is that he’s funny and secretly really romantic. “I’m going to give you two. His humor. He’s hilarious. We’re able to just be goofy and funny with each other. He’s also super romantic. I wish the show had shown more of those tender moments. He’s super sympathetic and sensitive in a way that I don’t think I’ve experienced,” she said.