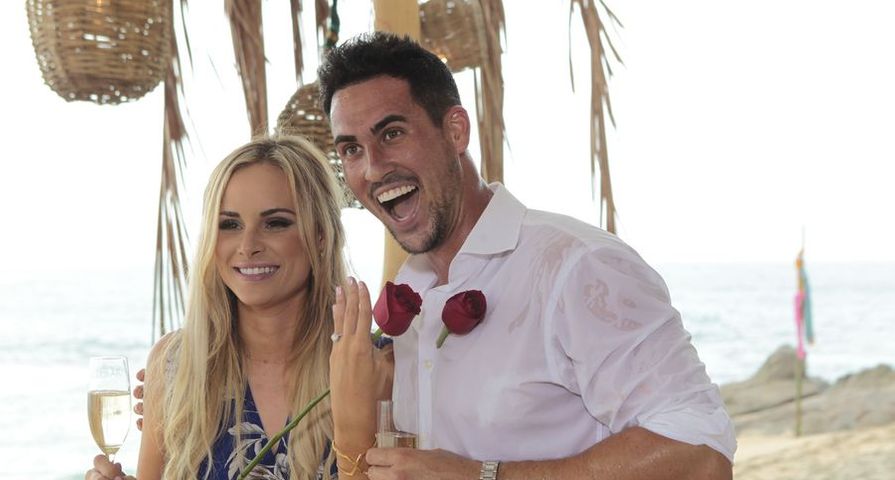 When former Bachelor and Bachelorette contestants head into Paradise, most of them are looking for love. We’ve had a few couples – Tanner and Jade, and Carly and Evan – totally win over our hearts; however, there have been several other couples who did the opposite and instead turned us off. Bachelor in Paradise has had its fair share of annoying couples and here are the 8 most annoying:

Even though Daniel’s romance with the twins, Emily and Haley, wasn’t real, it still was annoying. These three would just use each other to get a rose. One of the most annoying interactions between them occurred when Haley faked romantic interest in Daniel to get him to give his rose to her instead of Sarah. Talk about doing anything to stay in the game! Daniel was also just as cunning. He tried to get the twins to give him their rose at the next ceremony, but thankfully they realized that there was no chance of them finding love in Paradise and decided to just go home.

These two were an item for a hot minute during the season three premiere. Thankfully it ended quickly because these two were a hot, annoying mess together. It didn’t take long for them to get rip-roaring drunk and then oscillate between making out and throwing insults at each other. Thankfully their relationship didn’t last pass the premiere, otherwise it would have become epically annoying.

It literally took two episodes for Dylan Petitt and Elise Mosca to become the most annoying couple of season one of Bachelor in Paradise. Both of them were really immature. Dylan insisted that he and Elise date other people (which she didn’t want) and then when she made out with Chris Bukowski, he used the opportunity to dump her. Then during the rose ceremony, he rejected her rose, which lead to her giving one of the most cringe-worthy speeches in BIP’s history to the entire cast about love. Their relationship was really annoying, but thankfully it was short-lived.

Caila and Jared were kind of cute together initially; however, once Ashley stormed Paradise and proceeded to do her best to get in between them, things got really annoying. Caila wasn’t having any of Ashley’s crap, but Jared seemed to have grave difficulty standing up to his former flame and her scheming ways. As a result, his relationship with Caila suffered and they quickly went from cute to annoying. Lucky for us, they left Paradise together and took their fledgling romance into the real world and, unsurprisingly, it didn’t last.

During season one of BIP, Graham Bunn knew that AshLee Frazier was talking smack about Claire Crawley; after all, his good friend Michelle Money told him about. He was also well aware that AshLee was incredibly possessive, yet he still continued to date her until the finale of the show. Graham’s lack of a backbone throughout the season was incredibly annoying and so was AshLee’s two-faced nature. She was literally one woman in front of the cameras and then a total wench when she thought they were gone. At least she finally got what she deserved in the finale when Graham broke up with her before the fantasy suite dates, but seriously, he should have done it a lot sooner.

Amanda and Josh looked good together; however, watching them suck face for the majority of season three was nauseating to say the least. It didn’t help that Amanda was completely oblivious to Josh’s obvious rage issues and ignored everyone’s warnings. Even worse, when Josh wasn’t sucking Amanda’s face off, he was making love to a piece of pizza. The sounds of groaning are forever etched in our memories.

These two were annoying for so many different reasons. First off, Ashley was obsessed with Jared in a really cringe-worthy kind of way and he was so spineless that he ended up leading her on for most of season two. Even when he would break up with her, he would end up leading her on AGAIN, only to get her hopes up and then break her heart. In season three, when she returned to Paradise to try and break Jared and Caila up, he once again couldn’t muster the strength to just tell her to go away. He literally had to run away from Paradise with Caila. Thankfully Ashley and Jared won’t be returning to Paradise again cause we honestly couldn’t stand to witness this story of unrequited love for the third time.