Carrie Underwood Reveals She Is Expecting Another Son At CMAs 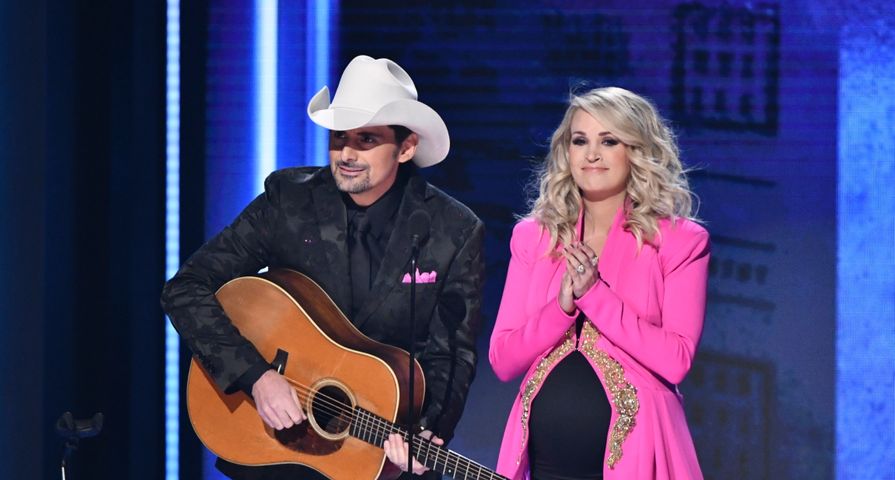 It is another son for country star Carrie Underwood and hockey player Mike Fisher!

Underwood announced that she and her husband are expecting another boy during the opening of the 2018 CMA Awards on Wednesday, November 14. Underwood joked with co-host Brad Paisley before opening up about her second child.

“Brad, have you been working out?” she asked, gesturing to his biceps. Paisley, 46, proudly announced he had, before jokingly gesturing to Underwood’s growing baby bump. “And you have really let yourself go.”

After clarifying that she is, in fact, expecting, Paisley started reminiscing about an incident that occurred when they hosted together years earlier. “Hey, remember last time when I accidentally revealed the gender of your baby?”

Underwood, expectedly, did. “I mean, who could ever forget #BradBlewIt?” she asked.

Paisley then tried to get Underwood to “give him a hint,”  “Seriously Carrie, give me a little baby hint? Johnny or June? Keith or Nicole. Garth or Trisha. Tim or Faith. George or Tammy. Waylon or Willie?”

Of course, the last two didn’t make sense, but it was enough for Underwood to finally spill. “Oh my gosh — Willie, it’s a Willie ok!?”

As Underwood was met with a big round of applause in congratulations, Paisley continued, “Having two kids, — and two boys — myself, actually I know a new arrival can be tough on the new kid. So, as a little surprise, I’ve asked Carrie’s firstborn son to come out for a very special moment in the CMAs spotlight.”

Of course, it was just a Paisley joke as it wasn’t Underwood and Fisher’s son Isaiah who took the stage, but instead viral superstar Mason “Yodel Kid” Ramsey.