Country Music Awards’ Most Shocking Looks Of All Time 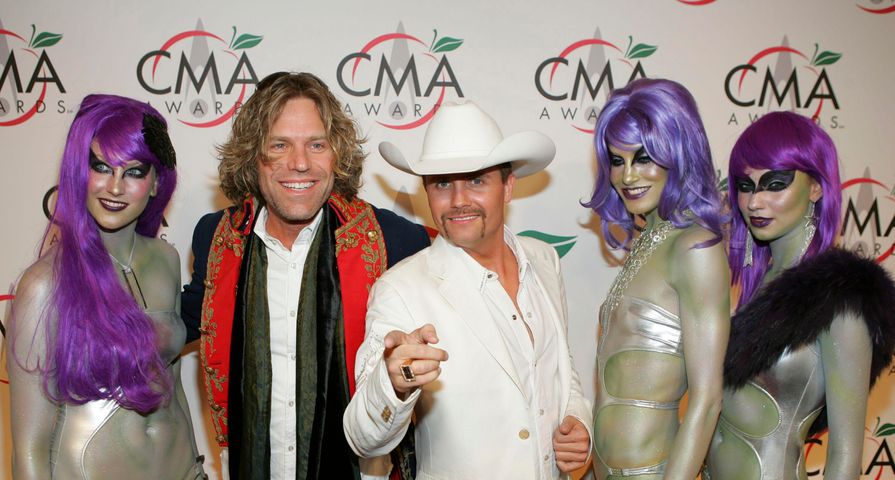 There is simply no doubting that some of the most outrageous fashion creations have arisen when country music stars hit the red carpet at the annual Country Music Awards show! These twangy musicians aren’t afraid to step outside the box with their looks and have been seen wearing everything from chunky rhinestones to embroidered blazers and even light-up costumes! Follow along for 10 country stars who shocked us when they stepped out on the red carpet donning some of the craziest garments we’ve ever seen:

Clearly, Tricky Pony did not discuss wardrobe before appearing at the 2004 Country Music Awards! While two of the bandmates looked elegant and black-tie appropriate, one bandmate clearly didn’t get the memo! He instead opted for a pair of head scratch-worthy embroidered jeans that featured flames and various motorcycle labels along with an embroidered cobalt blue jacket that featured similar embroidery of skulls and death imagery. Rather than dress shoes, he rocked a pair of classic sneakers and topped the look off with an exaggerated cross chain, interesting top hat, and tacky belt buckle.

Miranda Lambert typically keeps it quite classy on the red carpet with flowing gowns, flattering shapes, and minimal embellishment; however, it clearly hasn’t always been like that based on this photo from the 2005 CMA’s. Lambert wore a silk and chiffon number that featured a bedazzled waistline, but the true fashion mistake was the huge chandelier-inspired necklace she wore that featured various diamonds and pearls. The entire look clashed and was definitely one of this country star’s worst red carpet looks yet!

Rascal Flatts has never been fashion leaders by any means, but this particular look was definitely one of their worst! A long patent trench coat has no place on the red carpet, especially when paired with coordinating red dress shoes and awkward sunglasses. The velvet and white blazers that the two other band mates wore are admittedly not as awful, but they still add to the overall unpleasantness of this tacky group ensemble.

Jaws definitely dropped when Troy Gentry and Eddie Montgomery of the Montgomery Gentry band hit the red carpet at the 2005 CMA’s. Troy opted for an embellished black blazer with satin details and a matching bell-bottom pant that had a similar embroidered detail wrapping around the shin. Eddie had his own interesting take on fashion with an embroidered “Broadway” jacket that featured everything from music notes to stars and even roses sketched on. The colorful piece reached well past his knees, which drew attention to the matching red cowboy boots.

As strange as Big Kenny Alphin and John Rich’s outfits are, they seriously don’t even compare to the purple-haired alien women surrounding them on the CMA red carpet. These ladies painted their skin in metallic silver while rocking one-piece bikinis, purple hair, and heavy eye makeup. In the center are Big Kenny Alphin and John Rich wearing interesting outfits of their own complete with Rich wearing a bedazzled scarf and Kenny in a matching white blazer and cowboy hat set.

Loretta Lynn proved that the CMA’s gives way to an end of the formality fashion spectrum and to expect anything from jeans to ballgowns! Lynn took formal to a new extreme with the yellow, tulle gown she wore in 2010. The dress featured glittery layers in the skirt and chunky bedazzling on the chest and arms. The dress was poofy, unflattering and much better suited for a princess Halloween costume than the red carpet!

Laura Bell Bundy took tacky to the next level when she stepped out at the 2011 CMA’s wearing a bedazzled bodysuit with a purple layer of draping hanging around her waist. The look bared the entirety of her legs and also featured a super low neckline which made this look much more theatrical than a respectable red carpet look. We wish Bundy had amped up her classy side a little more and would have much preferred to see her in a thigh-high slit than to have her baring both of her legs in a revealing bodysuit.

Ariana Grande and Little Big Town took the CMA stage together back in 2014 in an interesting light-up outfit combo. Grande rocked a short, flouncy outfit that quite literally shined bright pink while Little Big Town coordinated with their own light-up black and white costumes. Although we can understand a dramatic look like this for on-stage appearance, we certainly hope these country stars had alternative outfits for hitting the glamorous red carpet!

Dolly Parton is certainly not shy to rock an over the top ensemble to a celebrity event and this interesting look does exactly that! The star wore super dramatic flared jeans that featured knee-high slits and embroidery trailing up the side of her leg. On top, she wore a gold jacket made of a material that looks much better suited for ’90s living room curtains than a fashion piece! Although this look is definitely not one of her best, we love that she stayed true to her classic teased and voluminous hairstyle.

It would be impossible to have a CMA fashion list without including the queen of country Shania Twain! Although it seems this gorgeous star could do no wrong, we can’t help but wonder what she was thinking when she planned to wear this full-pink ensemble while performing at the 1999 CMA awards. The look featured pink daisy dukes, a cropped tube top, a long collared duster coat, and matching gloves! To add a country spin, the star wore a bright pink cowboy hat and boots.