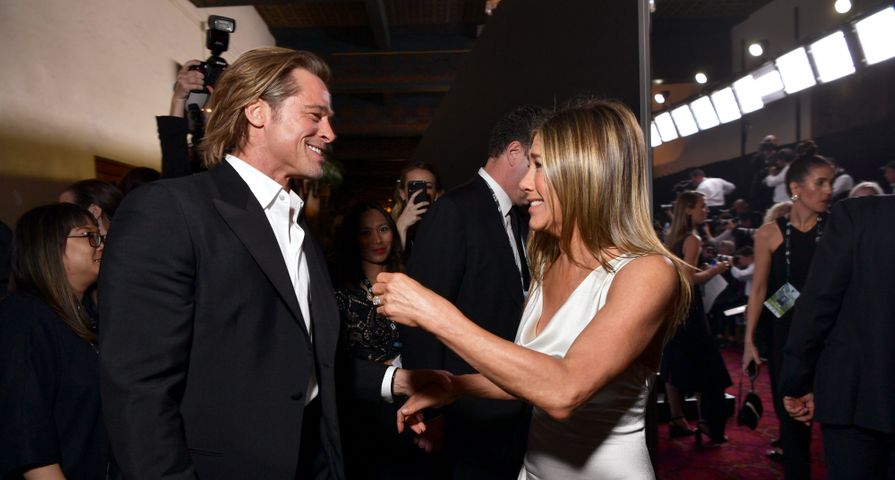 After their respective wins for Once Upon a Time… In Hollywood and The Morning Show, the former couple was snapped backstage, smiling while chatting. The photos taken show the 56-year-old actor grabbing Aniston’s hand while both were sharing a laugh.

Earlier at the 2020 SAG Awards, Pitt cracked a joke during his acceptance speech for outstanding performance by a male actor in a support role in Once Upon a Time… In Hollywood about how his character was a person who “doesn’t get on with his wife.”

“Let’s be honest, it was a difficult part,” Pitt said. “The guy who gets high, takes his shirt off, and doesn’t get on with his wife. It’s a big stretch. Big.”

After he made the joke, the camera then panned over to his ex-wife Aniston, who was laughing and clapping.

Just after Pitt’s win, Aniston accepted the award for outstanding performance by a female actor in a drama series for The Morning Show. She is the co-producer for the AppleTV+ show alongside her costar Reese Witherspoon. Pitt was captured backstage stopping to watch Aniston’s acceptance speech on one of the screens.

Earlier in January, the Once Upon a Time… In Hollywood actor won a Golden Globe for best supporting actor in a motion picture and poked fun at his love life during his acceptance speech.

“I wanted to bring my mom but I couldn’t, because anyone I stand next to, they say I’m dating. And that would just be awkward,” Pitt joked at the time.

The camera again panned to Aniston, who was seen laughing in the crowd.

Aniston and Pitt were married from 2000 to 2005. Although the two have separated, they have remained friends.