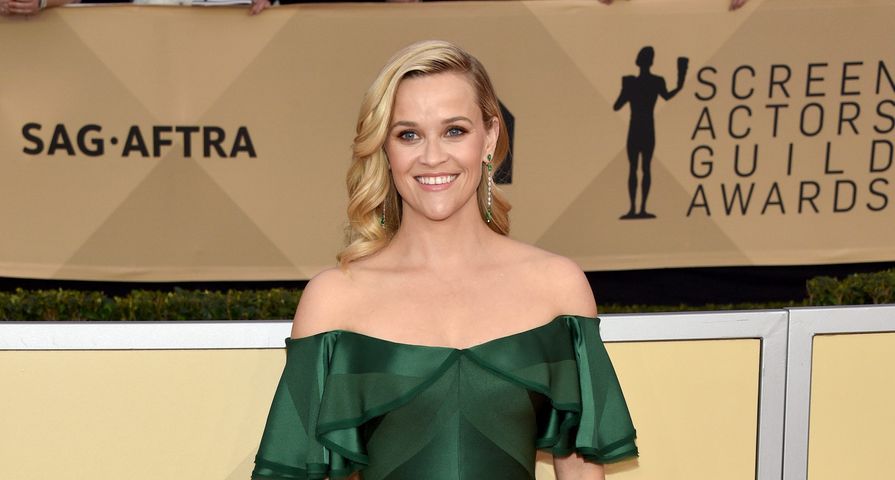 The 2018 Screen Actors Guild Awards red carpet was a sea of colors following the Golden Globes fashion blackout this year! Kristen Bell landed herself near the top of her list with the fuchsia pink voluminous number she wore, but she also earned even further praise for stealing the spot of the first ever female host for the awards show. Check out Bell’s jaw-dropping number, along with many other standout fashion moments, as we recall 12 of the best dressed stars from last night’s 2018 SAG awards:

Olivia Munn was all about the metallics last night as she stepped out in this black and silver embellished number. The gown was sleek and slim to her body and featured dramatic botanical detailing trailing along her hips. The contrast of the silver sparkle with black was both elegant yet completely eye-catching, which is what landed Munn as one of the best dressed women of the evening! 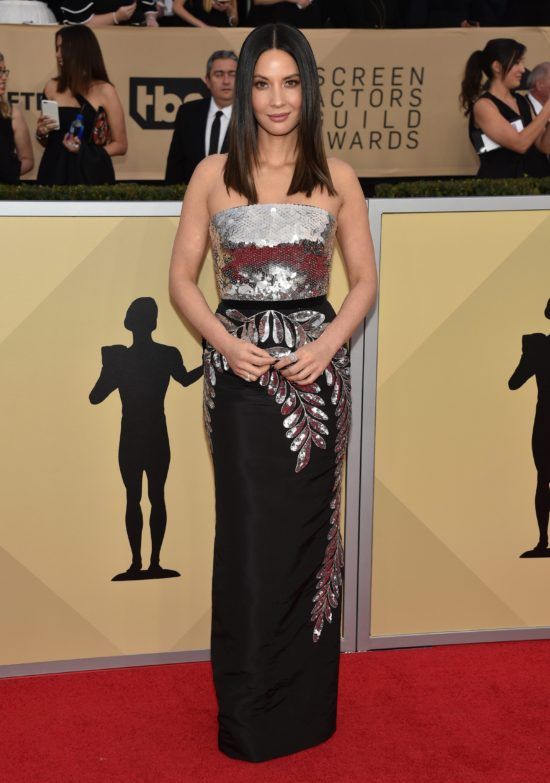 Yara Shahidi is fearless when it comes to her fashion, and this dramatic jumpsuit is the perfect example of this. Rather than opting for a typical flowing gown, Shahidi shook things up with this sleek pant alternative. The look boasted an exaggerated bow and cape detailing trailing behind her, which really worked well to bring the drama considering the jumpsuit itself was such a simple cut. 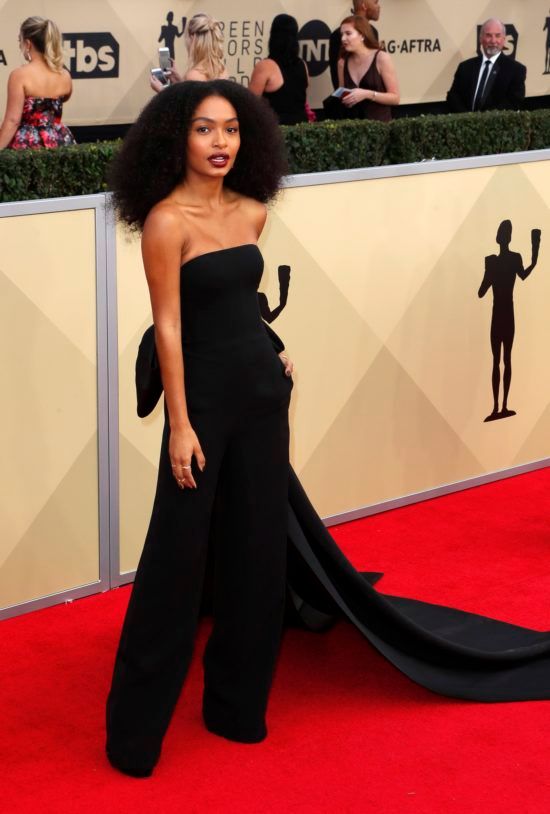 The SAG Awards: 9 Best Dressed Celebs Of Years Past

Dakota Fanning is a red carpet all-star when it comes to fashion, and this dainty, feminine look definitely proved that! The strapless gown featured subtle silver beading throughout and an emphasis on her waist and neckline. Fanning pulled her hair into a high, elegant bun which allowed the subtle shimmer of the gown to truly sparkle as she graced the red carpet. 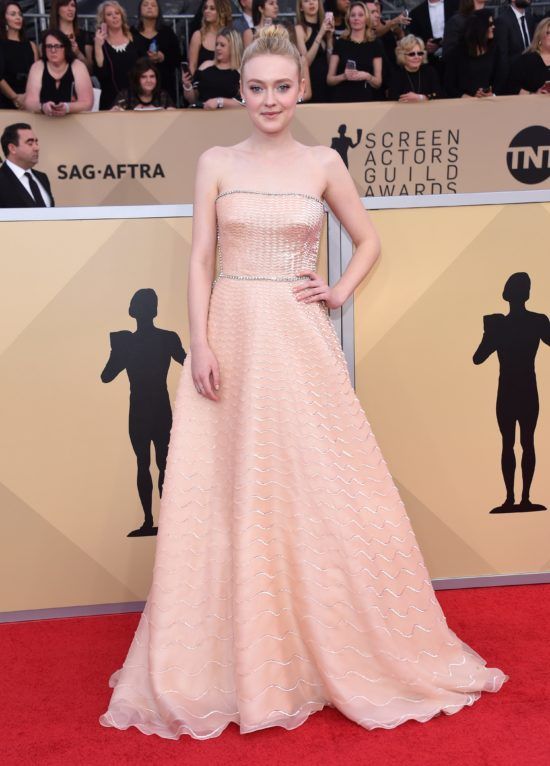 Lupita Nyong’o seriously brought the glam factor with her SAG Awards red carpet look this year! The metallic number hugged her curves in all the right places and flourished into a full feathered display around her ankles. We love the unexpected pop of texture and drama that the feathers bring, which undeniably landed Nyong’o as one of our top-dressed stars from the evening! 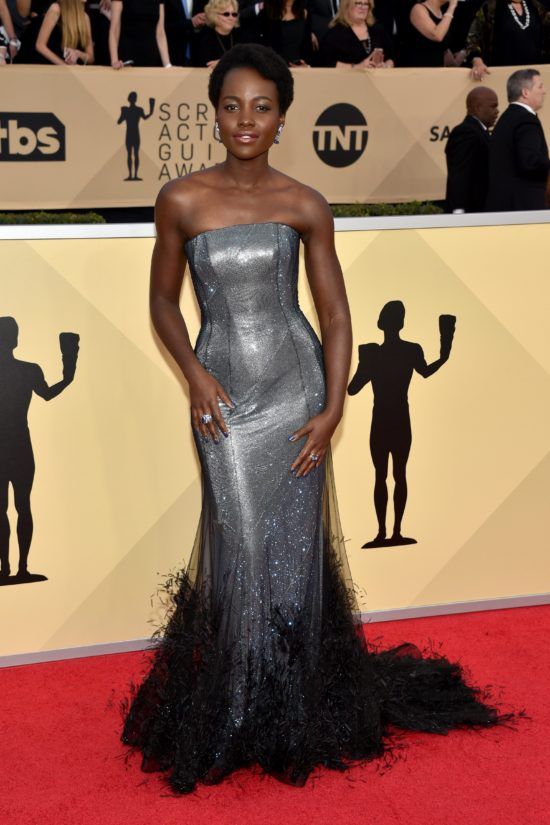 Tracee Ellis Ross absolutely dazzled on the SAG red carpet last night in this sophisticated white number! The Ralph & Russo design featured a sleek, curve-hugging shape but also brought the drama with the asymmetrical cape detailing and one-sided cap sleeve. This look goes to show that sometimes less is more when it comes to a winning red carpet moment. 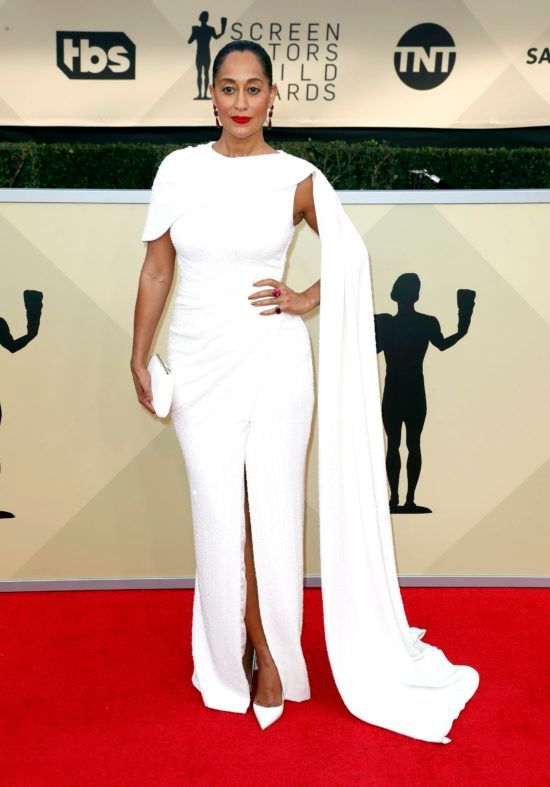 This Is Us actress Mandy Moore looked absolutely gorgeous last night in this dainty indigo gown! The look featured delicate straps and a simple V-neckline, but it was truly the subtle sparkle and eye-catching jewel tone that brought the glamour with this look! Moore complimented the look with a matching box clutch and a warm-toned smokey eye. 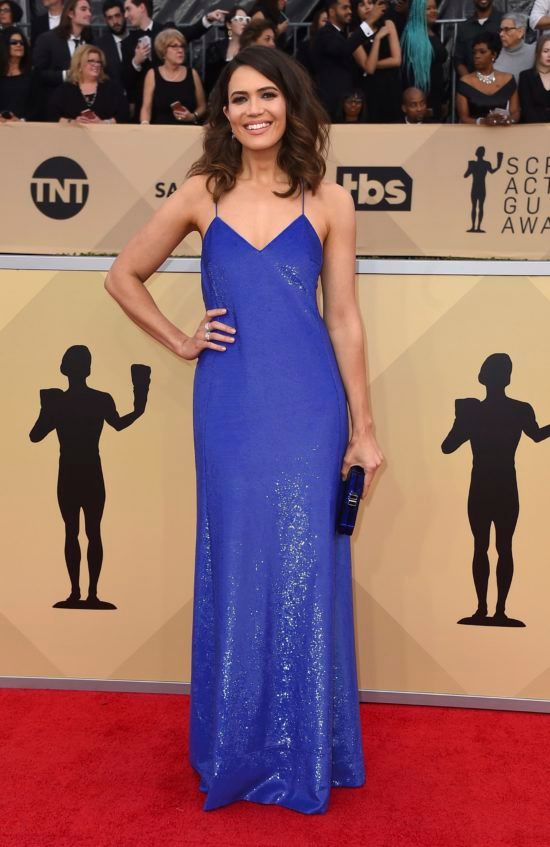 Margot Robbie is a cutting-edge fashionista in the world of Hollywood! She’s proved time and time again that she’s not afraid to take a risk or two and that she has a natural sense of style and class. This particular petal pink red carpet look is a prime example of this! The look featured a subtle silver sparkle and delicate halter neckline, but the true glam feature was the dramatic feather embellishment around the waist! Typically we’d question a look as bold and different as this, but Robbie has a way of making it come across elegant and strategic. 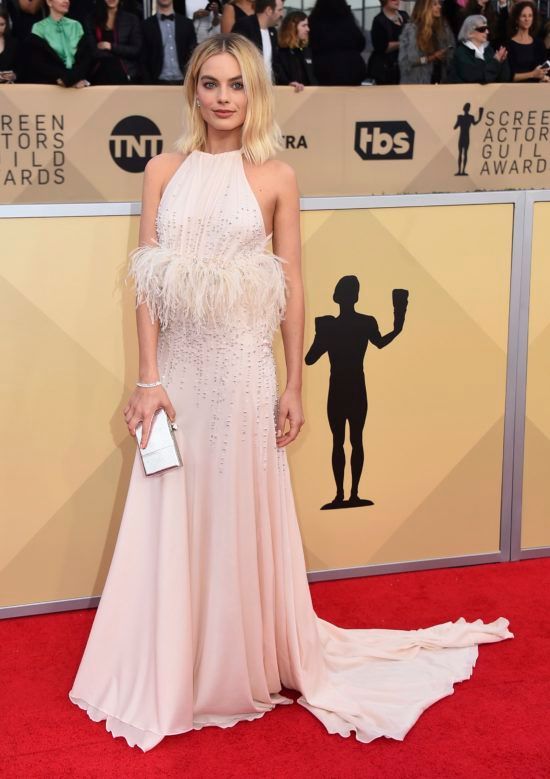 We are happy to announce that Nicole Kidman has broken her worst-dressed streak with her SAG Awards red carpet look this year! The muted, sparkly gown was the perfect choice for the blonde beauty. It featured a sleek, body-hugging design that was both sophisticated and classy but also featured a dramatic shoulder ruffle which delivered on the drama and glam factor. 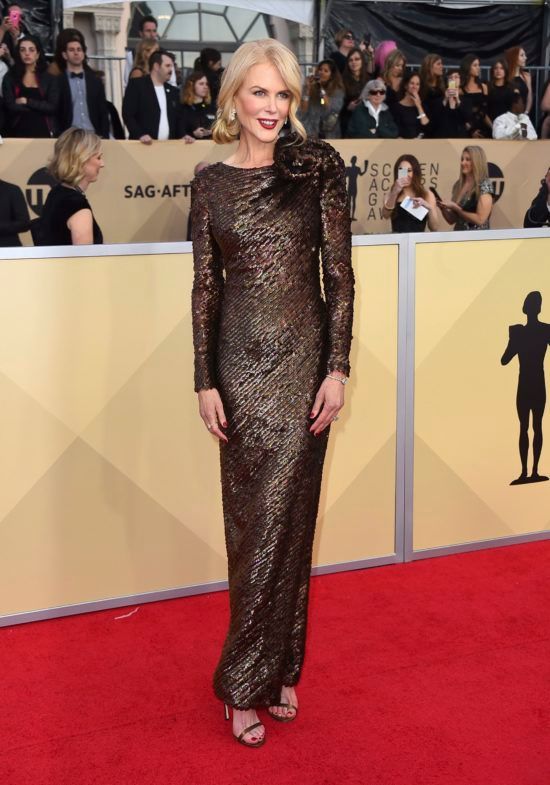 Madeline Brewer looked absolutely angelic last night on the SAG Awards red carpet! Her pale pink gown featured a subtle corset-style bustier that was the perfect balance of sexy and delicate. The gown cinched at her waist to highlight her tiny figure and flourished into a full, voluminous skirt. Our favorite aspect of this dress, however, is the exaggerated pearl beading throughout! This detail was totally unique but still totally sophisticated and the epitome of elegance. 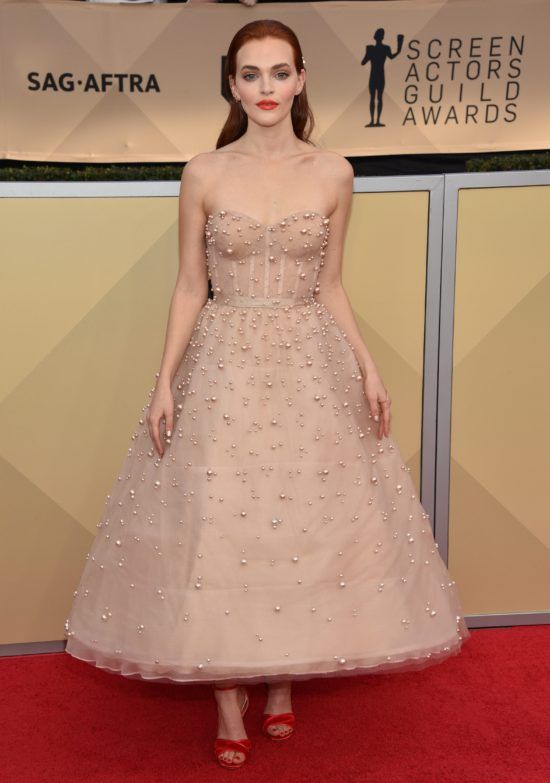 Reese Witherspoon looked absolutely dazzling on the SAG Awards red carpet where she donned a sharp, emerald number. The cut of this gown was the perfect choice for her petite frame, and the flattering angled stripes trailing down the dress made her look even sleeker. The ruffled off the shoulder neckline perfectly balanced the sophisticated cut by adding a touch of romance and softness. 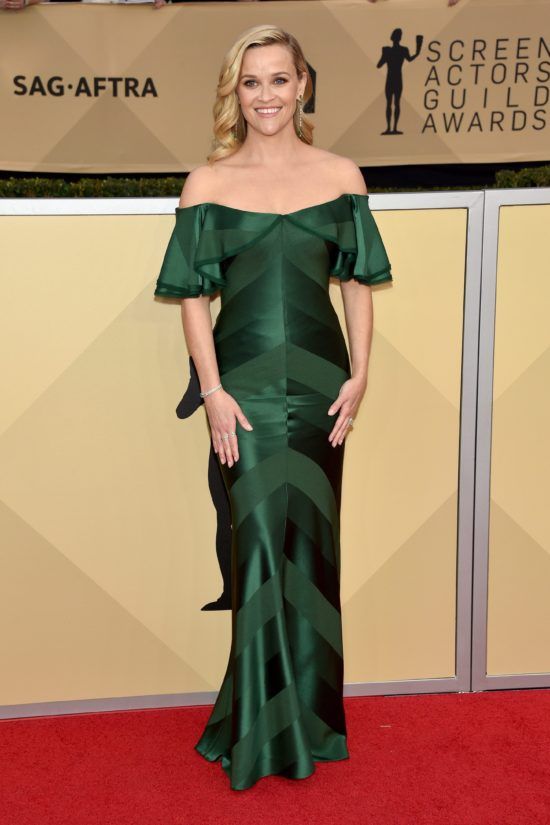 Halle Berry absolutely glowed last night on the SAG Awards red carpet when she stepped out in this dramatic, beaded number! The daring number featured a plunging neckline that was covered in warm-toned beading and a black, sheer skirt overlay which kept the look sophisticated and classy. This unique color palette really highlighted Berry’s bronzed complexion in the best way possible! 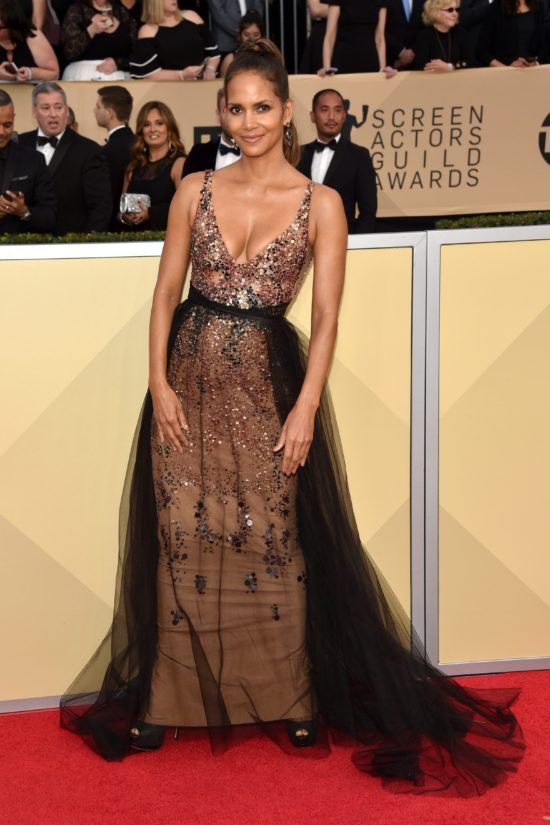 Kristen Bell stole the show last night in this fuchsia pink embroidered number! The princess gown was seriously swoon-worthy and feminine, but also quite unique by pairing together a color palette we wouldn’t initially think of — red, purple and pink! Bell proved that sometimes taking risks with the unconventional can seriously pay off, and this romantic number definitely left an impression last night! 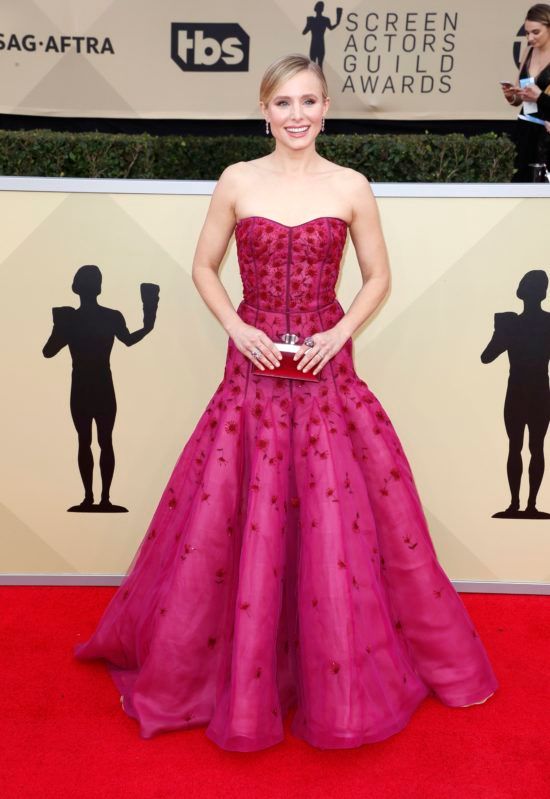