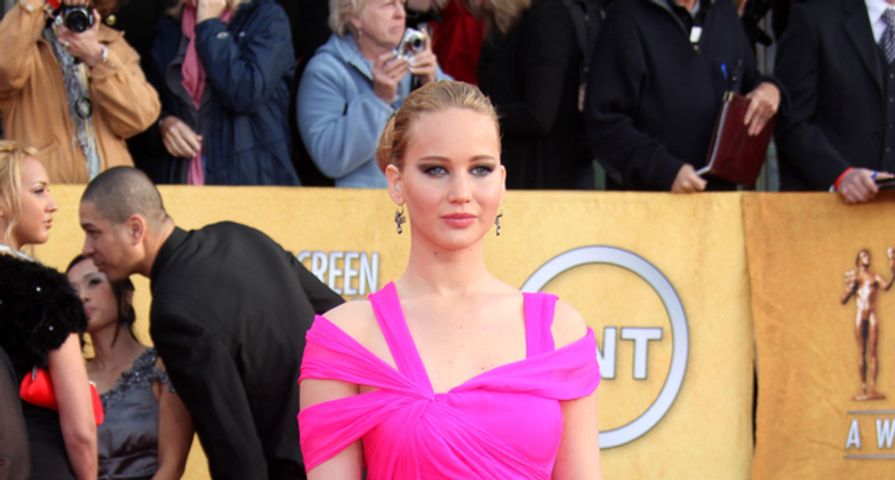 Anne Hathaway has had a lot of good luck on the red carpet. There have been some pretty epic misses like that pink Prada dress that she wore to accept her Best Supporting Actress Oscar but, for the most part, she seems to get fashion. We think this probably had a lot to do with her celebrity stylist Rachel Zoe. She has dressed Hathaway for success many times; however, for the 2013 Screen Actors Guild Awards, we think she missed the mark.

The Academy Award-winning actress donned this gothic-inspired Giambattisa Valli Spring 2013 Couture gown with Kwiat jewels, Jimmy Choo ‘Kalpa’ sandals and a black Edie Parker clutch. Although she ended up winning the Best Supporting Actress Award for “Les Miserables,” people were pretty divided about this dress. They either loved it or hated it. Considering that this was her year – she took home many of the big awards that season – one would think she would have chosen her red carpet ensemble a little more carefully.

We can’t help but love Julianne Moore. There is something so warm and inviting about her and she’s just such a superb actress. She hasn’t taken home an Academy Award yet, but this could be her year. Last year, she won a Screen Actors Guild Award for her performance in the television film “Game Change,” which was about Sarah Palin’s 2008 campaign to become Vice President. Moore portrayed Palin.

While she was winning at the SAG Awards, Moore lost on the red carpet. She wore this black and white Chanel Couture Fall 2011 gown, which featured a plunging neckline and floral appliques on the skirt. The only major problem that we have with this dress is the top. It doesn’t look as though it was fitted properly. The sides are baggy and the plunging neckline plunges a little too low. Let’s hope that this year she dresses for success in a winning ensemble.

Kerry Washington is usually one of the best dressed celebrities on the red carpet. She really likes to take risks and most of the time they really pay off. At the 2014 Screen Actors Guild Awards, this wasn’t the case. She rocked this custom made Prada ensemble that consisted of a fuchsia crop top with embroidered crystals and a high-waisted, navy blue silk skirt. She accessorized with Christian Louboutin ‘Pigalace’ pumps and fuchsia clutch.

We personally think this outfit was a bad idea. It’s pretty obvious that she and her stylist wanted to try something different. Much of the time celebrities who are pregnant either try to hide their bumps in something billowy or show it off in really tight dresses. Many pregnant women would never even entertain the thought of wearing a crop top. We’ll give the “Scandal” star kudos for being brave enough to try something different, but we hope she won’t try this with another pregnancy.

January Jones does not have a stylist so, when she’s on the red carpet, she either hits it out of the park or misses it altogether. At the 2013 Screen Actors Guild Awards, she did the latter. She wore this sleeveless, black and white tuxedo-style Prabal Gurung gown. She polished off the look with pompadour-style hair. This is definitely not Jones’ best look – not by a long shot. The dress looks awkward, like it wasn’t fitted properly, and it is also pretty severe-looking.

We do have to give the “Mad Men” actress some credit though. She cherry-picks her own outfits for awards season so when she gets it right it is mostly her doing. According to her, she likes to follow what Diane Kruger wears on the red carpet, so that might be one reason why she has had a number of winning looks on the red carpet in the past.

Lea Michelle was definitely one of the worst dressed at the 2013 SAG Awards. She wore this pink strapless Valentino Resort 2013 gown with Jennifer Mayer jewels and Jimmy Choo heels. We don’t really care about the actual style of the dress; however, we are vehemently against the color. It is so bright that it is almost blinding. Michele is a grown woman – why does she want to dress in princess pink at an awards show? This dress would look so much better in almost any other color, yet here we are seeing it in bright pink. What a disappointment.

Michele and her co-stars from Glee were all up for a SAG award for Outstanding Performance by an ensemble in a comedy series. They didn’t take the award home. We blame her dress. It must be some sort of bad luck charm. Either that or a more deserving show won. We’re not sure.

Kaley Cuoco is a dud when it comes to fashion. She really doesn’t get it and we don’t think that her stylist, Tara Swennen, does either. Their reportedly friends, which would help explain why they are still working together. We argue that it is way harder to fire a friend who is doing a bad job. If these two weren’t friends, we think Cuoco would have probably ditched her a while ago.

The “Big Bang Theory” star looked anything but good at the 2013 Screen Actors Guild Awards. She wore this red lace Romona Keveza Spring 2013 gown, which featured a sculptured bodice, with red satin pumps and a matching Judith Leiber clutch. The length on this dress is all off and it is up to Swennen to notice these things. Cuoco’s helmet hair wasn’t helping her situation either. Whoever told her that bangs were a good idea should be fired too.

Freida Pinto is another actress who should stay away from bright pink. At the 2013 SAG Awards, she wore this Roland Mouret gown, which featured a chic cowl neckline and waist-cinching black belt. We really don’t care for the style of the dress. It does not flatter her figure at all. It looks baggy on top, which adds imaginary weight. Also, the color, fluorescent pink, is painful on the eyes. To determine just how bad this dress is we would need to see it in a different color. Pink just makes everything look worse.

Pinto is a really attractive woman. She has a face and body that were made for fashion, which is why we expect so much more from her. She reportedly works with celebrity stylist George Kotsiopoulos on her red carpet ensembles. We’re just going to assume that he had an off day when he dressed her for the Screen Actors Guild Awards. That’s the only thing that could explain it.

Before Jennifer Lawrence started working with celebrity stylist Rachel Zoe, she was one of Elizabeth Stewart’s clients. It was before her press tour for “Silver Linings Playbook” that the Oscar-winning actress decided to freshen up her look, so she switched Stewart for Zoe, which wasn’t a bad choice since her style has improved considerably as a result.

At the 2011 Screen Actors Guild Awards, she was obviously not working with Zoe. She wore this Peptol-Bismol pink Oscar de la Renta Pre-Fall 2011 gown, which featured a draped bodice. She accessorized with a black velvet belt, black heels and a black clutch. She was up for an award that night for Best Actress for her performance in “Winter’s Bone.” One of the worst things about this dress is definitely the color. It is so bright that it is almost blinding. We’re so glad she switched up her stylist. This dress should have cost Stewart her job.