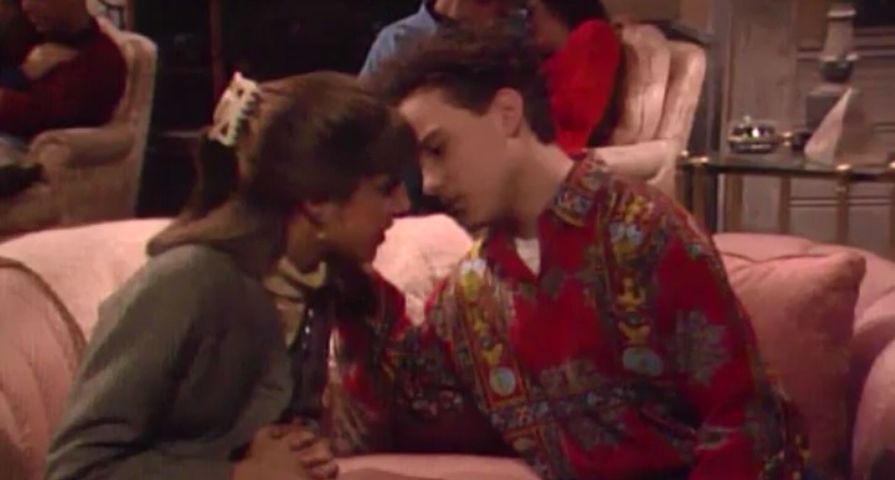 The Big Bang Theory: Behind The Scenes Secrets
Source: NBC

The stars of The Big Bang Theory have become quite the unit over the past nine seasons with the major success of the show, and as fans love to remember some of the star’s connections go way back.

Many remember that Johnny Galecki (Leonard Hofstadter) played the longtime boyfriend to Sara Gilbert (Leslie Winkle) when they starred on Roseanne together in the ’90s, but on Conan on Wednesday Feb. 2 it was Johnny Galecki and Mayim Bialik (Amy Farrah Fowler) that revisited their old on-screen romance.

Back in the ’90s in the two appeared on Blossom together when Galecki guest starred in an episode. Conan asked them about the moment so many years ago and Bialik stated, “We were both 14. We kissed.” Galecki added, “It was our first stage kiss for both,” and Bialik responded, “It might have been my first real life kiss also.” Immediately their Big Bang co-star Kunal Nayyar yelled, “Do it again!”

Luckily Conan was ready with a picture right before their kiss on Blossom, and the rest continued to tease the two about the adorable moment. Conan then asked if there was a connection there or if they became friends after sharing their first on-screen kiss and Galecki joked, “we tried for a second,” before they cut to the two full on making it right then and there on Conan.

Check out the hilarious moment below!