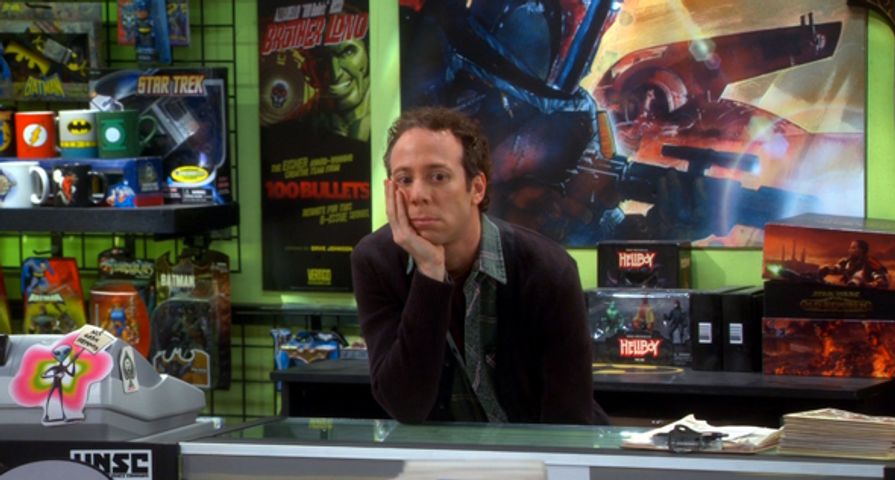 The Big Bang Theory relied on the comedy of Leonard, Sheldon, Howard, Penny and Raj for years before giving new life to the show with the addition of a few new main characters, namely Amy, Bernadette and Stuart. Stuart Bloom first appeared in Season 2 as the mundane and dry witted comic book store owner, and as the year’s have progressed, his role has gotten much bigger. As it turns out, Stuart is now one of the funniest parts of The Big Bang. His depressed personality is much different and darker than the show is used to, but thanks to Kevin Sussman’s acting and perfect execution of the script and character, it works! Check out Stuart’s 10 funniest quotes!

Penny: “You’re really going to lie on the floor and pretend to be dead all night?”
Stuart: “What do you think I was going to do at home?”

Stuart: “Do you guys know any musicians?”
Howard: “Why?”
Stuart: “I was thinking it might be cool to have live music here a few nights a week. You know, give this place more of a ‘staying in business’ vibe.
Howard: “What kind of music are you thinking of?”
Stuart: “I like all kinds of music, but my favorite genre is free.”
Raj: (Talking about “filk” music). “It’s been around for years. It’s like folk music, but with a sci/fi fantasy theme.”
Stuart: “I like it. Sounds exactly like something I shouldn’t be expected to pay for.”

Howard: “Hang on, I know a place where you could stay and earn some money at the same time.”
Stuart: “Great!”
Howard: “I just have to warn you: it will involve humiliation, degradation and verbal abuse.”
Stuart: “So, what’s the catch?”

Stuart: “I gotta tell ya. This is the most holiday fun I’ve had since my therapist changed my anxiety medication and I stopped caring about the blood in my stool.”
Howard: “Good story.”

Amy: (Talking about It’s A Wonderful Life.) “It’s great. It’s Christmas time, and Jimmy Stewart’s really depressed and he’s gonna jump off a bridge and kill himself.”
Stuart: “Don’t need to see it, living it!”

Howard: “It was for this power trio I tried to put together in junior high, but I was short two friends.”
Raj: “What is it?”
Howard: “Footprints on the Moon.”
Raj: “I just got chills.”
Howard: “So did I.”
Stuart: “Me too. But I might have Lyme Disease.”

Raj: “Hey Stuart. You want to hang out tomorrow night? Maybe grab a bite to eat or catch a late night movie?
Stuart: “Yeah, I’d like to, but I’m a little tight on funds.”
Raj: “No problem, my treat. I’ll swing by after work.”
Stuart: (After Raj leaves) “I could do worse.”

Stuart: (After he moves a box, a piece of ceiling falls down right where he was.) “That could have killed me… Can’t catch a break.”

Penny: “Hey Stuart.”
Stuart: “What brings you guys in here?”
Bernadette: “We were looking for a recommendation about comic books.”
Stuart: “Oh, well, I recommend you don’t open a store and sell them.”
Penny: “No, we were just wondering why the guys like this stuff so much, so we thought we’d give it a try.”
Stuart: “Oh, okay. What do you think you might be into? Superhero, fantasy, graphic novels, manga? (To the male customers) I swear I will turn a hose on you.”

Penny: “Okay, don’t be offended, but what went wrong with you?”
Stuart: “I guess I assumed at this point in my life, I would be married or in a relationship, or even have a pet that didn’t run away or kill itself.”
Bernadette: “That really happened?”
Stuart: “I mean, I can’t say for sure, but I swear that rabbit looked me right in the eye before it hopped in front of that car.”