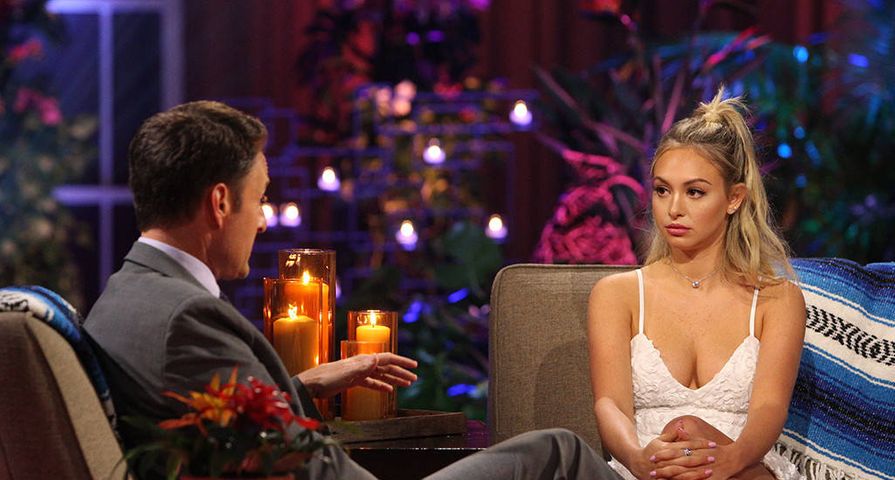 Corinne Olympios was finally ready last night to tell her side of the Bachelor in Paradise scandal that blew up the media this summer.

Olympios sat down with Bachelor host Chris Harrison on last night’s episode and spoke out for the first time regarding the controversial misconduct that shut down production of the show. “This is my first time talking about what happened and my take on things and I would love for everyone to just have a better understanding of me,” she began.

“The first day, unfortunately, I don’t remember much of,” Corinne confessed. “I definitely overdrank, I did. I was also on some medicine that you’re not supposed to drink on, which I didn’t know. The combination of the two is just not a good combination, I am now weaning myself off that medication.”

Throughout the sitdown, Corrine was asked if she has any hard feelings towards DeMario. “I honestly don’t feel like he did anything wrong,” she explained. “I really just want people to know that I don’t blame DeMario. I never pointed fingers at DeMario. I never said a bad word about DeMario.”

Corinne also confessed she has not spoken to DeMario proceeding the controversy and Chris Harrison asked what she would say if she could speak to him.”I would want to tell him, like listen, I respect you as a human. I have nothing against you. I am so sorry you had to go through this. I know exactly what it feels like…and I wish you all the best and I’m sorry.”

Bachelor in Paradise airs Mondays and Tuesdays at on ABC.