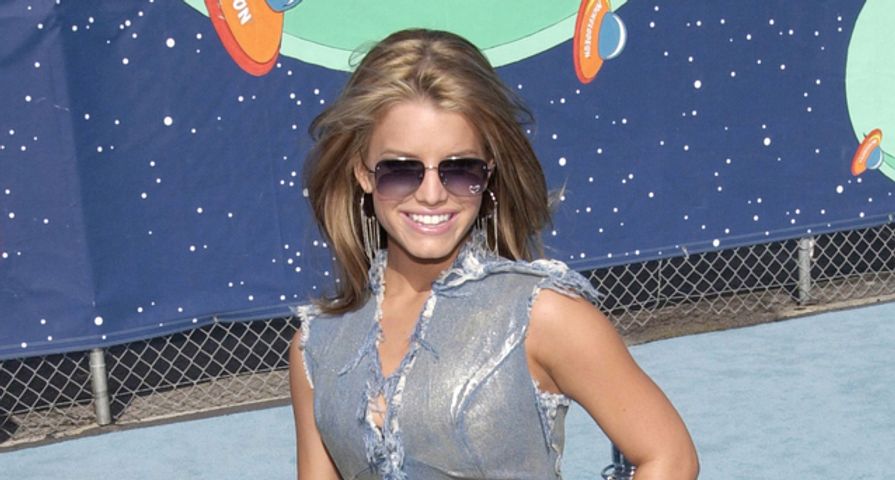 Jessica Simpson was one of the most stylish stars in Hollywood between 2004 and 2006. Her street style was great and so was her red carpet fashion. Sadly, since then, it’s been hit or miss.  We decided to take a look at Simpson’s fashion starting when she first showed up on the pop music circuit. From pop princess to fashion mogul – check out Jessica’s fashion evolution!

Jessica Simpson showed up at the 14th Annual Kid’s Choice Awards wearing this awful denim number. Many celebrities made mistakes with denim during this era, most notably Justin Timberlake and Britney Spears. Simpson had said that around this time that she was trying to adopt a sexier, more “mature” style. She broke up with longtime boyfriend Nick Lachey and began showing up at appearances wearing revealing outfits. Sadly, her reinvention didn’t make her a more popular singer.

The former reality TV star attended the 61st Annual Golden Globe Awards in this simple white gown. The neckpiece looks a bit weird and the dress itself isn’t especially flattering on her curvaceous figure. Simpson was becoming a big star at this point. Her reality TV show “Newlyweds: Nick & Jessica,” which followed her and her then husband Nick Lachey as they navigated married life, was a huge hit and made her into a household name.

Jessica Simpson looked amazing at Clive Davis’ Annual pre-Grammy party wearing this strapless, knee-length sparkly black dress. She attended the party with her husband of almost three years, Nick Lachey. 2005 was an eventful year for Simpson. She won the coveted role of Daisy Duke in “Dukes of Hazzard” – Britney Spears had reportedly been up for that part – and she decided to end her marriage with Lachey, which took him by complete surprise.

The former pop singer hosted the 2006 Teen Choice Awards with one of her former rumored love interests, Dane Cook. These two reportedly hooked up on set of their movie “Employee of the Month.” Her ex husband Nick Lachey also attended the award show, but he didn’t end up running into Simpson. It probably wouldn’t have been such a bad thing for her if they had though – she looked amazing in this cream colored cocktail dress.

Jessica Simpson looked exquisite in this strapless sequined Hervé Légér gown with Jimmy Choo heels and a Bulgari necklace when she attended a party in France to promote her upcoming film “Major Movie Star.” It was around this time that Simpson parted ways with her on-again off-again boyfriend, John Mayer. Although some expected these two to get back together, a reconciliation wasn’t in the cards. Simpson ended up moving on to football player Tony Romo.

The Late Show with David Letterman – 2008

The “Price of Beauty” star kept it simple in this navy blue Hervé Légér Aveline Cap Sleeve Dress with Christian Louboutin Armadillo Satin pumps when she appeared on “The Late Show with David Letterman.” A lot happened in 2008. Her relationship with Tony Romo ended and she returned to music with a country single, “Come On Over.” Although the single was popular, she was booed when she performed at the Country Thunder Festival in Wisconsin.

Jessica Simpson wore a black jumpsuit to the Operation Smile Gala where she and her family were presented with the Operation Smile Founders Circle Award for their dedication to improving the lives of children throughout the world who suffered from facial deformities. This isn’t our favorite look on Simpson. The jumpsuit doesn’t look like it is well tailored and it ended up making her look heavier than she actually was – not a good sign.

The former movie star chose a classic silhouette for the Vanity Fair Oscar Party. She wore a black Carolina Herrera faille one-shoulder gown with a diamond and platinum brooch by Neil Lane. A newly single Simpson walked the carpet with her hairstylist and BFF Ken Paves. She had been dating Smashing Pumpkins rocker Billy Corgan and he had nothing but nice things to say about his ex. “I think if people knew her like I knew her, they would love her like I do,” he said. “It’s really simple.”

A noticeably curvier Jessica Simpson opted for an Etro printed dress from the Spring 2011 collection with a gold clutch and Giuseppe Zanotti La Rocque wedges to Us Weekly’s Hot Hollywood Style Party. She was all loved up at this point with former football player Eric Johnson. A month after this event, he proposed to Simpson with a Neil Lane ruby ring. “I love him!” she told People. “I couldn’t ask for a better man in my life right now.” Judging by the long list of duds that she has dated, we couldn’t agree more!

The fashion mogul – who happened to be very pregnant with her daughter Maxwell at this point – wore this sequined Dolce & Gabbana strapless dress with a pair of Christian Louboutins to the TCA Winter Press Tour All Star Party. Simpson was doing press for her upcoming show upcoming reality show “Fashion Star.” She was set to be a style mentor along with Nicole Richie and John Varvatos. Sadly, the show was canceled after two seasons.

Jessica Simpson showed off her svelte figure in this bright yellow dress with white pumps at the John Varvatos 11th Annual House Benefit. She has struggled with her weight for years; however, she is looking really trim and toned these days after finally losing the 50 pounds she gained while pregnant with her son Ace. It looks like Simpson plans to keep the weight off for good. She is following Weight Watchers and exercising regularly.