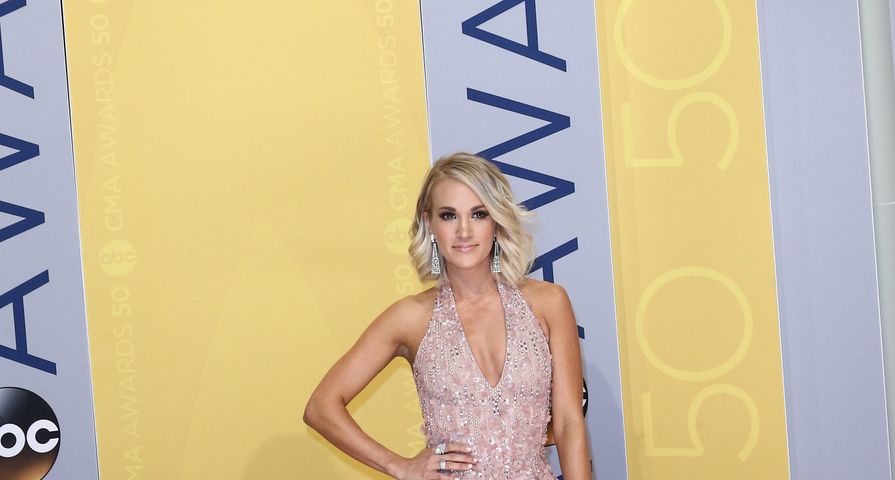 Last night, a lot of country music’s biggest stars descended upon the Bridgestone Arena in Nashville, Tennessee for the Country Music Association Awards. The night was even bigger than usual as it was the 50th year of the awards show, and it did not disappoint as many stars outside of the country world such as Jennifer Garner, Peyton Manning, and Beyonce were all on hand to partake in the event. As always, all eyes were on the stars as they made their red carpet arrival, and there were a lot of gorgeous gowns being shown off. Early November did not stop many stars from donning bright colors and floral patterns, making it hard to narrow down five of the best dressed! While everyone looked great, these seven country music ladies were the show stoppers with their red carpet fashion!

Over the past year or so, capes have become a staple in red carpet fashion at major celebrity events, but many times they look odd. That was definitely not the case for Lady Antebellum singer Hillary Scott who is one of the few celebrities who can rock a cape and looked stunning in her all white ensemble. She matched the bright white with dark lipstick and makeup, creating an amazing look.

At any major event or awards show, there are always a few stars who take a risk with unique or unusual fashion choices, and while often it doesn’t work out, it most definitely did for Sugarland’s Jennifer Nettles! The gorgeous star showed off her amazing physique in a form fitting red dress with leaf and floral embellishments across the top and down to her hip. She completed the look with Pasquale Bruni diamonds and strappy heels, and while the dress may have been better if it had a full cap sleeve on both shoulders, it is still a great look.

Raelynn looked magical in her light gray floor length gown. The embroidered bodice connected perfectly to the flowing skirt, and she matched her silver rings perfectly to the shimmer of the embellishments. Even better, her simple updo and light blonde hair really made the singer look like a modern fairytale princess.

Maren Morris was a big winner inside the show thanks to her huge New Artist of the Year award win, and the night began with her rocking the red carpet. The “My Church” singer went retro with ombre curls, and chose a unique sequin-embellished gown that hugged all of her curves. She finished the look of with smokey eye makeup and could not have looked any more ready to take the CMAs by storm.

Miranda Lambert’s look was both sexy and sultry without being too revealing and it resulted in the country star looking absolutely fantastic. She once again hit the red carpet with boyfriend Anderson East, but all eyes were on Lambert with her black gown which featured lace detailing and a halfway slit. Her dark makeup and pulled up hair finished off the look!

Kelsea Ballerini made jaws drop when she arrived in a gorgeous Michael Costello gown featuring a full flowing skirt, and deep V neck top. The dress with it’s deep burgundy floral designs was definitely gorgeous, but Ballerini topped the whole look by matching her dark lipstick and letting the dress steal the show with her simple side swept hair.

It seems that, if there is a country awards show, Carrie Underwood more often than not finds herself at the top of the best dressed list and the CMAs were no exception. Although she pulled off more than 10 amazing outfits as the co-host of the night, her arrival gown was arguably the best. Underwood rocked a pale pink plunging halter gown covered in sparkling beads, a look she completed with huge Butani earrings and perfectly tousled waves in her hair.