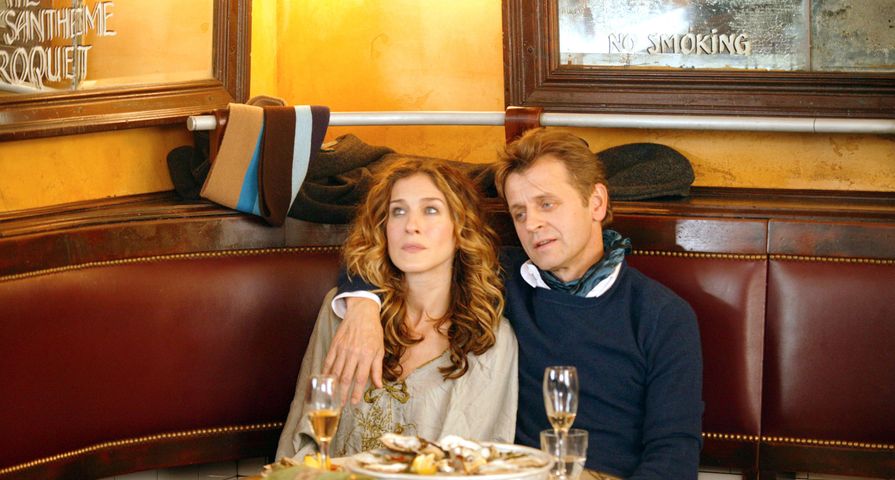 The TV world is filled with fantasies — and its couples are no exceptions. Do you ever wonder how certain guys could have ended up with women who are way out of their league? Or how two people with absolutely nothing in common are suddenly soul mates on their show? We understand that sometimes a show needs some new energy and momentum to get through a long season, but these weird romantic matches can be a little unbelievable. Here are our picks for the 9 most mismatched couples on TV:

Megan is quite a bit younger than her boss, Don Draper — but given how handsome and charming Don can be, we don’t think it’s totally crazy that Megan would go for this guy. Still, their romance was doomed from the start. After seeing Megan be a sweet and patient stepmother to his children, Don had a crazy notion that he could slide into some idyllic perfect marriage. Um, Don, have you met you? From the get-go, Don was unable to be a supportive husband as Megan pursued a career in the impractical, soul-crushing and competitive world of acting. Much of their marriage consisted of phone calls from Los Angeles to New York, and when Don went to visit Megan in California, he stuck out like a sore thumb in his Madison Avenue suit. Megan and Don were doomed from the start.

Bernadette is supposedly a nerd just like Howard and the rest of the guys on long-running CBS sitcom The Big Bang Theory — but is she really? The adorable blonde scientist somehow ends up with Howard, the fashionably-challenged, immature guy who lives with his mother (there’s a very creepy dynamic there, by the way) and never knows what to say to women. We’re glad that Bernadette has taught Howard some much-needed lessons, but would she ever really date him in real life? You can do better, girl!

7. Andy and Ann (Parks and Recreation)

Now, we love Rashida Jones, Chris Pratt, and the characters they both played on NBC’s Parks & Recreation — and both actors are hella attractive, so this isn’t a matter of mismatched attractiveness. But when we first meet Andy on the show, he’s a well-meaning but intelligence-challenged loser who ends up living in a hole. Meanwhile, Ann is a pretty, successful nurse — so how in the world did she end up dating this guy? We understand that it can be tough out there, and Pawnee is a pretty small town — but it made a whole lot more sense when Ann dated Chris (Rob Lowe) and Mark.

Can we get rid of the old dude and the hot younger woman trope? Yes, we know it exists in real life — but it’s actually not that common outside Hollywood, yet we see it all the time on TV and in movies. On ABC’s family comedy Modern Family, Jay is a curmudgeonly old man and Gloria is a lively, young, attractive woman with a young son. Are they really a believable match? Gloria doesn’t seem like a particularly money-hungry woman, and it’s not like Jay is the richest guy in the city (what does he even do, anyway?) Gloria is also someone who seems resourceful and smart enough to find a job to support herself and her son.

5. Doug and Carrie (King of Queens)

Women love funny men — but is delivery man Doug (Kevin James) on King of Queens funny enough to win the heart of the super-attractive Carrie (Leah Remini)? From 1998 all the way until 2007, TV said yes. Even Leah bought into it too: she said in an interview, “He made me laugh in the first two seconds of meeting him,” she recalls. “It was just instant chemistry. Really, Kevin was the reason I did [the show]. Kevin was very disarming when I walked in the room. Kevin smiles with his eyes, and there’s something so sweet and warm about somebody like [that]… Their soul comes out. He was one of those people to me. So, I fell in love with him, and he was my ‘husband’ for 10 years.” All right, we’ll take your word for it.

Ross and Rachel were already kind of a stretch on Friends — Rachel basically gave in after Ross pined for her for years. But eventually we grew to love the dynamic between Ross and Rachel. The couple we couldn’t quite buy was Rachel and Joey. Yeah, remember that? Late in the series, Rachel and Joey started having feelings for another — while Rachel was pregnant with Ross’ baby. I’m sorry, what? We know that pregnancy hormones can be crazy, but Joey?? If you choose to pretend that this chapter of Friends never happened, we won’t blame you.

3. Carrie and Aleksandr Petrovsky (Sex and the City)

We never liked Carrie and Big together on Sex and the City, but we at least believed that Carrie would succumb to the mysterious, unavailable charm of the high-society Manhattan bachelor. The guy who wasn’t as believable was Aleksandr Petrovsky, the Russian artist who took Carrie away from her beloved Manhattan and brought her to Paris, where she was impossibly lonely without her three best friends. What were Carrie (and the show’s writers) thinking? You can’t take Carrie away from her girls! Even worse was that Petrovsky was old, unromantic and insensitive. He expected Carrie to just wait around and be his accessory when he needed one, but he never cared about what she wanted.

George and Callie were both lovable characters on the endless carousel of couples that is Grey’s Anatomy – but did you ever believe that they were in love? They were such a serious couple that they ended up getting married, but soon George stopped paying attention to Callie and their marriage started flat-lining. The universe clearly had other plans for Callie, who went on to date women, and George, who went on to get killed by a bus. Romance!

Pretty much every guy on Gossip Girl falls in love with Serena, so it’s no shock that Ben Donovan does too. But what complicated their union was that this happened when Serena was in boarding school and Ben was her teacher. We find out that Serena’s mom even brought rape charges against him. Where it gets a little unbelievable is that a few years later, Serena finds out about what her mother did and feels guilty, so she goes to find Ben and apologize. The spark gets ignited again and they begin a very silly and unbelievable romance, despite a lack of chemistry. Even Dan Humphrey seems like a better match for Serena.