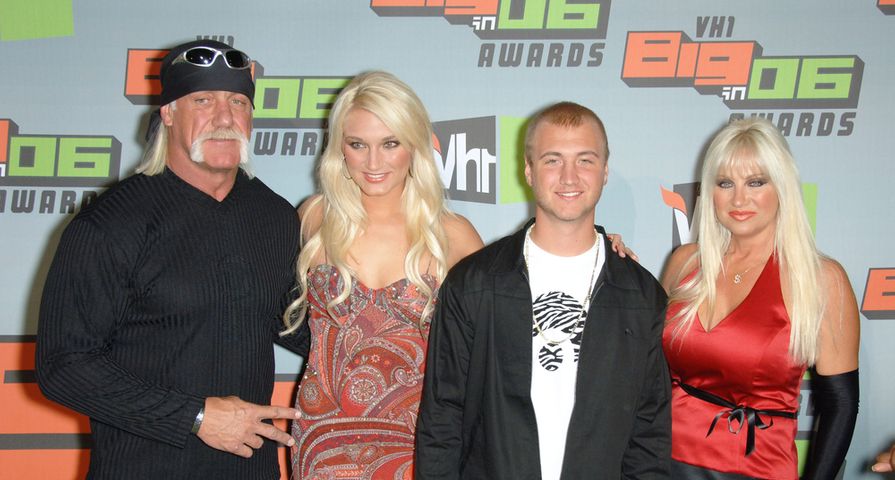 Some celebrities don’t have any boundaries and it shows by the inappropriate relationships they have with members of their own families. We’re not entirely sure how these strange relationships develop but, after close inspection, we have discovered that they are all over Hollywood and that many of the people involved are totally oblivious to how creepy they behave. We decided to find the most inappropriate of these familial relationships. While some of them might not be especially shocking, some of them definitely are – and many of them are still going strong! Here is our selection for the 12 creepiest celebrity family relationships! Check them out:

Khloe and Rob Karadashian have one of the most bizarre relationships. These two have joked about having a sexual relationship more than once and, each time that they do it, it gets creepier and creepier. On Instagram, Rob raised a few eyebrows when he posted Khloe’s photo shoot for Cosmopolitan, calling her “baby mama.” “My beautiful baby mama [Khloé] looking fine as always on the cover of Cosmo UK,” Rob wrote. According to Khloe, baby mama and sister mean the same thing in Rob’s world. Maybe so, but that doesn’t justify Rob’s Valentine’s Day gift for his big sis: a racy lingerie set! That’s just not right.

Celebrity parents from Tom Brady to Hilary Duff have been shamed for kissing their children on the lips, and while some might find that inappropriate, it is definitely much worse when the child isn’t a child anymore. Instead of fatherly embraces, Aerosmith rocker has been known to share lip locks with his daughter, Liv. If it had happened only once, many wouldn’t be so creeped out, but the father-daughter duo’s lip-to-lip kisses that seem much too affectionate have happened a few times.

Whitney Houston’s daughter Bobbi Kristina and her adoptive son Nick Gordon shocked the world when they announced that they were dating and that they planned to marry. Houston never formally adopted Gordon; however, when he and Kristina were growing up, they considered themselves brother and sister. Even though their other family members didn’t approve of their relationship, these two tied the knot earlier this year. Things only got worse however when Gordon was accused of abusing Bobbi Kristina and was blamed when she was found unconscious in a filled bathtub in early 2015 and eventually passed away six months later in late July.

Proud parents have no issue in calling their children beautiful or handsome, but Ashlee and Jessica Simpson’s father, Joe Simpson, raised many eyebrows with the comments he has made about his oldest daughter. While Joe made comments in the early 2000’s about wanting to be the only central man in their life and referred to himself in the third person as “Daddy” many found it disturbing that he really wanted Jessica to be in Maxim. Things only became more creepy in 2004 when he reportedly stated, “Jessica never tries to be sexy. … She just is sexy. If you put her in a T-shirt or you put her in a bustier, she’s sexy in both. She’s got double D’s! You can’t cover those suckers up!” Commenting on your daughter’s breasts and her sexiness definitely lands you in the creepy category.

Angelina Jolie shocked the world when she passionately kissed her brother on the lips at the Academy Awards and the Golden Globe Awards and then announced during her acceptance speech for the Best Actress Oscar that she was “so in love” with him at that moment. Some people were convinced that these two were in some sort of incestuous relationship; however, after all the flack they received, they were never caught kissing in public again.

Woody Allen hooked up with Soon-Yi while he was dating her adoptive mother Mia Farrow. Even though she was never adopted by the critically acclaimed director and screenwriter, he was the only real father figure in her life and he ended up seducing her and convincing her to abandon her adoptive family and go off with him. Allen’s putative son Ronan is pretty disgusted by the whole situation. “He’s my father married to my sister. That makes me his son and his brother-in-law. That is such a moral transgression,” he said. We agree.

Long before he was President, businessman Donald Trump was thought to be highly inappropriate as he has made several strange comments about the looks of his own daughter, Ivanka Trump. When asked what he and his daughter both consider their favorite things, Trump answered, “I was going to say sex, but I can relate to [golf and real estate].” In addition, he has said “she’s got the best body” and commented on what he would think if she ever posed for Playboy. “Ivanka posing for Playboy would be really disappointing… not really. But it would depend on what was inside the magazine…I don’t think Ivanka would [do a nude shoot] inside the magazine, Although she does have a very nice figure. I’ve said that if Ivanka weren’t my daughter, perhaps I’d be dating her.” If outright saying that he would date his own daughter isn’t disturbing enough, Trump completely scarred everyone when he once said, “Yeah, she’s really something, and what a beauty, that one. If I weren’t happily married and, ya know, her father…” alluding to moves he would make on his daughter.

5. Alicia Silverstone and Her Son

Alicia Silverstone received a lot of criticism in 2012 when she posted a video on her website The Kind Life where she fed her son Bear mouth-to-mouth. Critics were worried that the practice – premastication – was unhygienic; however, the “Clueless” star was quick to defend herself. “How it started was simply that Bear – when he was about 5 months old – I’d be eating and he would come at me with his little mouth open and be on my mouth trying to get the food out of my mouth.” Sounds pretty gross to us!

Ryan O’Neal – who was estranged from his daughter Tatum for a number of years – didn’t recognize her at Farrah Fawcett’s funeral back in 2009 and ended up hitting on her! “I had just put the casket in the hearse and I was watching it drive away when a beautiful blonde woman comes up and embraces me,” Ryan told Vanity Fair. “I said to her, ‘You have a drink on you? You have a car?’ She said, ‘Daddy, it’s me –Tatum!’ I was just trying to be funny with a strange Swedish woman, and it’s my daughter. It’s so sick.” Yep, it is pretty twisted!

In her memoir “High on Arrival,” Mackenzie Phillips claimed that she was raped by her father John Phillips when she was 19 and then went on to have a incestuous relationship with him for the next ten years. “My father was not a bad man. He was a very sick man,” Mackenzie said. “If anyone out there can possibly separate his body of work from his personal demons, that would be the honorable thing to do. He didn’t set out to hurt me. He did the best with what he had. He was a damaged guy.”

2. Stephanie Seymour and Her Sons

Former supermodel Stephanie Seymour is unusually close with her two sons, Peter and Harry Brant. This past February, she did a photo shoot with them for Harper’s Bazaar, which raised more than a few eyebrows. During the shoot, Seymour donned a number of sexy outfits – which included dresses and lingerie – all while posing provocatively with her boys. The photos are definitely way too intimate for a mother-son shoot, but something tells us they don’t see it that way!

Over the years, Brooke and Hulk Hogan have managed to consistently make people cringe with their creepy relationship. In 2008, people everywhere were appalled when Hulk was caught on camera rubbing suntan lotion all over his daughter’s behind and, in 2013, he managed to elicit everyone’s disgust when he tweeted a photo of his daughter in a mini dress and high heels with the caption, “Brooke’s Legs.” Sadly, these two don’t see any of this as creepy or inappropriate.