Home » Entertainment » TV » The Most Memorable Episodes Of Charmed 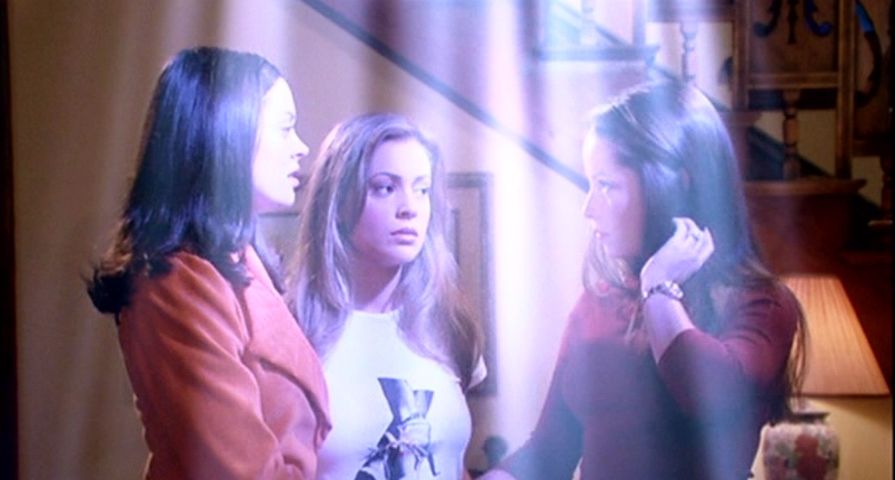 Charmed blew the doors open on regular TV programming when it gave us a supernatural show based on witches. With three powerful female leads, it focused on the relationships of the sisters instead of romantic relationships. Everything about the show was awesome, including the casting, storylines, wardrobe and great dialogue. It was hard not get hooked on the Halliwell sisters. It has been nine long years since the show stopped gracing us with new episodes. Lucky for us, the show is so good that we can keep on rewatching the old episodes. Check out the 10 Most Memorable Episodes of Charmed.

When Charmed premiered in 1998, it was already starting off with an advantage — it was unlike almost every other show on television. Based on three witches, it was one of few shows to not only be centered around the supernatural, but also the only one to carry three female leads with the male actors as only supporting characters. “Something Wicca This Way Comes” is memorable because it was our first introduction to the Charmed Ones. It is literally electrifying when Phoebe reads out the incantation that invokes the powers of the Halliwell sisters, turning them into the most powerful witches to ever live.

Thanks to great writing and very well delivered lines, there are a lot of moments that make almost every episode memorable; however, as a whole, one of the best of the entire series is “Coyote Piper” in season three. By season three, fans had learned the personality of each sister and, even though Prue was the eldest, Piper was also a reserved mother-type figure and that is exactly what makes this episode so memorable. Leading up to her 10-year high school reunion Piper is feeling insecure; however, that changes when she gets possessed by an evil witch who turns Piper into a bar-dancing partier. It’s always great to see the unexpected in the shows we love and for fans there is no easier way of doing that than letting the usual uptight characters let loose.

Just as many shows incorporate a good “flashback” episode into their series at some point, “Morality Bites” is even better because it sends the Halliwell sisters into the future. Phoebe has a premonition that she is burned to death and so all of the sisters travel ten years into the future to figure out why this “medieval” witch burning would happen. It turns out that Phoebe had used her powers to kill someone and the future looks pretty dangerous for the sisters as a local District Attorney is using modern day witch trials as a political platform. Living as their future selves, Piper and Prue are extremely disappointed by their futures, but everyone remembers this episode because of the lesson learned, as well as the intense scene where Phoebe uses her powers for revenge and murder. This whole episode is important for the sisters who have to remember that their powers are meant for protection of the innocent and that it is not their job to punish bad human beings, only demons.

This episode is significant and memorable because “Just Harried” is when our favorite couple, Piper and Leo, finally get married. Of course, given that it is a union between a witch and a whitelighter, their big day is interrupted by a lot more than a problem with decorations or makeup. Prue ends up ruining the wedding after it is discovered that she is wanted for murder for something she did while she was sleeping and was projected into her “astral self.” This episode was great, not only because Leo and Piper did finally get married, but because, even though it was about their wedding, it focused of the bond of sisterhood as Phoebe helps Prue come back to her real self.

In terms of anticipation and cliffhangers, Charmed had a lot more to work with. The show almost always left fans stunned during season finales but, season three’s finale “All Hell Breaks Loose,” is definitely the best. The whole thing is action-packed as the sisters defend Dr. Griffiths from Shax, the personal assassin of The Source of All Evil, only to have their magic caught on tape by a news crew. This part of the episode was memorable enough because we all wondered what would happen if their magic was ever exposed and it looked like we were going to get our answer. Then things got worse as Phoebe and Leo are trapped in the Underworld; Piper gets shot; and, at the end of the episode, it looks like both Prue and Piper will die. This leads us to what makes this one of the most memorable episodes of the whole series — Prue really is dead and this is the last we see of her in the series. Not many shows can get away with killing a main character and many don’t. It’s usually just a cliffhanger to find them alive and well in the next season premiere. This isn’t what happened in Charmed though. Prue is killed and the show keeps going.

The Charmed Ones have run-ins with all kinds of magical beings, which is just another thing that makes the show great and this one is very memorable because it is an ode to the popular show, I Dream of Jeannie. Phoebe has to help a woman who turns out to be a genie and she is turned into a genie herself. Aside from the great costumes, this episode was memorable because it intertwined the magical world of genies that had been explored before in I Dream of Jeannie and Aladdin, and integrated them with the the magic that we see in Charmed. We got to see some of the best of Charmed humor, not to mention Leo and Piper are reconnecting after their separation, something that all fans wanted to see.

Early seasons of all shows are usually the best and season one holds many great and memorable episodes for Charmed fans, with one of the all time fan favorites being “That ’70s Episode.” Everyone loves a “flashback” or “back in time” episode and this is one of the best, as the sisters are confronted by a powerful warlock who is immune to The Power of Three. After informing them that this is because he made a deal with their mother, Patty Halliwell, in the past. In order to save themselves from him in the future, they have to travel back to 1975 where Prue and Piper encounter themselves as young children and their mother, who is just learning that she is pregnant with Phoebe. The episode is humorous and also another testament to the show’s focus of family bonds over everything else.

As the 100th episode of the series, we knew it was supposed to be good and we were right. “Centennial Charmed” is without a doubt one of the best and therefore most memorable because the show gets rid of another character. The love affair between Cole and Phoebe was dramatic and complicated on-screen and just as much for fans off-screen who didn’t know whether to cheer for Cole or hope Phoebe ditches him once and for all. The latter half got their wish after Cole alters reality so that Piper and Phoebe never met Paige and The Power of Three was never reestablished after Prue’s death, just so that he could have Phoebe. The altered reality is dark, as Phoebe is in a loveless marriage with him. Piper is on a rampage to avenge Prue’s death and has just divorced Leo, and Paige has to convince them that she is their sister. Although the three make the vanquishing potion, it is inevitably Phoebe who vanquishes him once and for all, ending a huge chapter of the Charmed saga.

The first two episodes of season four are extremely important because we are left reeling over the fact that Prue actually is dead and the Power of Three is broken, both of which made fans wonder how the show would continue. Both episodes were very memorable because, as fans, we realized the show had no problem getting rid of main characters and also because we were introduced to Rose McGowan as Paige Matthews, the Halliwells half-sister. Not only was The Power of Three restored, but audiences’ reactions to McGowan meant life or death for the show. Luckily she was well received and helped us remain hooked for the next five seasons.

Of course, the most memorable episode of them all is when we all had to say goodbye to the Halliwell sisters in the show’s last episode, “Forever Charmed.” The episode garnered 7.7 million viewers, making it the highest-rated debut episode for The WB and, by the time that the last episode aired, it had become the second-longest hour-long TV series that had all female leads. Numbers don’t lie and neither do the loyal fans who, to this day, stand by the show and the final episode, which gave us a bit of hope that there would be a spin-off featuring the children and grandchildren and Billie. The final images of an aged Leo and Piper walking up their stairs as they pass by generations of family portraits still stands out in our minds as we remember everything we had been through via the show over eight incredible seasons.