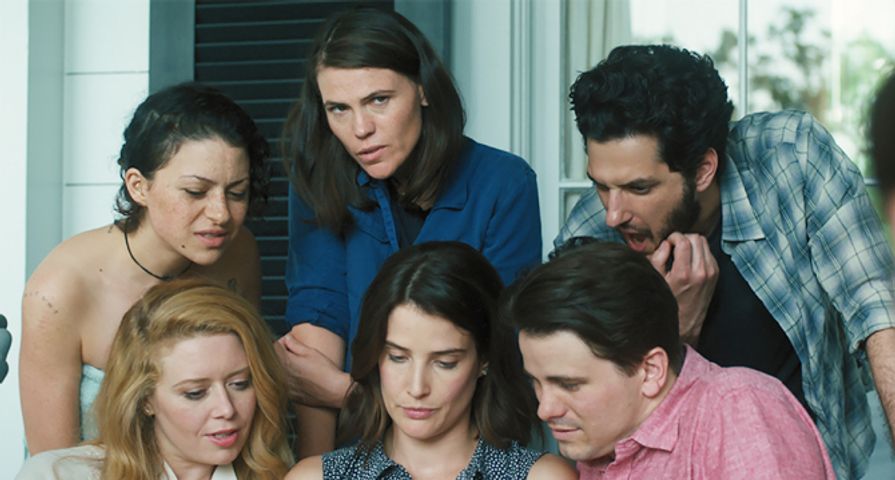 The Intervention marks actress Clea DuVall’s debut as a writer/director. And what a debut it was. Out of more than twenty movie screenings I attended at Sundance, it received one of the biggest ovations I have seen for any film. Many members of the crowd (including myself) were standing and clapping even after DuVall took the stage for the Q&A.

Though many will make comparisons between The Intervention and The Big Chill, DuVall ensures her film stands on its own. A comedy, especially an ensemble comedy, is a difficult undertaking for any director, much less a newbie. However, you never would have known that based on DuVall’s debut film. From its phenomenal cast of indie movie staples, to the well-written script, The Intervention made me laugh more than any other film at Sundance, and I also appreciated that DuVall wrote many of the film’s best scenes to showcase the talent of its actresses, such as a comedic scene between Melanie Lynskey and a peach and a powerful monologue from Cobie Smulders.

The action of the film centers around four couples who reunite at a giant house in Savannah, Georgia to have a nice, relaxing vacation. Those in attendance include Annie (Lynskey) and her long-time fiancé Matt (Jason Ritter), Jessie (Clea DuVall) and her move-in ready girlfriend Sarah (Natasha Lyonne), Jack (Ben Schwartz) and his much younger, free-spirited girlfriend Lola (Alia Shawkat), and Jessie’s sister Ruby (Smulders) and her husband Peter (Vincent Piazza).

But what Ruby and Peter don’t know is that this whole weekend was a ruse. Without their knowledge, the other three couples (minus Lola) have been plotting to stage an intervention that they hope will facilitate the end of the couple’s unhappy marriage. But getting the courage to actually carry out the group’s plan is more difficult than they anticipated. And as the weekend carries on, and more and more is divulged about each couple, it seems Ruby and Peter aren’t the only ones in need of an intervention.

Being an ensemble-driven film, it is most important that the cast have strong chemistry. So, it’s no surprise that DuVall cast many of the best (and my personal favorite) actors working today, who also happen to be her friends. This camaraderie transferred through to the film, especially in the magnetic chemistry each character had with one another. It also showed on-stage during the Q&A when members of the cast, especially DuVall’s real-life best friends, Natasha Lyonne and Melanie Lynskey, became emotional following the audience’s obvious love for the film and excitement that their friend is getting her opportunity to shine.

The Intervention owes many of its laughs to Melanie Lynskey, who (no surprise) gives a brilliant performance. The always-dependable Lynskey can be relied on to carry a character-driven film, which is why she is such a mainstay in the indie scene. And as one of Lynskey’s biggest fans, I was happy that DuVall wrote such a dynamic character to showcase her friend’s comedic and dramatic talents. The rest of the cast, including Lyonne (who had two other films at the Festival), Cobie Smulders, and the ever-adorable Jason Ritter, brought their inherent likability to characters who, on paper, may be a bit lacking.

Although it did have dramatic beats, at its core, DuVall’s hilarious, heartfelt film was a welcomed respite from the more dramatic fare at the Festival this year. I laughed, I cringed, I cringe-laughed and most importantly, I had a great time at the movies.