‘Mob Wives’: 9 Behind The Scenes Secrets 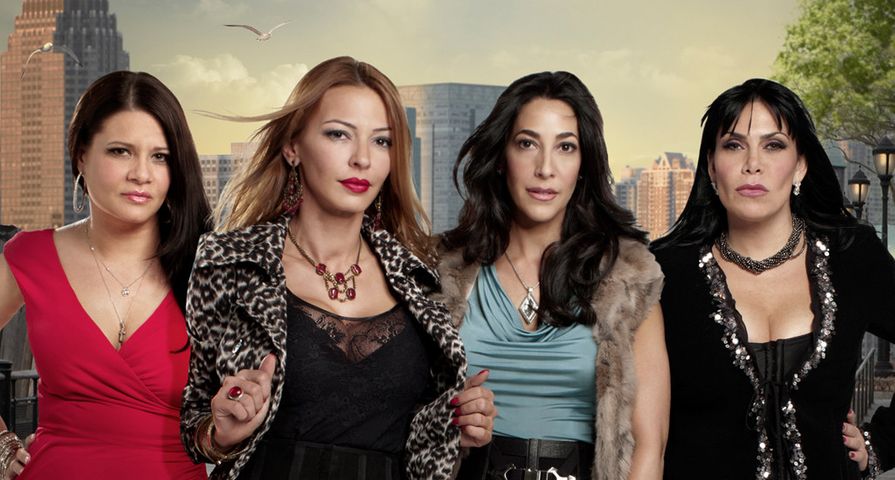 The ladies of Real Housewives have nothing on the cast members of Mob Wives — these women brought the drama to a whole new level! The controversial reality series lasted for six seasons on VH1 and followed a group of Staten Island women whose family members were arrested and imprisoned for crimes that were allegedly linked to the mafia. The show abruptly ended at the end of 2015 after popular cast member, Angela Raiola, known as “Big Ang” passed away from cancer. Here’s a look at 8 behind the scenes secrets from the show:

In an interview with the show creator and producer, Jennifer Graziano, she said the people of Staten Island weren’t supportive of the show at all. They felt like it gave the island a bad rep and didn’t portray what life there was really like, but she didn’t let that stop her from creating Mob Wives. “I really don’t pay much attention to that, to be honest. It’s not giving the borough a bad look. It’s an insight into one subculture that happens to live on the borough. So I think their gripe is a little generalized,” she said.

8. Were the Ladies Actually Friends?

Sometimes with reality shows, it’s hard to tell if the women are genuinely friends off-screen. Many of the cast members on the Real Housewives have admitted to not speaking to their cast mates when the cameras aren’t rolling, but this isn’t the case with the ladies from Mob Wives! According to producer Jennifer Graziano, Carla and Renee have been friends since they were teenagers. Karen and Ramona were both friends with the producer, Jennifer, and all grew up together since they were 15. Karen and Drita met when they were either 19 or 20 and actually lived together for a brief period of time — many of the women have lifelong connections with each other which adds a lot of depth to the show.

Graziano does admit that as the show went on and she had to find new cast members, but it was hard to find women who were “organic” friends of the already existing cast. Natalie Guercio and Natalie DiDonato are two examples of women who didn’t have much of a history with the other cast members when they started. “I would say 95% of it was organic. It started to become harder towards the end because although there were a boatload of women that we could have picked from, not everyone was allowed to do it, not everyone wanted to do it. So in that sense, yes, but if this was an open forum, I could’ve cast Mob Wives for days,” said Graziano.

Anyone who has seen an episode of Mob Wives would know there’s a lot of drama, and a lot of fighting between the cast. These ladies take their arguments to a whole new level and sometimes there’s even a bit of violence. Through the show’s six seasons they saw quite a few cameramen and producers quit because of the level of violence and fighting. “The cameramen, they didn’t like it. ‘This is too f-cking crazy,'” said Drita. “This one guy from the first season told me, ‘I cannot. I have anxiety. I’ve never been on a show this real. This is nuts. I can’t handle it.'”

5. Producer was Friends with Karen and Drita

Mob Wives was much different than many other shows because the producer was friends with many of the cast members which caused a lot of drama behind the scenes, especially when it came to Renee and Drita. “I think all [the women of the cast] didn’t understand the business of it and I think they all, especially Drita, felt that I could whip out the VH1 checkbook out of my back pocket and write them a check for whatever they wanted,” said producer Jennifer Graziano. “It’s just difficult, everyone wants to be the center of attention and everyone wants to be the star. I guess they all at one point or another looked at me as favoring one over the other.”

The biggest catch in terms of casting was Karen Gravano, the daughter of serial killer and government informer, Salvatore Gravano, also known as “Sammy the Bull.” In an interview with the New York Times, Gravano revealed she actually turned down the show when it was first pitched. “She said that it would be all the women’s history and how they moved past it.” She eventually agreed. “I did want to shed light on what the families go through and how you overcome different things.”

3. Cast Tried to get Drita Fired

By the time season 6 came around, things between the women had gotten pretty bad. It was basically Drita, the shows most well-liked cast member on the show, against all the other ladies. Things got so bad that bodyguards were hired during most of the filming in the last seasons and according to a source at the New York Daily News, some of the women were trying to kill Drita off the show so they could get more airtime, which would lead to more money from endorsements and appearances.

Drita D’Avanzo’s family was against her joining the show, but at the end of the day she needed the money. She was launching a cosmetics line and needed some extra cash flow. “Everyone is under the assumption in this lifestyle you have to have money buried under the yard, and that is not the case,” she said. Her friends didn’t like the show at first because when they watched the first few seasons all they saw was her being angry, which is not the person they now off-screen.

In an interview with the New York Post, producer Jennifer Graziano, who is also the younger sister of Mob Wives star, Renee, and daughter of Anthony ‘The Little Guy’ Graziano, who is serving time in a North Carolina prison, said their father disowned them when he heard about the show. “He absolutely has not given his blessing. He’s not very happy at all, to be honest. We tried to explain to him that…we’re not giving away any secrets. But he’s not even speaking to us,” she said.