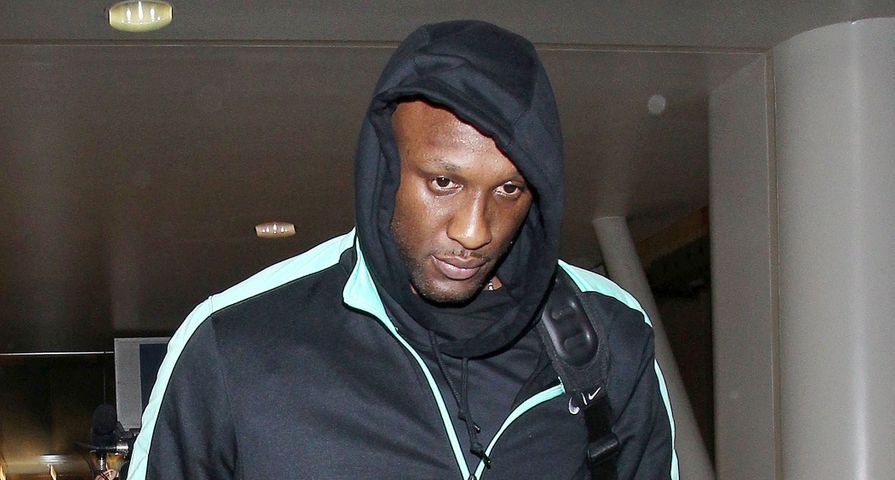 Lamar Odom has endured a lot of tragedy in his 35 years. He has said in the past that death always seemed to be around him. It’s a bit morose, but it’s actually kind of true. When looking at Lamar’s life, there are a lot of tragedies, which date back to before he was a teenager. Here’s a timeline:

When Lamar was only 12, his mother died of colon cancer. His father was reportedly addicted to heroin, so he went to live with his grandmother, Mildred.

In 2004, his grandmother Mildred who raised him died.

Lamar had three children with his ex girlfriend Liza Morales, but their third child, Jayden, died of Sudden Infant Death Syndrome when he was just six months old.

In 2011, the day after his 24-year-old cousin’s funeral (he was reportedly murdered), Lamar was a passenger in a car that that crashed with a motorcycle that went out of control and hit a cyclist. Fifteen-year-old Awsaf Alvi Islam, the cyclist, died from his head injuries the following day. The toll of these tragedies weighed heavily on the NBA pro.

Getting Traded to the Dallas Mavericks – 2012

After playing for the L.A. Lakers for seven seasons, Lamar was traded to the Dallas Mavericks. He didn’t hide his disappointment. Less than a year after the trade, he left the Mavericks and not on good terms. He went back to L.A. and joined the Clippers, but failed to land a contract. This seems to be when things started to go downhill for Lamar.

After only two seasons of Khloe & Lamar, the show was canceled. Lamar reportedly was the one who wanted it canceled. He wanted to focus on basketball and felt that the reality TV thing was getting in the way. Others believed that this was a sign that things weren’t well between him and Khloe.

After weeks of rumors that things were rocky between Khloe and Lamar, one of the basketball pro’s mistresses sold her story to InTouch. Jennifer Richardson claims that she and Lamar had been seeing each other for about a year and that it wasn’t just sex – they were in love. It wasn’t long after this that TMZ reported that Khloe and Lamar had separated.

In August 2013, Lamar was arrested for DUI after he was spotted driving erratically. It is unknown whether he was on drugs or alcohol, as he refused to take a chemical test after he failed field sobriety tests. Rumor has it that he was addicted to crack cocaine, which was one of the reasons why his marriage to Khloe was on the rocks.

Lamar briefly entered a rehab facility after his DUI, but he left after a day. Khloe didn’t even know that he had checked in. He wasn’t responding to any of her calls or texts, so she had to find out about everything online. He had reportedly cut ties with her because her family had been leaking stories about his drug problems to the press.

In December 2013, Khloe filed for divorce. She reportedly held off filing for months because she was worried that Lamar might OD.

In June of this year, Lamar lost two of his good friends in less than a week. Jamie Sangouthai – who had been friends with Lamar since they were kids and had been his best man at his wedding – died of a flesh eating disease that he contracted because of his intravenous drug use. Bobby Heyward – a Hollywood writer and producer – reportedly died of a prescription drug overdose. He had a long history of prescription drug abuse and at one point had even checked into rehab.

This past week, Lamar was found unresponsive at a Nevada brothel. Although the manager of the establishment claimed that the former basketball pro had only been using herbal Viagra, a significant amount of cocaine and opiates were reportedly found in his system. Things aren’t looking good. He has reportedly had multiple strokes since he was admitted into the hospital and some of his organs, including his kidneys, are said to be failing. Sources have said that there is a 50/50 chance he’ll pull through.