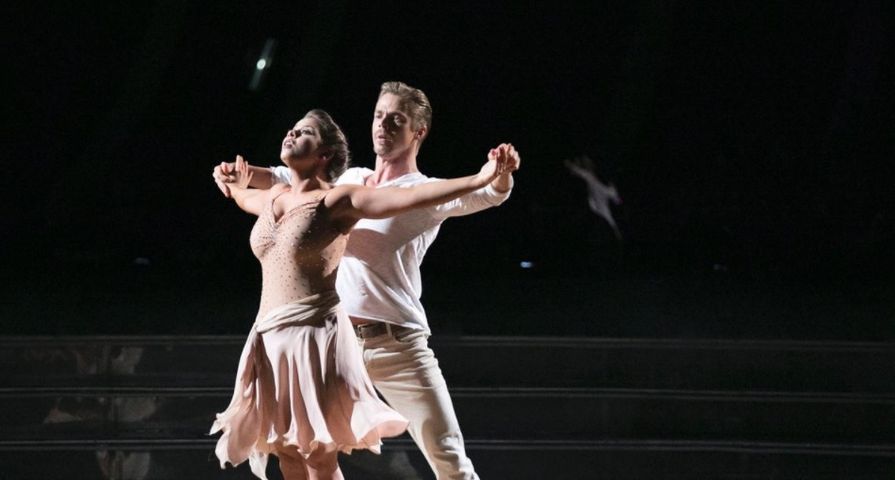 Dance is such a creative and artistic form of expression, and often the most inspiring moments in life come from either heartbreak or heartache, which is why there have been some extremely emotional performances on ABC’s Dancing with the Stars. The ABC reality dance competition show features stars from all different backgrounds, who are paired with a dancing pro to compete for the coveted Mirror Ball trophy. Grab some tissues because we’ve compiled a list of the 10 most emotional performances in DWTS history!

When head judge Len Goodman announced his departure from Dancing with the Stars at the end of season 20, long time fans of the show and the DWTS pros were devastated. Thankfully, he ended up coming back after only one season off, but at the time of the announcement many people thought it was goodbye for good. Before his last show, Nastia Liukin and Derek Hough performed a Viennese waltz as a tribute to Goodman.

It’s not surprising that Indy driver James Hinchcliffe picked 2015 as his Most Memorable Year back in season 23. It was during this year that he suffered the biggest crash of his career when he slammed into a wall at over 220 mph and nearly died after the suspension piece in his car broke and pierced through his upper body. He confronted his past with a sizzling tango with Sharna Burgess as the two celebrated his return to driving and his new found love for dancing. Although the dance was a success, it was definitely an emotional and moving performance for his family and audience members.

When the Most Memorable Year dance came around in season 18, Amy Purdy performed a heartfelt contemporary dance that reflected back on the anguish of losing her legs, but also the strength it took to overcome such a crippling challenge and rise above it all. It’s safe to say this performance earned a standing ovation!

In season 21 Alexa PenaVega used her Most Memorable Year dance to share the story of her years long struggle with bulimia. Despite it being an emotional performance, it had a happy ending with PenaVega eventually overcoming her disorder. Partnered with Mark Ballas, the two used contemporary dance to tell her story with Mark acting as the eating disorder and PenaVega portraying herself. “This was a part of my life that I was always so afraid of people finding out,” she said. “You’re going to watch something that hurt me, but watch me pull through it.”

6. Rashad Jennings Dances for his Father

We definitely weren’t expecting an emotional dance from NFL running back, Rashad Jennings, but he proved us wrong! This past season, the athlete dedicated his Most Memorable Year dance to his father and the year 2006 when he chose his family over his career. He opened up about the tumultuous relationship he’d had with his father, who suffered from alcoholism. Their relationship took a huge turn when Rashad was accepted to college to play football with a promising career ahead of him, but he turned it down after he received a call that his father had suffered a stroke, and had to have his legs amputated due to complications from diabetes. He came back home to support his father and put his career on hold which is “when I began to realize what unconditional love means.” Jennings and his partner, Emma Slater, put on a contemporary dance to Katy Perry’s “Unconditionally” and after their emotional performance, he walked over to hug his wheelchair-bound father.

5. Jodie Sweetin Gets Her Life Back

Everyone has a soft spot in their heart for Full House star Jodie Sweetin, so to see her look back on all the pain and suffering she went through while battling drug and alcohol addiction, it was heartbreaking. Luckily, her Memorable Year story has a happy ending with her being able to find “her shine” again with a career comeback on the Netflix revival Fuller House. In 2016 she was asked to appear on DWTS and at that time she’d been sober for five years. In week three she dedicated her performance to the year 2015 when she was once again welcomed back into her Full House family and felt she “got her life back.”

In season 20 Noah Galloway was brave enough to bare himself and share his story as a war veteran and amputee. His freestyle dance was an ode to what he’s gone through losing his left arm and left leg, but also how far he’s come. Like many of the other stories on this list, Galloway’s was emotional and intense. There’s nothing more heartbreaking about going overseas into the Iraq War to fight and then coming back injured, but alive. His performance with Sharna Burgess earned him a well deserved standing ovation.

3. Bethany Mota Stands Up to Bullies

YouTube star Bethany Mota appeared on season 19 of Dancing with the Stars. For her Most Memorable Year dance she tackled the important issue of bullying. Mota confronted all the people who once bullied her and caused her to struggle with self confidence in a powerful rumba dance with Derek Hough. At the beginning of the dance, Hough literally shoves all of her insecurities away and empowers her through dance to the song “Try” by Colbie Caillat. It was hard not to be inspired by their dance and the whole place erupted in applause afterwards!

In 2017 Olympic gymnast Simone Biles tugged on all of our heart strings when she dedicated her Most Memorable Year performance to her adoptive parents, who also happen to be her grandparents. As a child, her mother struggled with drug and alcohol abuse and was in and out of jail, so instead of bouncing around in foster care which she did for a while, her grandparents decided to legally adopt her. Biles could have picked any of the four times when she won her gold medals, but instead chose something much closer to her heart. Biles and Sasha Farber performed a beautiful Viennese waltz and when the dance ended, she ran right into the arms of her grandparents, who she kindly refers to as “mom and dad.”

1. Bindi Irwin’s Tribute to her Father

There was not a dry eye in the house when Bindi Irwin tackled the Most Memorable Year performance with a contemporary dance dedicated to her late father, Steve Irwin. Not only did she astound the audience with a beautiful performance, but she also landed the first 10 point score of the season! She went on to win season 21’s Mirror Ball Trophy.