Home » Entertainment » TV » 7 Most Disappointing Dancing With The Stars Finales

7 Most Disappointing Dancing With The Stars Finales 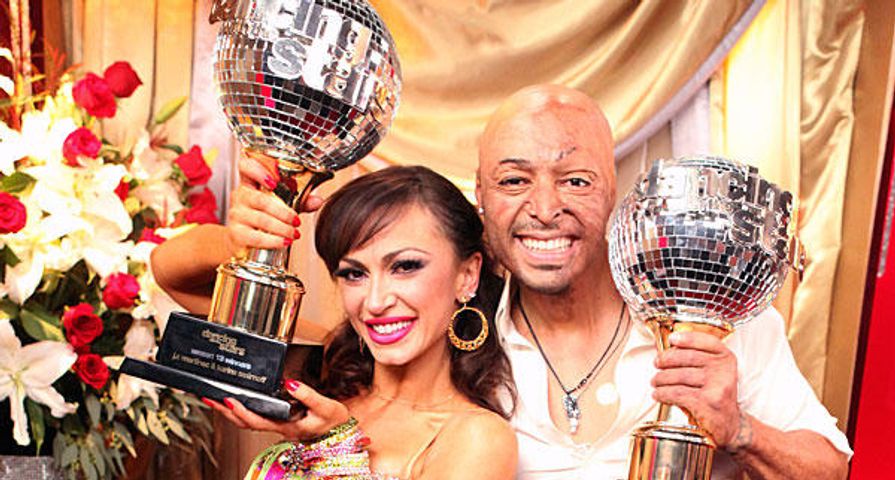 It takes a whole lot of gumption to go on national television and not only learn complex dances but also try and keep up with your professional dance partner. While sitting at home it can be easy to judge what Len would call, “suspect” footwork, you can’t ignore the immense progress Dancing With The Stars contestants make. It all comes down to that final episode when we find out who takes home the Mirror Ball. Sometimes, the grande finale can be a total let down, whether it be due to the wrong finalist declared as winner, finalists didn’t bring their A game, or simply because a real competitor was eliminated too soon. Here are Dancing with the Stars‘ 7 most disappointing finales:

Green Bay Packer’s Donald Driver won over singer Katherine Jenkins and actor William Levy. The competition was tough between these three as the average season score for the contestants varied by decimal points, Katherine with 27.9 and Donald at 27.1. Carrie Ann herself described Katherine as a “Dancing With The Stars Diva” and as a consistent competitor throughout the season. In fact, almost every week they pulled the highest scores, marking their dominance. Although it would have been a close call no matter who won, Katherine was the most consistent competitor and such talent should have been rewarded with the glittering trophy.

Singer Drew Lachey won season 2 over football player Jerry Rice and WWE wrestler and model Stacy Keibler. Many have argued since the airing of this finale that Jerry really shouldn’t have been among the top three. Although Lisa Rinna was eliminated and came in 4th place, she consistently turned out high scores and wowed the judges. This stirred quite the controversy as many viewers didn’t understand how someone producing such low scores could have not only advanced to the finals, but also come in second place.

In season 18 many felt the wrong couple was in the top 3. No one can deny that couple Meryl and Maks easily deserved to win the trophy at the end. Although somehow Candace and Mark made it over James and Peta. The judges clearly saw more talent in one couple over the other as seen with James’ scores clearly surpassing those of Candace each week. It goes to show that in the final episode Candace’s final scores were 12 marks off from the winning couple, proving that the competition wasn’t even close. Many believe that had James and Peta been chosen to move forward, the finale would have been a little more interesting.

Season 12 had a very close top three as the competitors all had roughly the same scores as each other. When it came down to it, Hines Ward beat Chelsea Kane (3rd place) and Kirstie Allie (runner up). Twitter went into an absolute uproar as Chelsea had been the front-runner of the competition for the entire season. Score-wise, Ward and Kane ended within close proximity, so the final rank of the top 3 was brought into question. Many agreed that Kirstie deserved a third place price and the real debate was who had earned the top spot.

Zendaya should have won. It is that simple. Once again DWTS was flooded in controversy about contestants participating even if they had a dance history, but shall I mention Corbin Bleu? However the show really does mark the journey of the performers and until then Zendaya had only studied Hip Hop, a genre I’d consider very different from a Viennese waltz. By pure talent Zendaya should have won — she had the highest overall score average and held the highest score of the week 8 times. Zendaya was in general the more skilled and convincing performer.

A disappointing moment of the season was the elimination of Cheetah Girl Sabrina Bryan! Her lowest score was a 25, and she received the first 30 of the season. Judges were shocked, audience members cried, and a poll stated that this was TV’s most shocking moment in 2007. Sabrina being eliminated in the 6th episode made for the most disappointing finale because she wasn’t there.

So this season finale wasn’t disappointing in the traditional sense. The top two finalists clearly deserved to be there and had been competing neck and neck throughout the whole season. Their final dances both tied with a perfect 30. Either Rob Kardashian or J.R. Martinez could have won the and you could easily justify it. However, it was this that drew a divide in viewers worldwide. The two were so well matched that in the end it just came down to who you personally thought should have won, dancing skills aside.