Home » Entertainment » TV » The Hottest Dancing With The Stars Hookups 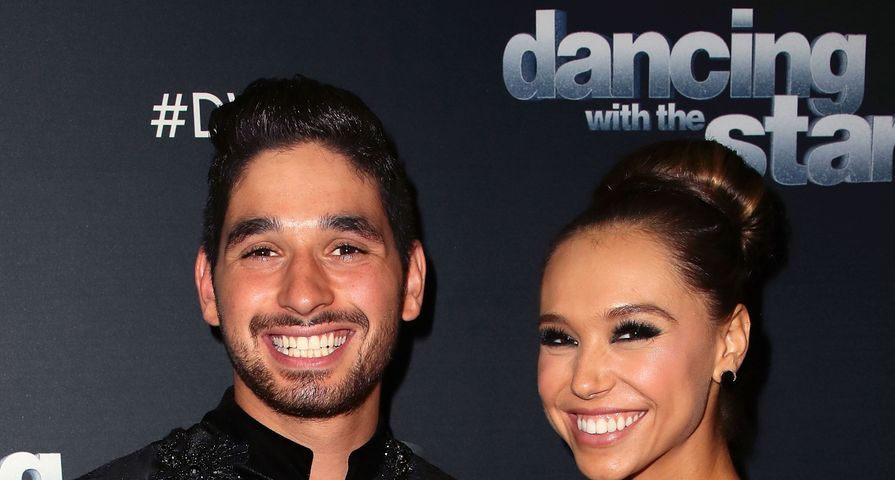 A little romance is inevitable when beautiful people in very little clothing are spending a lot of time in close quarters for long hours and are asked to look into each other’s eyes. Dancing with the Stars (DWTS) has been around for more than 25 seasons and throughout the years there have been a number of really hot hookups. Here are the 16 hottest:

Shannon Elizabeth and dance partner Derek Hough took their chemistry off stage after partnering for season six in 2008. The pair dated for more than a year after the show ended and even moved in together. “When I competed I always fell in love with my partners,” Derek revealed to USA Today. The couple ended up splitting, but Derek maintains that Elizabeth is still his girl.

Season nine viewers were delighted to watch these two heat things up on and off the dance floor, but country singer Chuck Wicks and pro dancer/singer/actress, Julianne Hough, just couldn’t find the time to make it work. Oh, and Julianne fell for Ryan Seacrest while they were still together. Julianne confessed to Glamour, “I had another boyfriend, Chuck Wicks, whom I met on Dancing With the Stars. While we were dating, we went on Ryan’s radio show together.” Seacrest hit on Hough the whole time despite Wick’s presence. “At the end, Ryan said something like, ‘You guys really have something special!’ And I thought to myself, ‘He’s so full of sh-t right now.'” Hough and Seacrest dated for three years after Julianne’s split from Chuck.

This couple hooked up after partnering for ABC’s 20th season of DWTS in 2015. The billionaire and pro dancer have been jet-setting around the world since and haven’t been shy about their PDA or their luxury lifestyle, which is displayed all over Instagram. She and Robert have since settled down. They were married in July 2016 and later welcomed twins, a boy and a girl.

These two supposedly had a brief romance prior to Julianne’s hookup with Ryan Seacrest, and it didn’t end on the best of terms. A source for Us Weekly said, “Julianne told Maks she didn’t want to have a serious relationship,” but then began a relationship with Seacrest. Maks supposedly responded by “planting false rumors that Julianne was cheating on Ryan with Maks.” The heated tension between these pro dancers continued and when Julianne returned to DWTS as a guest judge, she didn’t hold back in her criticism of Maks, suggesting that he was lazy while working with Danica McKellar and was just ‘phoning it in.’ Maks graciously accepted the criticism, only responding after the show by calling the comments “absurd.”

These dancing pros got engaged on New Year’s Day in Las Vegas back in 2009, but pals of the duo said they couldn’t see eye-to-eye when it came to children and called it quits by September. “Maks was ready to start a family and have children with Karina, and he came to realize that wasn’t really what she wanted.” A source close to Smirnoff told PEOPLE that Karina “knew in [her] heart of hearts from the beginning of their relationship that he wasn’t the one for her.”

Alright, so Pia Toscano may have never been a contestant on DWTS, but she did perform on the show and dated pro dancer Mark Ballas. The couple dated for a whopping five months back in 2001. Their busy schedules were blamed for the split as Toscano was recording her first album and Ballas was getting busy with DWTS partner, Kristin Cavallari. The two were spotted together post-breakup, which sparked some rumors of a rekindled romance. But alas, the two apparently live down the street from one another and run into each other all the time. “We’re cool.” Ballas told L.A.’s 104.3 radio station. “She lives down the street, so we ran into each other the other day at Starbucks. It’s cool. We’re still friends. It’s all good.”

Amber Rose and Valentin Chmerkovskiy met when she was partnered with his brother Maksim for season 23 of Dancing with the Stars. The two made their relationship social media official when they posted a photo of themselves kissing. Their relationship then heated up really quickly. She spent time with his family and the two packed on the PDA around New York City. Then, they suddenly broke up in February 2017 after just five months of dating. They say that the split was amicable, but then they erased each other from social media!

DWTS pros Sasha Farber and Emma Slater’s relationship may have begun as a hot hookup, but it became so much more! They met back when they were on the dance show Burn the Floor and Farber knew soon after meeting her that she was “the one.” The couple got engaged during an episode of DWTS and was married on March 25, 2018. Now that they are married, we’re sure it is just a matter of time before they welcome their first child into the world!

DWTS pros Valentin Chmerkovskiy and Jenna Jonhson were rumored to be dating back in the winter of 2016, but that fizzled out pretty quickly. Now, the two are back on and its totally passionate! These two made their relationship social media official and have even opened up about their relationship to the press before eventually getting engaged. Val told Entertainment Tonight that he actually gets jealous when he sees Jenna dancing with other men! “It’s hard. The type of person I am, I mean, I’m fairly jealous. I mean, look, I have all these emotions, you know,” he said. The pair were married in 2019!

This couple had chemistry on and off the dance floor. Bryan was excited the moment she found out “Marky Baby” was her partner. People reported that when Mark’s band, Almost Amy, was performing at a Hollywood nightclub he dedicated the first song to “my beautiful Sabrina.” The couple split in 2007 supposedly due to their hectic work schedules.

Many a rumor spread about these dance partners from season 12 when an Us Weekly insider reported that “they started hooking up almost immediately when rehearsals began. Lacey had a boyfriend (DJ Guthrie, a dancer), but they broke up right before week one of the show.” The sexual energy between the two actually became a problem and show personnel told them to tone it down. When asked about the representative who told the partners to focus “less on raw, pure, sexual tension,” Lacey commented to Us, “Yes, they approached us and said ‘you guys need to tone down the sexual content in what you guys are talking about.’ We are very touchy-feely and we are comfortable with each other,” but she maintains, “it’s more of a playfulness.”

The Bachelor babe was engaged to Whitney Bischoff when he joined the cast of DWTS for their 19th season, but his instant chemistry with dance partner, Witney Carson, was undeniable! When Bischoff didn’t make it to her man’s performance on multiple occasions, rumors flew that the pair were splitting and jealousy was at the heart of their woes. Their engagement was called off in May when, according to a source for OK!, “Chris refused to quit speaking to Witney [Carson] after the show ended.” Soules and Carson took a road trip to Philadelphia, which they documented for all to see via Instagram.

More than one Dancing With the Stars season has featured a showmance, and in season 27 that honor went to Alan Bersten and Alexis Ren. In only his third season as a pro, Bersten was partnered with social media model Alexis Ren and before long rumors of romance were swirling around the pair. In the last few weeks, the two gave in to the showmance and before long were talking about their feelings on camera and even kissed for the first time in a pre-dance video package! Although they insisted that the romance was the real deal, it didn’t take long for the pair to confirm they had split after the season had ended which made many believe the whole thing really was for votes. “Alexis has been in Japan working and Alan is in L.A. rehearsing for the DWTStour, so it’s hard to date when you’re in separate countries,” a source said of the pair choosing to leave their romance on the dance floor. “They care about each other a lot, though, and they continue to be close and talk regularly. No matter what, they plan to always remain in each other’s lives.”

Now, Maks and Peta are one of the most beloved real-life couples to come out of Dancing With the Stars, but their path to love wasn’t so easy. The pair first actually met in 2009 while on the Broadway production of Burn the Floor. At first, Peta thought he was “too arrogant” and they didn’t begin dating until 2012 after both of their previous relationships had broken off. After 10 months of dating, Maks unexpectedly broke up with Peta, breaking her heart. After realizing his mistake the two were able to reconcile and revealed they were dating again in 2015 and in December of that year became engaged. The couple welcomed their first child, son Shai, into the world in January 2017 and were married in July of that same year.

Drew Lachey (Nick Lachey’s brother) was the winner of the second season of DWTS along with his partner Cheryl Burke. When the dancing duo took to their nationwide tour, it didn’t take too long for the press to get a hold of some juicy rumors. Insiders told Star magazine, “They didn’t go very far to cover it up. Cheryl was constantly draped all over Drew. They held hands, had their legs intertwined and were always touching inappropriately.” “Inappropriately” is the key phrase because Cheryl had a boyfriend, Matthew Lawrence, oh, and Drew was married with a child! Perez Hilton even reported that Matthew caught the cheaters in the act. Both Cheryl and Drew vehemently deny that there was anything besides dancing going on between them.

Season three partners, Mario and Katrina, had a turbulent relationship that seemed to be forever on-and-off again. It was a whirlwind romance that sparked the moment they gave in to their attraction. “We actually tried to fight the attraction as long as we could. But obviously, that didn’t last too long at all.” After only six months, Smirnoff moved into Lopez’s Los Angeles home. The couple finally split for good in 2008 after they were forced into a long distance scenario with Karina remaining in Los Angeles and Mario working the Broadway circuit in New York. Rumors of his infidelity flew and Smirnoff called him on it. She told People magazine that, when she talked to him over the phone about his cheating ways, “He pretty much confirmed everything. It felt like world came to an end for a second. I hit the ground, and I couldn’t get up. That was when all the little pieces came together in my head. You come to that realization that this is not what you want out of love and out of life, and this is not who you want to be with.”