Home » Entertainment » Celebrities » Cast Of Blue Crush: How Much Are They Worth Now?

Cast Of Blue Crush: How Much Are They Worth Now? 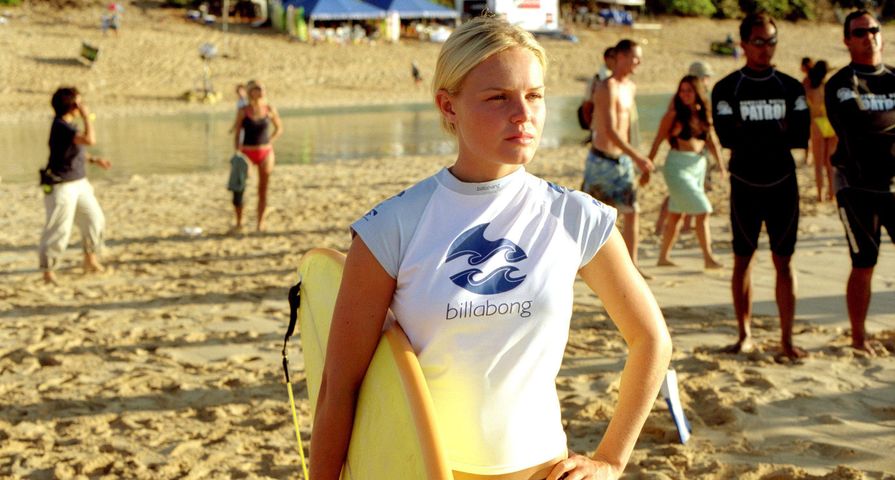 Released back in 2002, this surfer film tells the story of three best friends living in Hawaii who all have a passion and dream to compete and make it big by surfing Hawaii’s North Shore. Kate Bosworth takes the lead in Blue Crush as Anne Marie, the one friend who has the tools to become a pro surfer…with a little help from her friends. At the time of its release, the movie got mixed reviews, but mostly positive and became a huge hit as it went on to make a total of $51.8 million worldwide! It has almost been exactly 16 years since the film was first released, so we’ve decided to take a look back at the main cast of Blue Crush to find out how much they are worth now!

Estimated Net Worth: Unknown. Mika Boorem played the role of younger sister, Penny Chadwick. When filming for the movie she was only 15-years-old! Now 28-years-old and well into adulthood, Mika isn’t widely recognized as an actress in Hollywood, but she’s still managed to build up an impressive resume. He most notable roles on screen have been in Blue Crush, Carolina, Sleepover and Smile. She also starred in movies like The Ward, The Initiation of Sarah, Dirty Dancing: Havana Nights and Hearts in Atlantis. This isn’t all! She makes appearances in huge hits like Jack Frost, Mighty Joe Young, Riding in Cars with Boys and The Patriot. When it comes to television, she hasn’t taken on any main roles, but she had a recurring presence on The Tom Show and Dawson’s Creek. She’s also made one-episode appearances on Ghost Whisperer, House, Ally McBeal, Sabrina, the Teenage Witch and Touched by an Angel. Boorem’s net worth is unknown mostly because she hasn’t taken on many starring roles, although she’s kept up a small film career. We estimate her net worth is somewhere around $1 million.

Estimated Net Worth: $8 million. His real name is Langston Faizon Stantisima, but in the industry, he’s recognized as Faizon Love. He’s an actor and comedian who is well known for taking on roles in comedies like Friday, Elf, The Replacements, Made and Couples Retreat. He’s also credited for big films like: A Day in the Life, Of Boys of Men, The Perfect Holiday, Zookeeper, Brotherly Love, Blue Crush and Wonderland — just to name a few. His resume is stacked with appearances dating back to the early ’90s. Not many are for television, but he has appeared on shows like Black-ish, Mr. Box Office, My Name is Earl, It’s Always Sunny in Philadelphia, That’s So Raven, The Wayans Bros. and The Cartoon Cartoon Show and had recurring roles on The Parent ‘Hood and The Big House. Faizon Love’s doing well and is now worth an estimated $8 million!

Estimated Net Worth: Unknown. This actress, model and surfer comes from a background of Japanese, Hawaiian and English descent. Lake doesn’t have many film credits to her name — her biggest role was the character of Lena back in 2002 which also earned her an MTV Movie Award. After appearing in Blue Crush she developed an interest in acting and went on to star in movies like Cruel World, Rolling, Half-Life and Creature of Darkness. She’s done quite well for herself despite keeping a low profile from the media and film industry. She was the face of Billabong from 2003 to 2011 and is credited as the face that launched Roxy. She was a high ranking model at one point as she’s been featured in magazines like Elle, Vogue, Vanity Fair, W, Cosmo, Sports Illustrated, Seventeen and Teen Magazine. Lake even starred in the Lenny Kravtiz music video, “If I Could Fall In Love.” She no longer acts or models and is focused on her family as a mother of two, so her net worth is largely unknown. We estimate she’s worth around $3 million.

Estimated Net Worth: $30 million. Michelle Rodriguez needs no introduction! She is well known in Hollywood for taking on tough-chick roles and the film Blue Crush was no different. Rodriguez’s best known performances have been in the feature films, Girlfight, Blue Crush, Resident Evil, S.W.A.T, Avatar and, of course, The Fast and the Furious franchise. She’s a critically acclaimed actress who hasn’t won any awards, but she’s been nominated for her roles in Girlfight, The Fast and the Furious, 3 A.M., Blue Crush, S.W.A.T, Fast & Furious 6, Furious 7 and The Fast of the Furious. It’s clear she’s had an extremely successful film career as her biggest roles have been in huge money-making projects. When it comes to television, she’s been just a successful with a main role in the series Lost. It’s no surprise Rodriguez easily has the highest net worth on this list with a whopping $30 million.

Estimated Net Worth: $2 million. This actor is also professionally credited as Matt Davis. Despite his ‘small’ net worth — he’s had an impressive career in film and television. Basically all of his television appearances have been in prominent roles — for example he had a series regular role on the ABC show What About Brian and the CW drama, The Vampire Diaries. He also held a main role on the series Cult and another recurring role on the long-time series CSI: Crime Scene Investigation. When it comes to film, Davis had starring roles in many projects like Legally Blonde, Blue Crush, Below, Into the Sun, BloodRayne, Urban Legends: Final Cut, Tigerland, Mentor, Wasting Away and Finding Bliss. His hard work has earned him a net worth of a small, but mighty $2 million!

Estimated Net Worth: $24 million. Kate Bosworth is a model and actress whose biggest credits have been in Remember the Titans, Blue Crush, Wonderland, Beyond the Sea, Superman Returns, Still Alice and Straw Dogs. Although she started out in television with a small role in two episodes of 7th Heaven, she doesn’t do much small-screen acting. Kate had a recurring role on Young Americans and did a 10-episode television series called The Art of More, but mainly sticks to the film industry. She’s had a starring role in almost every movie she’s appeared in: Heist, 90 Minutes in Heaven, Homefront, Big Sur, And While We Were Here, Black Rock, Life Happens, Another Happy Day, Little Birds, The Warriors Way and 21. Outside of acting, she is a prominent model and even started her own jewelry line with a friend called JewelMint back in 2010. Today, Kate Bosworth has raked up an estimated net worth of $24 million!