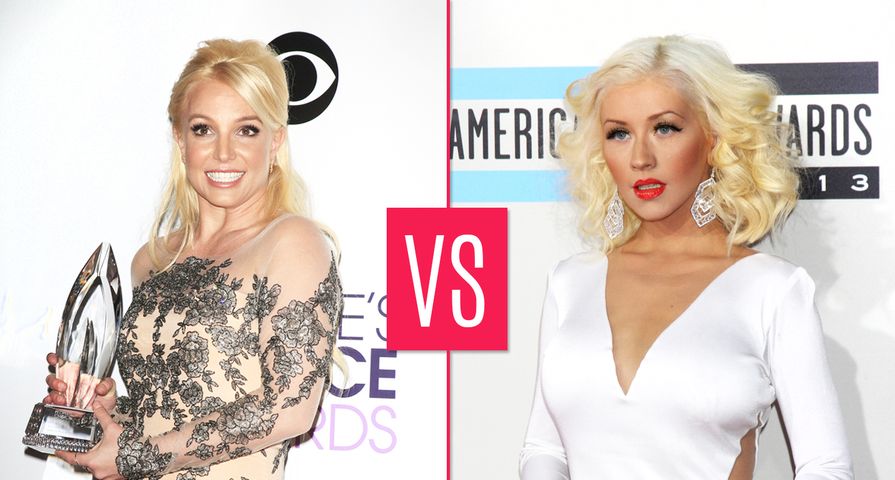 Since the moment they hit the scene in the late 90’s, people have been pitting Britney Spears and Christina Aguilera against each other. This is probably because they both have a lot in common: They both placed second on “Star Search;” they were both on the “New Mickey Mouse Club” together; and they both debuted their pop albums around the same time. Throughout their careers, these two have always demonstrated that they have more in common than they’d like to admit. They may claim to not see each other as competition, but we know better. In the battle of Britney VS. Christina, we want to know where you stand. Vote to let us who you think is the ultimate pop princess!

When they first shot to fame back in the late ‘90s, Britney Spears and Christina Aguilera both had rocking bodies. Spears was super toned and athletic while Aguilera was incredibly petite. As time passed, the “…Baby One More Time” singer settled down and had a couple of children, which caused her to lose her more girlish physique. The “Dirrty” singer also put on some weight with her fourth studio album Stripped, but it all seemed to go to all the right places.

Both of these former Mousekateers have yo-yoed with their weight since. After the success of Stripped, Aguilera got toned and glam for her fifth studio album Back to Basics; however, after having her son Max, she never was able to get it back. Spears was also never able to get her pre-baby body back, but she’s come remarkably close at times. In the battle of Britney vs. Christina, who has the better body?

These two singers both got their starts on the “New Mickey Mouse Club.” They regularly had to perform in front of a live studio audience, which helped them hone their dancing and singing abilities. When they both went out on their own in the late ‘90s, they were both skilled dancers. Britney Spears strutted her stuff in countless music videos, as well as at the MTV Video Music Awards. It takes a very special star to dance around with a snake wrapped around her shoulders. Christina Aguilera is also a fairly provocative dancer. She can rock out with a pair of chaps with a bikini underneath like no one else in the business.

Spears still dances when she performs. She has a residency at Planet Hollywood and, while she no longer has the same skills that she did as a young adult, she’s still better than most of the current pop princesses. Aguilera, on the other hand, doesn’t really dance much anymore. She is more focused more on her singing. When it comes down to who is the better dancer, is it Spears or Aguilera?

Britney Spears and Christina Aguilera were both born to be singers. Both sang their hearts out on “Star Search,” but ended up losing. They honed their skills on the “New Mickey Mouse Club” and then successfully made their pop singing debuts. Since they first became famous, a debate has been raging about which one of them is actually the better singer.

Spears has always been more known for her amazing performances than for having a stellar voice. Her voice isn’t as strong as her main competitor’s; however, it is incredibly unique. She used to have a much deeper singing voice when she was younger; however, since shooting to fame, it has become much more raspy with a sexy quality. Aguilera, on the other hand, is known for having a vocal range that spans four octaves. One thing that critics have noticed about the tiny songstress is that she has a tendency to over-sing at concerts. Who do you think has the better singing voice – Britney or Christina?

Both of these pop sensations have at one point or another fallen from grace. Britney Spears was the first one to fall. After her 55-hour marriage to Jason Alexander was annulled, she married Kevin Federline and, when they divorced, she really began to lose it. She was out partying with Paris Hilton even though she had two young kids at home and then, when they were no longer allowed to be friends, she went completely out of control. She was in and out of rehab, shaved her head and attacked a paparazzo’s car. For a couple of years, things were really bad. In 2008, she was hospitalized for a mental evaluation and was reportedly diagnosed as having bipolar disorder.

Christina Aguilera has also had her fair share of personal problems. After kicking Jordan Bratman to the curb, she jumped into a relationship with a set assistant from her movie, “Burlesque,” and then things started to go downhill. She flubbed the lyrics to the National Anthem at the Super Bowl in 2011 and was arrested for public intoxication shortly after. When it comes to the more spectacular downfall, who wins – Brit or Xtina?

These two pop stars have both fallen from grace, but they didn’t stay down long. In 2008, Britney Spears launched her comeback. She guest starred on “How I Met Your Mother,” released a few albums, went on a couple of tours, became a host on “The X-Factor” and secured a lucrative residency at the Planet Hollywood Resort & Casino in Las Vegas. She may not be the Britney that first shot to fame in the late ‘90s, but she’s back and she’s winning.

Christina Aguilera has also been in the process of launching her comeback. She tried to get back onto the pop scene after the birth of her son Max; however, sales for Bionic were lackluster. She also starred in her first Hollywood film, “Burlesque,” alongside Cher. She’s currently a music coach on “The Voice” and working on her eighth studio album with Pharrell Williams. At the 2015 Grammy Awards, she also took home award for Best Pop Duo/Group Performance for “Say Something” with A Great Big World. This leaves only one question: Which pop star do you think has launched the better comeback?

Britney Spears and Christina Aguilera have both enjoyed a great deal of success. With her snappy dance moves and her sexy voice, Spears is responsible for reviving pop music. Aguilera is no slouch though. With her powerful voice and provocative image, she has remained Spears’ only real competitor.

When it comes down to who has had more overall success, we’re a bit divided. From the beginning, Spears has had an incredible amount of success. Her debut album “…Baby One More Time” is the biggest selling album ever by a teenage artist. Aguilera, on the other hand, has won five Grammy Awards. While Spears has sold over 100 million albums worldwide, Aguilera has only sold 50 million. Both of them, however, are considered among the best selling female artists of the 2000s. When it comes down to who is more successful overall, who wins – Spears or Aguilera?