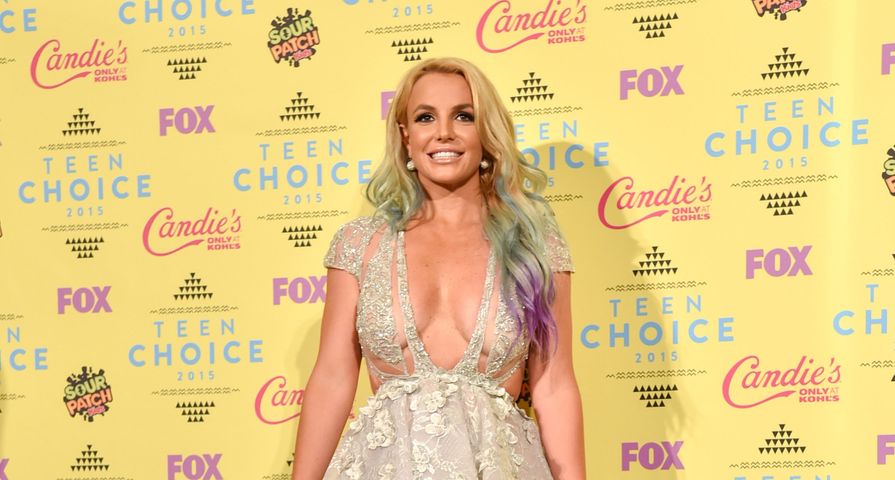 You have to hand it to Britney Spears — no matter what life throws at her, the girl just keeps on going and, even though things looked rocky during her breakdown in 2007, she pulled through and is now the Queen of Las Vegas with her sold out residency. Although she is only 33 years old, she has been a dominating pop star since she was 18 and, as such, was awarded with the Candie’s Style Icon Award at the 2015 Teen Choice Awards. We admire Britney and her strength, but we have to say, she maybe wasn’t the best choice to win a “Style Icon” award as she has had more fashion misses than hits. Don’t get us wrong, the girl is gorgeous but, more often than not, her fashion choices both on and off the red carpet are questionable. Since the ’90s and early 2000s were rough for everyone when it comes to fashion, we can forgive some of those crazy outfits, but unfortunately Spears still doesn’t seem to have a handle on the fashion game. Check Out Britney Spears’ 10 Worst Style Moments.

Baby One More Time… No matter how much time goes by, Spears refuses to give up on the minidress look that was of course popular when she rose to fame in the early 2000s. While her ESPY’s dress wasn’t horrible, it definitely wasn’t great either as it reminds just a little too much of a figure skater’s costume. Sure she has a great body, but she doesn’t always need to be flaunting her cleavage and legs.

It is fair enough that anyone should be able to go about their day in any outfit they choose, but Spears knows she is being watched at every given moment and even she had to have thought this outfit didn’t make the most sense when she headed out shopping. Once again, the plunging neckline is just a bit too much, but the shirt is nothing compared to the fact she matched it with what look like gym shorts, plus the two pieces aren’t even matching shades of black. Sorry Britney, this just does not work.

For the season premiere of The X Factor, which Spears judged, the singer tried something different with a long, covered-up printed dress. Unfortunately, this look isn’t much better than the ones showing a lot of skin, the print is awkward, especially on the arms and the dress is pulling in odd places.

Once again, covering up with a long-sleeved, full-length dress didn’t work out for Spears either when she attended the 2015 Billboard Music Awards. It seems the blonde beauty cannot find the happy medium between too sexy and not sexy at all. After two children and a rocky romantic life, Spears has worked hard to keep herself in shape, but this dress does nothing for her figure and the neutral color just fades in with her pale skin tone and light hair. Bonus points for the classic “awkward Britney Spears red carpet smile” though.

Her smile is gorgeous… the rest of her outfit… not so much. Although she seems to be having a great time, she is distracted from noticing her shirt is not staying up at all. Either the shirt is too big or she needs a strapless push-up bra, but this outfit looks pretty sloppy, not to mention she’s back with the baggy black shorts, which seem to be a favorite for the star.

Yup, we’re pretty sure those are the same shorts from the previous picture and, once again, one of Spears worst style moments goes to her lack of street style. Given the fact that her red carpet choices aren’t always great and she has help in choosing those, it isn’t surprising her own choices aren’t the best either, but we have to wonder sometimes, what is she thinking? This time the baggy black shorts are matched with a too tight top with a matronly lace neckline. The whole thing is awkward, and not fit for a Style Icon.

We have to cut her some slack on this one in hoping she just got done or is heading to the gym for a workout. She may be comfy, but this oddball outfit is just not a great idea to go walking around in public in. If the shirt and yellow shirts weren’t bad enough than the red and blue socks hiked up out of her running shoes really seals this outfit as one of the worst. This is the kind of fashion choice that runs the risk of ending up on the “People of Wal-Mart” page.

Oh Britney. At least her X Factor season premiere outfit was better than her X Factor season finale outfit. Whether you are a fan of the pant-suit fad or not, it admittedly does work well on some people, in some styles, but this is not of them. There is absolutely no shape in this plain black piece and nothing to make it worthy of a major television event. The only thing that makes it worse is the gigantic beaded necklace she paired with it. Maybe her style choices for events isn’t the best, but we know she can definitely do way better than this!

Once again, when you’re simply out and about, it doesn’t matter what you’re wearing but this outfit would probably turn heads for all the wrong reasons on anyone, even if they aren’t Britney Spears. The shirt may have been recycled from her “Oops… I Did it Again” days and is not something that goes with a basic pair of jean shorts. Had she been wearing sandals, it wouldn’t be that bad; however, the oversized UGG type boots plummet this outfit right down to horrible. As one of the most well known pop singers of the past decade, she can afford better wardrobe pieces.

Last but not least is the outfit Spears chose to accept her award as the Candie’s Style Icon at the 2015 Teen Choice Awards in August. As a teen pop princess, Spears has been attending and winning awards at this event for years, but this time was different. At 33, Spears has been ousted from her spot as a pop favorite with today’s teens who now look to Taylor Swift, Justin Bieber and One Direction as their idol, but she was not forgotten and treated as a relic with the Style Icon award. In an effort to appear young, it seems she tried too hard, showing off way too much of her chest in this awkward partially sheer dress. Spears is gorgeous, but this dress did her no favors and, instead of making her fit in with the young stars walking the carpet, it definitely looked like she barely squeezed into this number and it is almost embarrassing to look at. The fact this is what she wore to accept the award should have clued those in that, as awesome as she is, one thing she is not is a Style Icon.