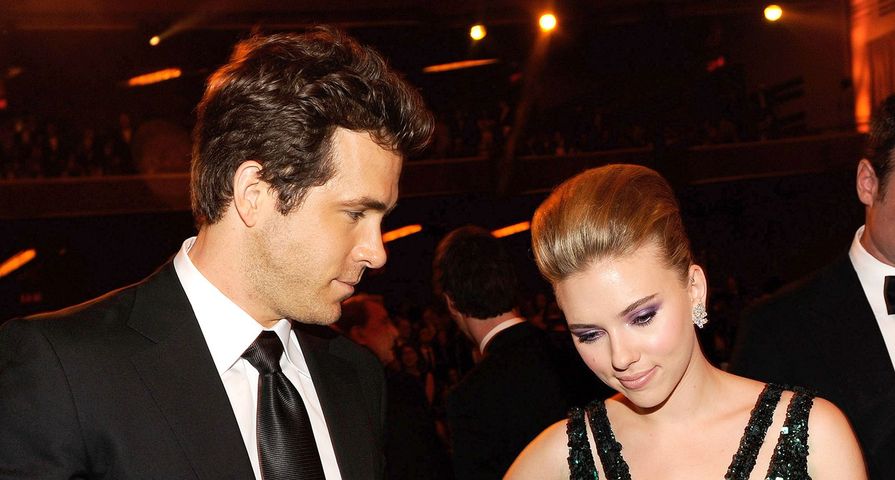 The relationship between Scarlett Johnasson and Ryan Reynolds happened so fast and ended so quickly, many people forget these two were ever together! Another reason people might have forgotten this Hollywood romance ever happened is because they were fiercely private about their relationship. These two were rarely ever photographed together and almost never spoke about each another in the press. Since their split, Reynolds and Johansson have both moved on with new relationships and started their own families with new people — which we love — but we also love looking back on old couples to see how far they’ve come! Here’s a look at 8 things you didn’t know about Scarlett Johansson and Ryan Reynolds relationship!

They started dating in April 2007 and were engaged in May 2008. Scarlett and Ryan fell hard and fast. They got married after only a year of dating in an extremely private ceremony at a remote wilderness retreat outside Vancouver in September 2008. When they exchanged nuptials, Johansson was only 23, while Reynolds was 31. Their rushed marriage was met with criticism as many people speculated she was much too young to get married. In September 2009, even she herself said she hadn’t put much thought into it: “I never really thought about getting married — it just kind of happened. You hope that the relationship makes you better, that you learn things about yourself.” She has since admitted in the press that she married “way too young” and “wasn’t ready.”

7. As Private as Possible

One of the biggest struggles for celebrities is how to maintain their privacy while in the spotlight, and throughout their two year marriage, Reynolds and Johansson were well known for being fiercely private with the details of their relationship. In an 2010 interview with GQ, Reynolds talked about their desire for privacy. “Things change when you get married in general. But in terms of being a couple that’s in a public situation and speculated about and all that nonsense, it’s changed a little bit. I’m a little more guarded. I’ve unilaterally not addressed it…For the most part — I can only speak for me, as one-half of that relationship — I choose to remain as private as possible without being secretive,” he said.

In an interview with Cosmopolitan magazine, Johansson hinted that her marriage to Ryan Reynolds fell apart because of competition in their careers. Neither one of them was willing to give up or sacrifice their career opportunities in order to save their marriage. While she didn’t mention Reynolds by name, it wasn’t hard to tell who she was talking about. “The logistics of being with another actor are challenging. There has to be a real understanding of how you share your time, especially when two people’s careers are going at the same rate. Or even if one person is more successful than the other, that also proves challenging. There may be a competitive thing,” she said.

5. Not Many Date Nights

In 2010, the Deadpool star opened up to People magazine about what the ideal date was with his then wife, Scarlett Johansson. He said, “dinner and a little dancing,” but these two never really got the chance to settle down and date because their relationship blossomed just as their careers were taking off. There was never much time to spend together during their marriage and even Scarlett admitted in an interview with Time Out New York that she was lonely at times. “We have no time for dates. We work and then go home and — I, anyway — just stare at the wall for a few hours before I go to sleep…Like in any profession, it’s difficult. You want to make sure you have time to invest in your family. It’s a challenge, but it’s worth it,” she said.

4. Best Part About Being Married

It’s pretty clear these two both had a lot of respect for one another throughout their relationship. Scarlett and Ryan were obviously close as partners, but good friends as well. She referred to him as her “home” while he called her his “best friend.” Reynolds told People magazine in 2010 that the best part about being married to Scarlett Johansson was being able to hangout with his best friend all the time: “You get to hang out with your best buddy every day. It’s made me a stronger, better person.” Meanwhile, when Johansson was asked about married life by InStyle magazine in May 2010, she said: “I mean, you’re married and suddenly you have your own family. There’s a nice comfort in that. That part of your life is certain, in a way. You’ve got your home in that other person.”

On December 14, 2010 after months of speculation that there was turmoil in the relationship, Reynolds and Johansson publicly announced their split in a joint statement that read, “We entered our relationship with love, and it’s with love and kindness we leave it.” Not surprisingly, their divorce was kept tight lipped, but we do know it ended quite amicably. He filed for divorce and she submitted her reply almost immediately after which tells us their filing was premeditated and agreed upon. “Departing from a relationship and maintaining the idea that this is the same person I married is a great luxury that I experienced. Thankfully I was in a relationship where two people chose to remain on the high road in every regard,” said Reynolds.

2. Why Their Relationship Fell Apart

When news of their divorce went public, a lot of people made a guess as to what went wrong. In 2011, after the dust settled, Johansson confirmed many of the rumors and said their split was essentially due to the fact that they were both way too busy in their own careers and couldn’t handle the ups and downs of a marriage. “Relationships are complicated…and being married is a living, breathing process. I think I was not fully aware of the peaks and the valleys. I wasn’t prepared to hunker down and do the work. Both of us were extremely busy. We spent so much time apart. It’s very difficult. It’s bad,” she said. “You have to be very confident and solid within yourself to have a successful marriage. ”

Scarlett Johansson and Ryan Reynolds might not have worked well as a married couple, but they managed to accomplish a lot things other couples can’t! They maintained their privacy throughout their relationship, had an amicable split and still to this day have never uttered a bad word about the other in the press. Johansson has made it clear she holds no regrets when it comes to her marriage with Reynolds and he’s shared the same sentiment: “I’m a big believer that when something feels right, you should do it. I’m a big believer in instinct. Getting married was the right thing to do because it was natural. It grew out of a romance and love and a desire to have a future with somebody and I was very fortunate that I married somebody who turned out to be the person I thought he would be,” she said in an interview with Cosmopolitan.