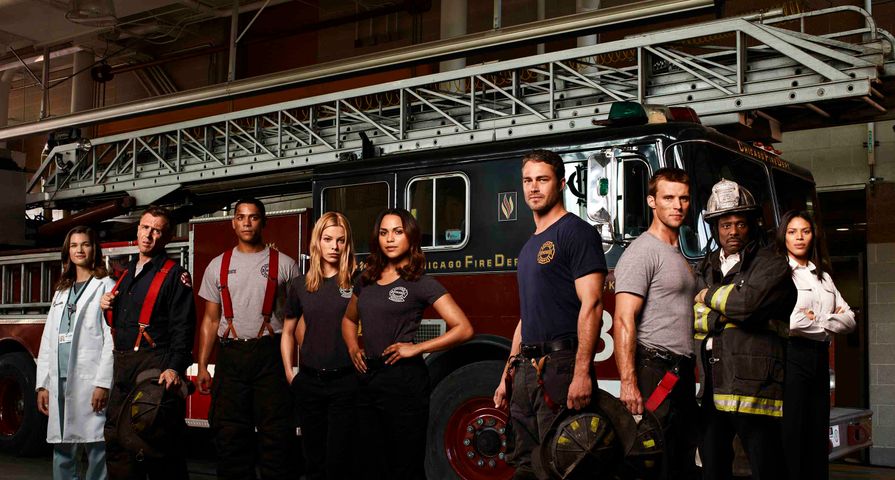 There are endless options for things to watch on TV or stream, and while it seems the police/crime procedural series take up a lot of the market, there are some that stand-out. Chicago Fire began its run in October of 2012, and has done so well that in just five short years it has already produced two spin-off series. Since the series is sure to run for many more seasons, there is plenty of time to jump into it, and if you are already a fan, there is still lots to know about the series! Check out 8 interesting facts about Chicago Fire.

As fans of the series are well aware, Chicago Fire is the series that spawned Chicago P.D., which was originally meant to be a mid-season replacement and turned into a hit in its own right. Showrunner Matt Olmstead said that when they took characters for Chicago P.D. it was like “harvesting organs,” but still left Chicago Fire with an unbelievable cast.

Chicago Fire prides itself in being as true and realistic as possible when portraying the lives and situations of firefighters, but one scene might have been too real. Back in November of 2012, news station WGN-TV reported that a plane had crashed at 29th and Martin Luther King Drive, and even showed live footage of the crash. Eventually the station was told that it was actually a set piece that was pre-stage for the filming of Chicago Fire.

The plane crash might not have been real, but the firehouse featured in the series is. It is a working Chicago Fire Department firehouse and is the headquarters of Station 18, which is located at 1360 South Blue Island Avenue. Despite using the actual Firehouse, some of it is filmed with the set and the easiest place to tell it apart is the Firehouse 51 kitchen. If there is a door to the left of the cooking area in the scene then that is the studio set, but if there is a drinking fountain to the left, that’s the real life firehouse. As well as a real firehouse, it turns out that a lot of the extras who play firefighters are actual firefighters. “They bring their own gear,” co-creator Michael Brandt stated. “They do hoses. …We do everything we can to include them.”

The crew works to make the scenes and equipment used by the firefighters as authentic as possible, but of course there always has to be modifications. The cast actually uses Self-Contained Breathing Apparatus (SCBAs) which are Scott 4.5 Air-Pak 75s, which is one of the most popular and reliable brands used by fire departments across America. The ones used by the cast, however, were made specifically for the series with both the anti-fog interior facepiece and exterior voice amplifier removed, and the regulator had to be mounted at an odd angle in order to show clear shots of the actors’ faces.

The Chicago Fire universe expanded really quickly with the two spin-offs Chicago P.D. and Chicago Med, and it hasn’t necessarily been easy for producers to make all the crossovers work. “The creators and producers had a meeting trying to pull off the jigsaw puzzle of crossing over characters on all three shows,” showrunner Olmstead revealed. “It’s a scheduling… I don’t want to say nightmare, but it’s like Jenga, and people far smarter than I am are working it out.”

The series takes great pride in being in Chicago and NBC has confirmed that they will continue to film there with real locations for the entire series instead of using set pieces in L.A. In the pilot episode they were even able to convince the Mayor of Chicago, Rahm Emanuel, to make an appearance, but he did so with a catch. “It’s easier being mayor than playing mayor. I told them I’d do it under one condition: The TV show is making an investment to the Firefighters’ Widows and Orphans Fund.”

It wouldn’t be a surprise to learn that the stars of the show have become a tight-knit family very much like what happens in real fire stations, but they have an interesting way of bonding. A few of them have started roaming around the city on motorcycles such as Eamonn Walker, Taylor Kinney and Monica Raymund so that they can put on their helmets and not be recognized. “We’ve got our own little biker gang,” Walker joked.

Thanks to the popularity of the show, Firehouse 51 or Station 18 in real life has become somewhat of a tourist attraction. Chicago Fire Department Deputy District Chief Steve Chikerotis acts as a consultant on the series, and revealed the show films there around 22 times per year, and it draws in a crowd. “We have people come from all over the world. We might have 200-300 people that are here… I’ve seen a big increase in the number of tourists coming around.”