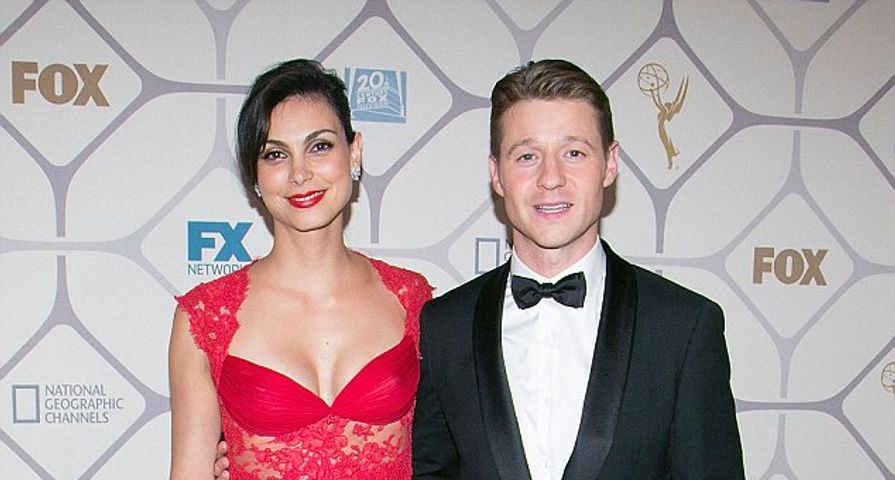 When Gotham co-stars Ben McKenzie and Morena Baccarin went public with their relationship back in September 2015 it was pretty shocking, but also really exciting! Their love story is the classic Hollywood tale of life imitating art as the two have played love interests on-screen for quite some time now. Their relationship has moved pretty quickly, but they’ve also been really private about their personal lives or any kind of details pertaining to their romance. They welcomed their first child in March 2016 and are now engaged to be married. Here’s a look at 8 things you probably didn’t know about Ben McKenzie and Morena Baccarin’s relationship!

We all know Ben McKenzie, who is now 38-years-old, as Ryan Atwood from The O.C.; it’s a role he will forever be tied to. Many people assume McKenzie and Morena Baccarin met on the set of Gotham, but they actually worked together before that! Back in 2006, Baccarin had a guest role on The O.C. during season three as socialite Maya Griffin. We assume this is when the star crossed lovers first met. She appeared in three episodes, but never had any scenes with McKenzie, so it’s unclear how close they were at the time.

7. When Did They Start Dating?

This unlikely couple started dating after they were both cast on the FOX drama Gotham with McKenzie in the role of Detective James Gorden, and Baccarin as Dr. Leslie Thompkins in 2014. It’s unclear when exactly the stars started dating, but they went public with their relationship in September 2015 after they were spotted together at multiple events during the Emmy Awards weekend. One of these was the Fox party where they were seen holding hands. After rumors leaked that the couple were getting cozy, they announced that not only were they dating, but she was also 3 and a half months pregnant! The two have kept fairly quiet about their relationship ever since.

©Fox/courtesy Everett Collection
Things You Might Not Know About Harry Connick Jr. And Jill Goodacre's Relationship

When news broke that the Gotham stars were dating it was pretty scandalous because Morena’s ex-husband Austin Chick had only filed for divorce two months prior in early July. When he filed he cited irreconcilable differences and asked for both joint custody of their son, Julius, and spousal support. Things got really messy when it was revealed that the 37-year-old Brazilian actress got pregnant before or around the time Chick filed for divorce, but in their legal docs, she claimed they had been talking about separating for months, way back in March 2015. It’s really hard to pin down when McKenzie and Baccarin started dating — either they’d been seeing each other for a while or got pregnant right away. From Chick’s point of view, which we can see in the legal docs, Baccarin got pregnant in June 2015 while the two were supposedly “working on their marriage” which made her unfaithful.

McKenzie and Baccarin went public with their engagement when they both attended the 2016 Gotham Independent Film Alwards at Cipriani Wall Street in New York City on November 28, 2016 and Baccrin was sporting a very sparkly, diamond ring. They have not shared any details about wedding plans. Their engagement wasn’t surprising considering Baccrin told the courts she was going to marry McKenzie way back in September 2015. In her legal docs filed for her divorce from Austin Chick, she stated, “Today, I am in a new committed relationship. I am planning to re-marry. Also, I am 3 1/2 months pregnant.”

Their pregnancy announcement came a few days after they went public with their relationship. Ben not only personally confirmed their relationship, but also their pregnancy by retweeting a congratulatory message from his sister, Camille Schenkkan. On September 24, 2015, she tweeted the following: “Couldn’t be happier for @ben_mckenzie and @missmorenab. Welcome to the family, Morena! Also…I’M GONNA BE AN AUNT.”

3. They Have a Daughter Together

Ben and Morena welcomed their first child together, a daughter named Frances Laiz Setta Schenkkan, on March 2, 2016. While on Harry Connick Jr’s talk show, Harry, McKenzie revealed their daughter was named after his mother. “Her name is Frances after my mother. I love that name. We call her Frankie. She’s 7 months old, and the cutest thing in the wold,” he said. Frances is McKenzie’s first child and Baccarin’s second. She shares joint custody of her son, Julius, with her ex-husband.

It’s pretty common in Hollywood for couples to hook up on set, but not many like to work with their significant other day in and day out. There are a few who make it work, and McKenzie and Baccarin are one of them! In an interview with E.T., the Deadpool actress gushed about working with her fiancée and admitted that she probably wouldn’t see much of him if she didn’t! “You get to work with the person you love every single day, and it’s really nice. I think we’d rarely get to see each other otherwise. So it’s really fun,” she said.

During an appearance on Live! with Kelly, Ben McKenzie revealed that he and Baccarin hired a night nurse to help the couple get their precious sleep. “It’s so great. They stay up with the baby the first couple of weeks when the baby is really up all the time. They’re basically — they wake up my lady to get her to feed the baby — but between times when the baby can be cranky and fussy, they’re on it,” he said. But don’t worry, the Southland actor isn’t totally off the hook when it comes to his dad duties! He said he’s taken on diaper duty.