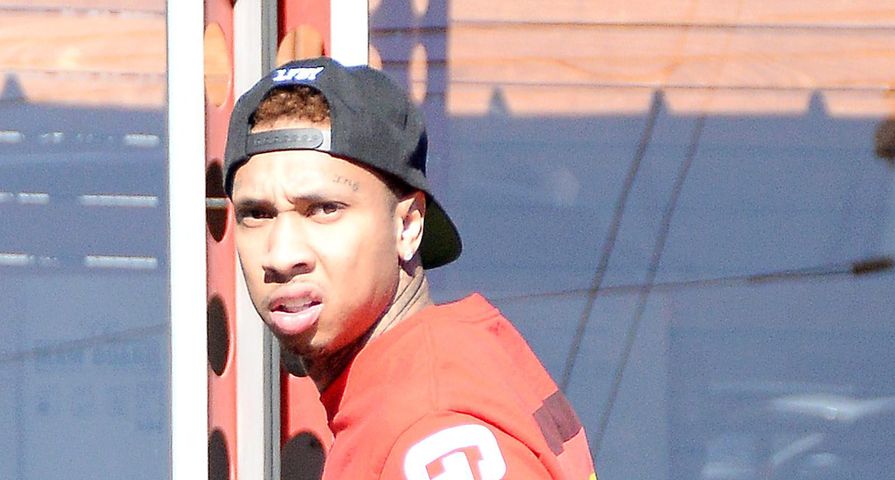 Who Is The Most Loved (And Hated) Kardashian Clan Member?

Tyga is pretty unremarkable. The most interesting thing about him is who he is dating – Kylie Jenner. Besides that, no one really cares. He may think that he is a force to be reckoned within the rap community, but if it weren’t for his collaborations with Chris Brown and Lil Wayne, we think he would have disappeared a while ago. After dong some research, we’ve come to realize that Tyga is actually a really sketchy guy. He’s been sued so many times for all kinds of shady things that we are beginning to think he might have a future in crime, if the whole rap thing doesn’t work out. Without further delay, here are Tyga’s 8 most shocking scandals!

8. Being Sued over a Clothing Line

Tyga’s former business partner Chuon Guen Lee is suing him for stealing her clothing line concept. They previously worked together on a brand called Last Kings in January 2013. According to Lee, he promised to promote the new brand and get it on the shelves at Tilly’s, but instead he made off with a half a million dollars worth of the merchandise and then launched a very similar brand called Egypt Kings. Lee is suing Tyga for $1.6 million plus damages.

Kim Kardashian Style: Vote on Her Best and Worst Looks!

When the lawsuit was filed, Tyga tried to downplay the story. “Shout out to my Jeweler @emitthejeweler !!!!! I don’t f*k with #b*tchn*ggas @jasonofbh,” he tweeted, alongside several gold pieces of jewelry.

Three women who appeared in Tyga’s music video for his song “Make It Nasty” each sued him for breach of contract, invasion of privacy, as well as fraud. Alissa Rae Ross, Azia Davis, and Elizabeth Velasquez accused him of showing their nipples in the video without their consent. They were reportedly assured that their breasts would be edited out and that the unedited version would not be released; however, the unedited version was released via Tyga’s Twitter account. While it is unknown whether Rae is still suing, Velasquez and Davis are both reportedly seeking $10 million in damages.

7 Families More Screwed Up Than The Kardashians

5. Was Sued for Sexual Assault

Another woman from Tyga’s music video for “Make It Nasty” sued him for sexual battery, fraud, invasion of privacy and infliction of emotional distress. Allison Brown alleged that while on the set of the video, a man in a rabbit suit groped her and another man grabbed her breasts. Like the other women who sued him, she also claimed that she was persuaded to dance topless and assured that her breasts would be edited out. According to court documents, Tyga offered Brown $50,000 to drop all of the claims against him; however, she claims that she only received $25,000.

4. Not So Secretly Dating Underage Kylie

According to Amber Rose, Tyga left his fiancé Blac Chyna to be with Kylie Jenner, who was only 16 years old at the time. He was 25. Under California law, that is statutory rape and at least a misdemeanor. Tyga did initially deny that he was dating the young reality TV star, but eventually he he just came out with it on Instagram by posting a photo of Kylie with the caption, “Certain things catch your eye, but only few capture the heart.”

While they avoided any public displays of affection for months, once Kylie turned 18, she and Tyga started piling on the PDA.

This past July, a nude photo was leaked of Tyga. It was reportedly sent to a transgender model Mia Isabella, who claimed that she had been in a relationship of sorts with the rapper for three years, which means he was cheating on Blac Chyna and is cheating on Kylie Jenner. The pictures were framed within a text messages that are believed to have been between the rapper and Isabella.

While Tyga’s lawyer, Lee Hutton, admitted that the photos were authentic, he denied that his client sent them to Isabella and insisted that the images must have been hacked. Hutton also claimed that he called the FBI to help sort out the matter.

2. Being Sued for “Club Hopping”

This past August, Tyga was sued by a concert for club hopping in Las Vegas. The rapper had signed a contract with Z Entertainment to perform at Body English for $25,000, but one of the stipulations was that he couldn’t perform a week before his scheduled performance or a month after in Vegas. The day before his gig with Body English, Tyga was reportedly caught performing at another venue. Z Entertainment also accused the rapper of failing to show up for a concert in Santa Monica in November 2014.

1. Being Sued by His Landlord

Tyga must be in dire financial straits. He’s been sued multiple times for failure to pay rent. Just a few days ago, his landlord successfully sued him for falling two months behind on rent. He was ordered to pay $70,00 in back rent and vacate the premises ASAP.

Tyga, in turn, is suing his landlord for breach of contract. According to the rapper, he gave his landlord $200,000 as a down payment on the home back in September 2014, but the landlord hasn’t fulfilled his end of the bargain by making sure the home is officially purchased.