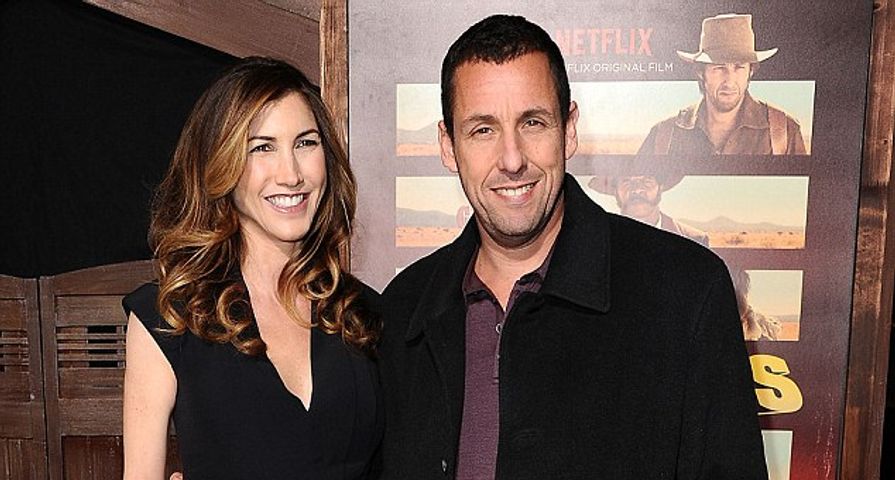 Adam Sandler and Jackie Titone are celebrating 14 years of marriage today which is a huge feat in Hollywood! The funny-guy actor and former model/actress wed back in 2003 in a private ceremony in Malibu, California. Adam and Jackie are often spotted out and about holding hands and looking extremely happy together which excites fans about their relationship! In honor of their anniversary, here’s a look at 7 things you might not have known about their relationship:

7. They Have Two Daughters

The couple welcomed their first daughter, Sadie Madison Sandler, 9, on May 6, 2006 and on November 2, 2008, they welcomed another daughter, Sunny Madeline Sandler, who is now 7. Both children were born at Cedars-Sinai Medical Center in Los Angeles where the family still resides, but they also have homes in New York City and Florida.

6. Met on The Set of Big Daddy

This happy Hollywood couple met while filming one of Adam’s hugely popular comedic films, Big Daddy. At the time, the beautiful actress, Jackie Titone was still trying to build up her career from scratch. She was cast in Big Daddy as a waitress who takes Adam’s order of a root beer while in a sports bar. They started dating shortly after the movie was released. Her relationship with the A-list actor definitely helped kickstart her career because he now regularly casts her in his films, or will request her to appear alongside him, but she continues to only take on small roles. You can find her in films like Little Nicky, Hotel Transylvania, That’s My Boy, 50 First Dates, Just Go With It, Grown Ups and Grown Ups 2.

Adam and Jackie dated for a long time before they got engaged, but he finally proposed at the age of 35. In an interview with Diane Sawyer he explained how he mentally prepared for the romantic gesture: “I played basketball that afternoon, trying to calm down, and then I was driving, I was saying stuff out loud and trying to, you know, make sure I hit all of the right things so she would remember nice stuff, and I did all right. She called her grandmother right after, and her mother, and they all said, yeah, I heard the applause over the phone and stuff.”

When they got married on June 22, 2003 in a lavish traditional Jewish wedding in Malibu and everyone important to them was involved, even Adam’s dog! His bulldog, Meatball, was Adam’s best ‘man’ and they even dressed him up in a doggy tuxedo with a white yarmulke to match.

Despite Adam’s movie star status, he’s a very hands-on dad for their two daughters. Adam is constantly caught gushing about his children in interviews and he’s rarely spotted out away from his family for long periods of time. In an interview, Adam divulged that one of his favorite things about being a dad is story time! He said, “I often slip into costume as the lead character in whatever bedtime story I am reading. This is a little weird because my daughters love Disney princesses. But you would be surprised at how good I look in a ball gown.” Adam is known for his goofy behavior, so we aren’t surprised this funny actor likes to put on a show for his kids!

In every single marriage there needs to be a strong sense of trust and respect, but even more so when it comes to Hollywood couples. Best friends Adam Sandler and Drew Barrymore are no strangers to working together on a film set — the two first met while working on The Wedding Singer back in 1998; they collaborated again for 50 First Dates in 2004 and, most recently, for the 2014 romantic comedy, Blended. Drew and Adam have continually acted as love interests for one another in their film projects, which could be awkward for Jackie, but nope! During an interview on Ellen, Adam revealed that it was his wife who was pushing him to be more passionate during a romantic scene with Drew. “It’s like the best thing that my wife loves Drew so much that she like encourages me. There’s no jealousy at all. She’s just like get in there!” he said. He then recounted a specific story from shooting a scene in Africa. “We’re doing a nice romantic scene and I think I’m doing pretty great being as romantic as I can be and then like – OK, moving on, let’s go, that was great Drew. Good job. And I’m walking away and I just see my wife like (shaking her head), ‘what’s the matter? Just please, for the sake of women, get in there and just look a little more alive,” he said.

1. She Converted to Judaism

Adam Sandler comes from a Jewish faith and is very open and supportive of his religion. In the past he dated women who were Jewish and non-Jewish, but after several years of dating, we knew their relationship was serious when she converted to Judaism in 2000, three years before they wed.