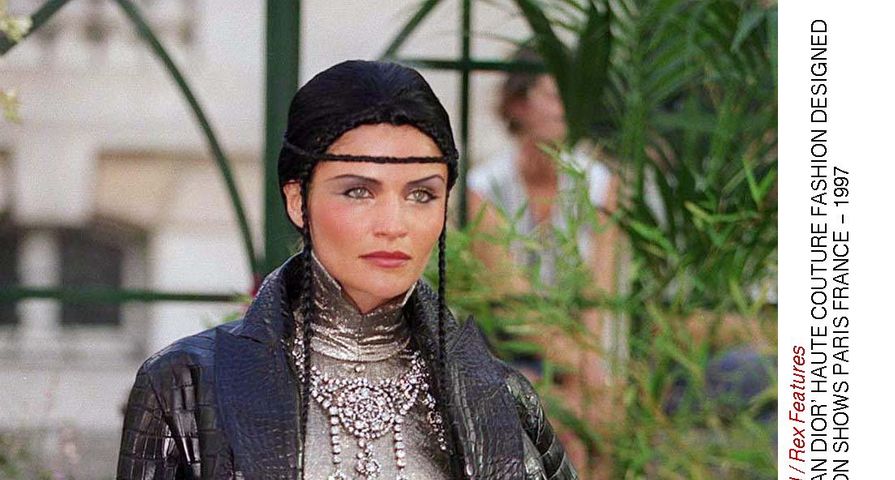 Before the advent of the supermodel, models were just nameless faces that walked down runways and appeared on magazine covers and calendars. However, that changed during the ‘80s and ‘90s. Many of the big supermodels of this era became celebrities in their own right and their fame rivaled that of movie stars and rock musicians. Many of these supermodels are still around and, while some of them look exactly the same, some of them definitely don’t!

This German model became a household name during the ‘90s when she starred in a global campaign for Guess jeans. She then became the face of Chanel and appeared on the cover of more than 500 magazines and appeared on the catwalk for numerous fashion designers including Versace, Karl Lagerfeld, Chloe, Yves Saint Laurent, Christian Dior, Fendi, Michael Kors, Dolce & Gabbana, Ralph Lauren, Balmain, Louis Vuitton, Chanel and Valentino. Schiffer continues to work; however, she’s at a point in her career now where she can afford to be choosy and, when it comes to preserving her looks, she’s also very selective. According to her, she hasn’t gotten any plastic surgery and would never considering using Botox because no one knows the long-term effects.

This Canadian born supermodel has graced the cover of over 700 magazines and is famous for saying that she doesn’t get out of bed for less than $10,000 a day. Although she briefly retired from the catwalk in 1998 after a very successful career, she made a comeback in 2001, and now works sporadically. Evangelista has admitted to using Botox and she’s also said that she isn’t opposed to other forms of cosmetic surgery.

Helena Christensen was one of the leading models in the ‘90s because she fronted fashion campaigns for Prada, Versace, Lanvin, and Hermès; was one of the original Vicotria’s Secret models; and graced the covers of Vogue, Elle, and Harper’s Bazaar regularly. The Danish beauty continues to model, but now she also does photography. Some of her work has appeared in Nylon, Marie Claire and Elle. At 49, she looks her age, but in the best way possible. She says that she hasn’t had any work done, but she hasn’t ruled it out for the future.

Naomi Campbell hasn’t changed at all since she first rose to fame for walking the runway for renowned designers like Gianni Versace, Azzedine Alaïa, and Isaac Mizrah. As the first black model to appear on the cover of British Vogue, she was easily one of the most recognizable faces of the ‘80s and ‘90s. To this day, she still continues to model. In 2014, she was on the cover of Vogue Australia, Vogue Japan, and Vogue Turkey, as well as the Vietnamese, Singaporean and the 35th-anniversary Latin American edition of Harper’s Bazaar.

During the ‘80s and ‘90s, Cindy Crawford was one of the most influential models. With her all-American good looks, athletic build and trademark mole, she stood out amongst the super thin models of the ‘90s. During her heyday, she went beyond just modeling. She signed multi-million dollar deal to promote Pepsi and Revlon. She quit modeling full time in 2000 and became more of a businesswoman. She created a line of beauty products with Jean-Louis Sebagh called Meaningful Beauty for Guthy-Renke and launched a new line of furniture under the “Cindy Crawford Home Collection” name. She also has a furniture line with Raymour & Flanigan and launched a home goods line with J. C. Penney. She’s still looking good, but she does get some help. She has admitted to getting Botox and vitamin injections and saw a plastic surgeon for the first time when she was only 28!

Christy Turlington rose to fame after she appeared in Peter Lindbergh’s Vogue cover alongside Naomi Campbell, Cindy Crawford, Linda Evangelista and Tatjana Patitz. She was such an integral part of the modeling world during the ‘90s that she along with Campbell and Evangelista were referred to as The Trinity. Nowadays, she doesn’t spend much time modeling. Instead, she has become an entrepreneur and activist. She has an Ayurveda skincare line with Sundari and an active women’s clothing line for Puma. She is also an Advocate for Maternal Health for the international humanitarian organization CARE and is an Ambassador for Product Red. She even directed a documentary, No Woman, No Cry, that explores maternal health around the world. The former supermodel still looks ridiculously good. She hasn’t had Botox and is determined to age naturally.

The waifish model was catapulted to fame when she was featured in Calvin Klein’s Obsession ad campaign in 1993. She has since appeared on over 300 magazine covers and has been featured in ad campaigns for Chanel, Balenciaga, Burberry, Versace, Alexander Wang, Givenchy, Roberto Cavalli, Yves Saint Laurent, Dior, Gucci, Dolce & Gabbana, Calvin Klein, Alexander McQueen and Bulgari. Moss isn’t modeling as much as she used to, but she’s still considered one of the highest paid models in the world thanks to her campaigns for Rimmel, St. Tropez tan and Kerastase haircare. While she no longer has her waifish figure anymore, she still looks pretty darn good.