Home » Entertainment » Movies » 7 Greatest Movies With Seven In The Title 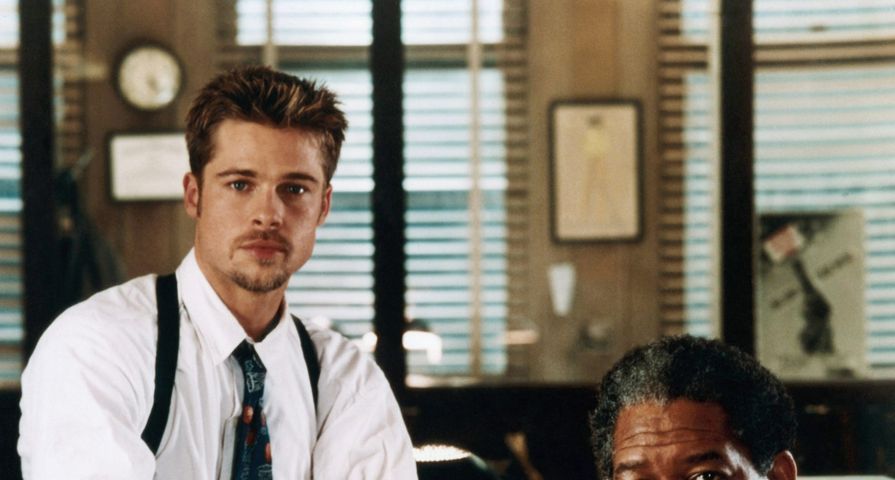 What is it about the number 7? Or the word, seven, representative of that number that carries with it a great mythical power? Movies with a “7” or “Seven” in the title seem to own a magical edge over the competition, and there are many. So many, we can’t fit them all on a list that you’re likely reading while you’re supposed to be working. So, for sake of brevity, and paring a list down to the best of the best, here are the seven best movies with seven in the title, and two honorable mentions to Seven Pounds and the classic, The Seven Year Itch.

There has to be a musical on this list, and regarding the number seven, it doesn’t get any better than doubling it up with Seven Brides For Seven Brothers. This musical is marked with a hoe-down of a good time, and some of the best, most athletic dancing of the golden era of cinema. It was directed by Stanley Donen, the very same man who brought the world Singin’ In The Rain, and Seven Brides holds up so well, that the stage version is still a popular romp in summer stock theatre throughout the United States. The story features a fella from the backwoods who brings home a wife to the farm, and his six brothers decide they need wives, too. Obviously not set after the 1960s, rather in the 1850s Oregon, it has some catchy tunes, and as mentioned, some raucous dance numbers.

How good is The Magnificent Seven? So good it was remade in the 1990s, and MGM/SONY is remaking it again to star Chris Pratt. A modern telling of Akira Kurosawa’s masterpiece, Seven Samurai (coming later in the list), The Magnificent Seven was made in 1960, and starred Yul Brenner and Steve McQueen as American gunmen hired to protect a Mexican village from some nasty bandits. Yes, that sounds very similar to The Three Amigos, but imagine seven gunmen, and no real comedy, rather legit, 1960s Hollywood Western violence. The film holds up, and it’s somewhat a shame that another studio feels the need to remake another classic, but at least they got the casting right. Now everyone can know why Denzel Washington has that ridiculous handlebar mustache.

5. Snow White and The Seven Dwarfs

“Hi-Ho! Hi-Ho! It’s off to work we go!” Try singing that some morning with your co-workers… it’ll be a better day at the office. There is something quite special about the Disney versions of classic fairy tales. Walt Disney had a knack for scoring some of the most talented people in the world to work his features, and consistently break new ground. Snow White and The Seven Dwarfs holds up beautifully to this day. The music, the animation, the dialog: it’s full of wonderful sentiment and it perfectly captures the era of animated filmmaking at its best. Here’s the crazy thing about the actors in this film: they were all uncredited when the film was released. They were nothing more than the pool of talented, contract players owned by Disney Studios at the time. Legends who got no credit. Remarkable.

4. Seven Days in May

Here’s a “seven” offering that fewer have seen. Seven Days In May was directed by John Frankenheimer, and released in 1964. It featured Burt Lancaster and Kirk Douglas in a thrilling foray into the corruption and distrust within American politics. How’s that for a pitch? Is the film good? It’s sitting at 100 percent on Rotten Tomatoes, and hovering near 7.9 at IMDb… yeah, it’s good. The dialog is wonderfully cheesy at times, but the conspiracies, and betrayal of government at the highest level is always an intriguing watch. In the seven days featured in this film, one hero (Douglas) is attempting to thwart the dark forces who would attempt a coup d’etat against the seated POTUS, and the Federal government. Does he fail? Does he succeed? Was it all blown out of proportion? The answers lie in these Seven Days in May.

Of all the creepy films about creepy killers, Seven may be the creepiest. Silence Of The Lambs is an incredible film, and offered an incredible kick off to the decade known as the 1990s, but on the creepy scale, it struggles to compare to a film that came only six years later. Seven solidified David Fincher as a master of the slow burn. He is able to tell stories that offer the audience a little something of intrigue every five minutes, and keeps that audience hoping for more… and more… and more (with the eyes half-covered)… until (***spoiler alert***) Gwyneth’s head ends up in a box. The title is, of course, a play on the Seven Deadly Sins of reference in Dante’s Inferno from the Divine Comedy. For those who haven’t seen it, sorry about the spoiler, but it’s still worth a watch. It’s terrifying.

The Seventh Seal sounds sinister, doesn’t it? Like something you would never want to open? Here’s the premise: A European knight who has returned home from battle — in the Crusades — to a country that is being torn apart by Black Death. For those unfamiliar, it was one of the greatest pandemics in world history, leveling the lives of millions across Europe in the 14th century. The knight is visited by none other than death itself, in form of the Grim Reaper, wouldn’t ya know. He’s told that his time has come. This knight is savvy, and offers a little bargain with the personified Black Death: they should play a game of chess for the life in his body. For those who love cinema, and all things about its history, this film represents Ingmar Bergman at his absolute best. The 1957 feature is classic!

There was no doubting the top spot. There’s no greater film with seven in the title than Seven Samurai. It’s also worth mentioning: Seven Samurai makes the Top 7 of several film lists regarding the best of all time. It is considered the masterpiece of Japanese master filmmaker, Akira Kurosawa, and the story remains timeless. A struggling, and aging samurai warrior is contacted by villagers who have become an easy target for bandits. The samurai answers the call by recruiting six other samurai warriors to join him in the village. They teach the villagers how to defend themselves, and also grow to become part of the community. The film was first released in 1956, and it is a true epic in the definitive sense. For those who haven’t seen it, yes, the seven samurai take on a group of 40-plus bandits as the film’s climax.