6 Young And The Restless Spoilers For The Week (September 26) 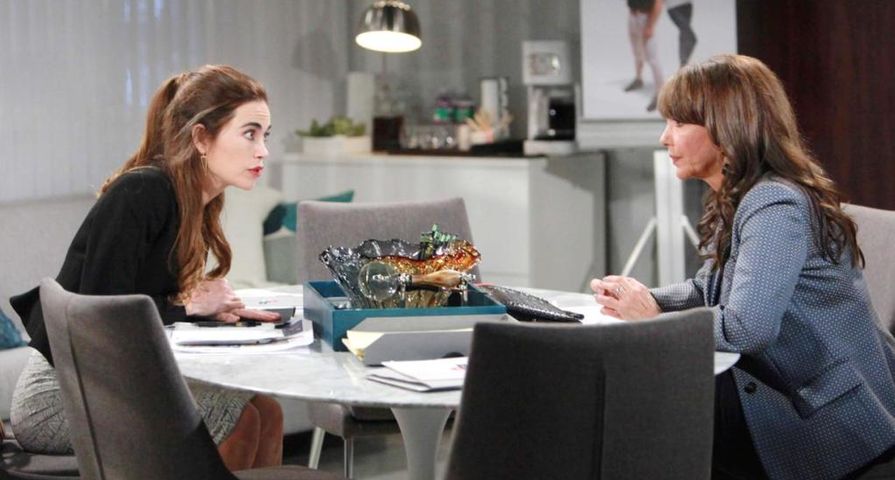 Calling all Young and the Restless (Y&R) fans! Another drama-filled week is about to explode in Genoa City! Jack continues to steam over his wife and brother’s affair, Travis meets more Genoa City residents, and Sharon plays matchmaker. Learn more about Jack, Phyllis, Billy, Nick, Travis, and Vicky in the below Y&R spoilers for the week of September 26th.

The good news is Phyllis assures the police (moreover Paul) that Jack didn’t purposely hurt her last week when she fell from the Abbott staircase. Bad news? A reporter for the GC Buzz writes a story stating that Jack beat up Phyllis, which sends Jack reeling. Meanwhile Phyllis rejects Billy this week, letting him know it is Jack she wants so Billy backs off. John Abbott makes a ghostly appearance and in typical fashion offers some insight. He reminds Jack of his own past and tells him not to be so harsh on Billy and Phyllis. Billy tries to talk to Jack about Phyllis and so does Summer, but Jack remains firm on his stance.

So as Jack is being torn apart in the media, friend Devon tries to make things better by bribing the Buzz reporter out of writing the story, but he just makes matters worse and creates more headlines. Devon wants to sue the media outlet, but Michael advises strongly against this. Then Devon comes up with a brilliant alternative. He simply decides to buy the GC Buzz as a gift for his wife. How will Hilary fair in her new media role? Spoilers indicate that things don’t go so well for Devon’s wife from the get go. Fans of ‘90s sitcom Married With Children need to keep an eye out for David Faustino (former Bud), as he plays a guest role this week as producer of the Buzz, Howard Green.

In other news, Vicky finds a new supporter this week. She also has a blow out with Jill. She informs her that she knows about the job offer she tried to bribe Travis with. She also tells her ex-mother-in-law to back off and that (once and for all) she is done with Billy Abbott. Will Jill finally step away from her plans of trying to get these two to reunite?

Travis gets warm and cozy in Vicky’s house this week and has a run in with Victor. They have a nice conversation and Travis informs Victor of how Jill tried to bribe him out of town. Vicky tells her father to back off of Travis, but Victor assures her that he is fine with her new love … anyone is better than Billy after all. While Victor laughs the situation off in front of Victoria, he does get a little inspired by Jill’s scheme. He wants to shake things up at Newman: will he offer Travis a job in hopes of luring Vicky back to the family company and away from Jabot?

Is it too soon for Nick or Chelsea to think about dating? Sharon doesn’t seem to think so. She uses her daughter’s birthday party as a reason to connect these two and it doesn’t take long for Chloe to see what is going on. She immediately informs Chelsea of this. Speaking of Faith’s birthday party, Chloe is there as Kevin’s “plus-one” and immediately starts playing mind games with Mariah. Mariah has enough and there is a bit of a confrontation between the two ladies. When forced to choose, Kevin sides with Team Chloe all the way.

Things get interesting when Ashley and Travis find themselves alone in a stopped elevator. Cane has a hard week. Abby starts to get down about her marriage again. Ashley decides to meddle in someone’s life this week; who will the victim be, Abby or Vicky? Nikki stresses over the idea that Victor and Jack may start up their old rivalry again. Sharon gets a message that shakes her up … it could about Sully?