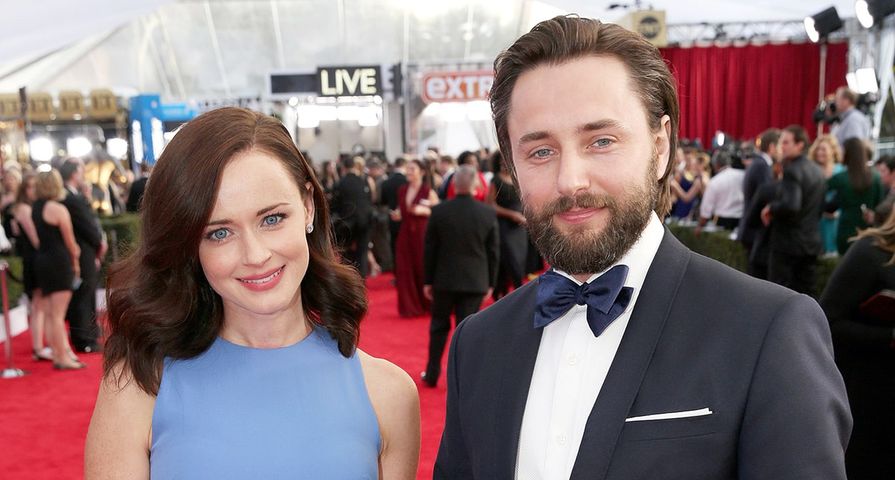 Alexis Bledel and Vincent Kartheiser are one of the most fiercely private celebrity couples in Hollywood. These two have managed to keep all aspects for their relationship under wraps for the past five years, including their wedding and the birth of their son! In celebration of their upcoming third wedding anniversary, here’s a look at 6 things you might not have known about this elusive couple!

The Gilmore Girls actress met her husband on the set of Mad Men in 2012. She had a guest starring role on the show which lasted over three episodes in season 5. She played the character of Beth Dawes, the mistress of Pete Campbell, played by Vincent Kartheiser. They didn’t start dating until after season five wrapped up. “We were completely professional. We never saw each other out. We never — it was nothing, it was just work,” said Kartheiser in an interview with Vulture.

Even if Kartheiser didn’t know it at first, Mad Men creator Matthew Weiner said he could tell they would get married from their very first meeting. “I told Vinnie that they would be great together. I was like, ‘Don’t blow it!’ Honestly, they’re a really good match. They’re both very down to earth, with a sense of responsibility and strong family ties. And they’ve been acting since before they can remember, which makes for a very special personality. It’s not just that I thought they would look cute together. Even with all of Alexis’ amazing qualities, I think that if she had not been such a good actress, he would not have been interested,” said Weiner in an interview with New York Magazine.

AKM-GSI
Things You Might Not Know About Harry Connick Jr. And Jill Goodacre's Relationship

Bledel and Kartheiser are known for being fiercely private with their relationship, so it was a pretty big deal when the two finally emerged together in public. Their red carpet debut was at the Macallan and Annie Leibovitz Photo Launch in New York City back in October 2012. Their relationship had been officially revealed a few months prior by Us Weekly in June 2012.

The key to a successful relationship is good communication and, of course spending time together. Kartheiser said in an interview with Us Weekly that he and Bledel never go longer than 10 days apart. “I’m a really lucky guy. The most important thing, for us, is to make sure that we see each other in the flesh at least once every 10 days. All the other stuff is good, like FaceTime and the texting…I love seeing her. You gotta make the flight!” he said.

Although Bledel happily sported her engagement ring on the red carpet at the premiere of her Hallmark movie Remembering Sunday, they were super secretive about the wedding. “I’m a very lucky man. I keep saying ‘girlfriend.’ And then I’m like, ‘I mean, my fiancee!” said Kartheiser to Us Weekly. They got engaged in March 2013 and tied the knot in the summer of 2014 in a top secret ceremony in Ojai, California.

Many people were shocked to find out in May 2016 that Bledel and Kartheiser had become parents almost a year prior! After her Gilmore Girls co-star Scott Patterson accidentally revealed Bledel was a mother during an interview with Glamour, her rep confirmed the two welcomed a son in fall 2015. Not only did they manage to keep her pregnancy under wraps for the entire nine months, but they also managed to keep the birth and the fact that they were new parents a secret until months later! Bledel was most definitely pregnant when she appeared at the ATX Television Festival in Austin, Texas in June 2015, but still no one knew.