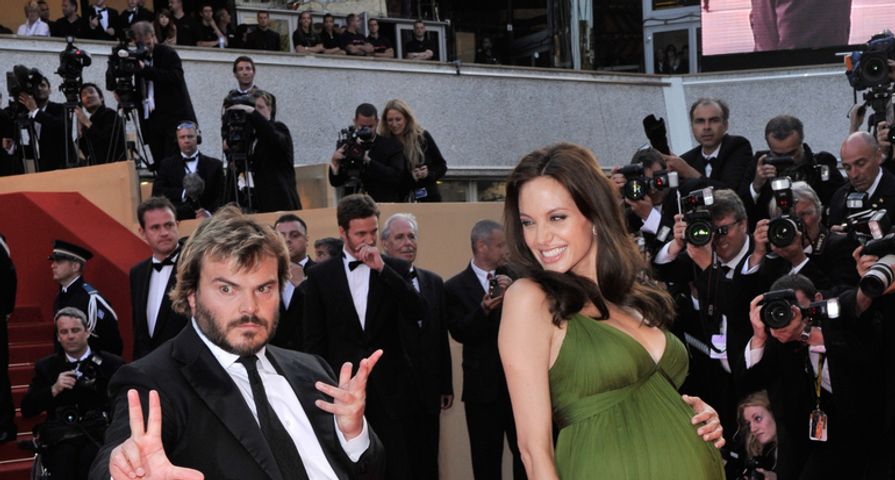 Celebs are always tight-lipped about what’s going on in their personal lives — but sometimes they slip up and reveal dirt on each other! Here are six different celebrities who accidentally revealed each other’s secrets! We’re guessing they all got firm lessons from their publicists afterwards…

In the fall of 2014, when Britney Spears appeared on Entertainment Tonight, she dropped some juicy info about her Crossroads star Zoe Saldana: Zoe was pregnant with twins. When asked if they’d ever act in another movie together, Brit responded, “Who knows? That’s a very good idea. But she’s pregnant with twins right now so I’m sure she’s got a huge future ahead of her.” This was big news because Zoe was very tight-lipped about her pregnancy, even after she had an obvious baby bump. Luckily, Zoe and Brit are on good terms: Zoe said, “I have a huge amount of respect for Britney Spears and I’ve always said this, and will always continue to say it, she was the one big, big celebrity that I met when I was starting to work in Hollywood who literally was humble.”

Celebrity baby news is simply too hard to contain! Similar to Britney, back in 2011, Destiny’s Child singer Kelly Rowland accidentally told Us Weekly the gender of Beyonce’s baby. In an interview at the Cosmopolitan Awards in London, Kelly was asked what she might get Beyonce for a baby shower gift. She repsonded, “I don’t know. I think her dad [Jay-Z] is gonna give her everything anyways, all I can give her is love.” She continued, “I think she’ll be very well behaved. Her parents will make sure of that.” The use of “her” and “she” made it crystal clear that Beyonce was having a girl! Celebs, take note: these questions are tricks! As soon as you use a gender-specific pronoun, it’s all over.

Like Britney, Jack Black was also very excited that his celebrity friend was having twins. During a 2008 interview on The Today Show, the Kung Fu Panda star dropped the bombshell that his co-star Angelina Jolie was expecting twins with her now-husband Brad Pitt. “You’re gonna have as many as The Brady Bunch when you have [twins].” Luckily, Angelina wasn’t upset that Jack spilled the beans; in fact, she later said that she was “actually relieved” that someone broke the news for her so she didn’t have to. At least it was a happy secret to reveal — and Angelina doesn’t seem like the kind of person who would freak out about something like that.

Engagement news is also very hard to keep secret! Earlier this year, T-Pain spilled the beans to Vulture that Robert Pattinson was engaged to FKA Twigs. “[FKA Twigs is] engaged now, so that’s about to be a whole other thing,” T-Pain said. “Yeah, to ol’ Patty [Robert Pattinson]. I don’t know if she wanted anybody to know that.” Well, because millions of Twi-hards are obsessed with Rob, that’s not something that people are just going to ignore. The response was so big that at first, T-Pain tried to say it was all an April Fool’s joke — but Pandora’s Box was already open, and fans knew better. “I am still and always will be sorry,” he later wrote on Twitter. At least Rob and FKA are happy together? Would you be mad if someone spilled your engagement news? Ideally, it’s something that you only get to announce once in your life.

Andy Cohen of Bravo’s Watch What Happens Live is always getting celebrities to spill juicy secrets — and his magic worked on Tiffany, who revealed something rather personal about a fellow 80s/90s pop star. When asked if she ever had a romantic relationship with a member of New Kids on the Block, she said of Jonathan Knight: “The quiet one. The shy one. He became gay later.” But it’s never appropriate to out someone else, and people also took offense at the idea that someone could “become” gay. Tiffany later apologized publicly on Twitter: “Really didn’t know that was the wrong thing to say. Never meant to hurt Jon.”

Another accidental outing happened in an interview with BlackFilm.com, when Empire actor Malik Yoba talked about his co-star Jussie Smolett. “Like I know Jussie, he is gay, and he’s very committed to issues around the LGBT community,” Malik said. “He and I have a very close relationship.” Later, Malik tried to backtrack, saying that he was talking about Jussie’s character on the show and not the actor himself. But two weeks later, Jussie formally announced that he was gay on Ellen Degeneres’ daytime talk show. “There is without a doubt, no closet that I’ve ever been in,” he said. “And I just wanted to make that clear, but it was most important for me to make that clear to you on your show at this time in the world.” Way to turn a spilled secret into something positive and inspiring!