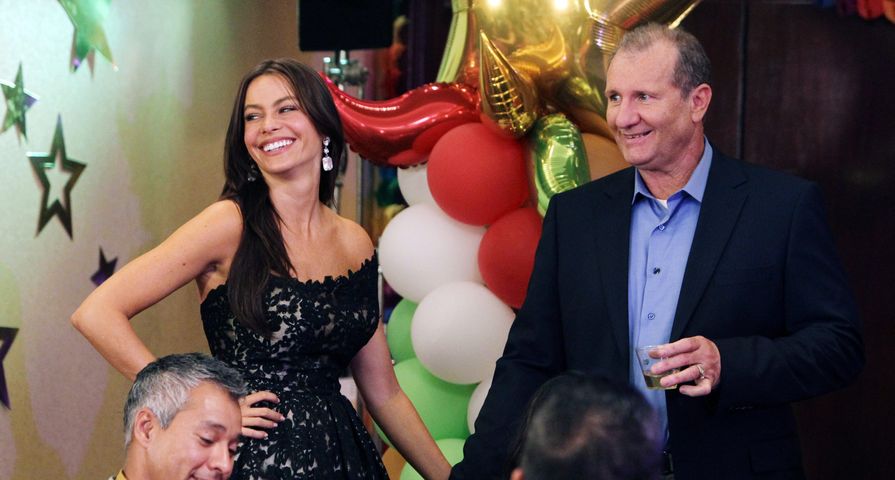 Age ain’t nuthin’ but a number. Unless those numbers are really far apart and represent the ages of two people in a relationship, then they tend to raise some eyebrows. That’s the reason some shows decide to use whopping age-gaps to create titillating (or silly) storylines. Whether they make you swoon or make you squirm, here are 10 TV couples with crazy age gaps.

10. Carrie and Aleksandr Petrovsky on Sex and the City

When Carrie Bradshaw wasn’t trying to find happily-ever-after with Mr. Big or Aiden, she was experiencing a new sort of relationship and being exposed to a wider world when she dated Aleksandr Petrovsky. A rich, successful, established artist, “The Russian” was in his fifties when the two began dating. Carrie was 38, which made Aleksandr around two full decades older than the beloved relationship writer. But their age difference was just one of the issues they had and minor in comparison to his self-involved and hugely disrespectful behaviour. Sometimes a jerk is just a jerk, no matter how old they are.

9. Frank and Alice on Friends

Phoebe was beyond happy to find out she had a little brother that she hadn’t known about. She wasn’t so happy, however, to find out that her newly discovered little brother was dating his former home economics teacher. Alice and Frank eventually won over Phoebe – not to mention asked her to be their surrogate and ended up being the parents to triplets – but that didn’t mean that it didn’t make audiences squirm when the pair would start making out on Central Perk’s couch.

8. Gabrielle and John on Desperate Housewives

The middle-aged suburban cougar growling over the hot young gardener may be a cliché, but Desperate Housewives decided to play with it in full force when they established their penchant for torrid, taboo, and trouble-making affairs right from the start in season one. When young John began to tend Gabrielle’s lawn, the two ended up doing more than just mowing the grass. The relationship that raised audiences’ eyebrows did the same on Wisteria Lane and was squelched when John’s mom learned about the shenanigans.

Not to be outdone, The O.C. jumped into the age-differing illicit affair game when Julie Cooper decided to hook-up with her daughter Marissa’s ex-boyfriend Luke. Yup, you read that right. Her…daughter’s…ex…boyfriend. Ick. Ick. Ick. For some odd reason (heavy sarcasm), the relationship didn’t work out in the end, which may have had something to do with Marissa finding out about what the two were up to.

6. Alan and Kandi on Two and a Half Men

Two and a Half Men had its share of age-differing relationships, but they were usually the domain of Charlie Sheen’s character Charlie Harper. This is how 22-year-old Kandi made her way onto the show, as a former fling of the main character. But when Charlie blows her off and moves on to his next lady friend, she shows up peeved and looking to confront him. Instead of finding Charlie, she meets Alan and the two begin dating and Kandi eventually becomes Alan’s second wife, despite their age gap…and despite the fact that she used to sleep with his brother. Eeeeew!

5. Dan and Rachel on One Tree Hill

One Tree Hill decided they needed their own creepy-parent-dating-their-kid’s-friend storyline and of course chose love-to-hate Dan and Rachel to fill this gap. In season seven, the pair – he being one of the show’s parents and she being one of the kid’s former high school friends – announced that they were married and, although the marriage didn’t last, it was just enough to creep fans out good and plenty.

4. Puck and Shelby on Glee

Glee decided to make the teen/older character relationship gimmick a practical trend when they wrote their own storyline involving Puck and Shelby. But they upped the ante with the pair’s involvement. He was a high school kid and she was the older woman who had adopted the baby girl he fathered with Quinn. The relationship may have been good for ratings, but it wasn’t such a gleeful experience for fans.

3. Pacey and Tamara Jacobs (His Teacher) on Dawson’s Creek

Before Puck and Shelby on Glee, before Dan and Rachel on One Tree Hill, before Julie and Luke on The O.C., there was Pacey and Ms. Jacobs. Dawson’s Creek started their show off with a bang when young teen Pacey fell for and eventually hooked-up with his much-older English teacher Tamara Jacobs. The relationship caused rumors and trouble on the show as well as fierce squirming from audiences.

2. Monica and Richard on Friends

Another early-adopter of the May-December relationships was Friends and it became one of their most enduring storylines, popping up throughout the years. When Monica began dating Richard, the pair hit it off immediately. The catch? He was her dad’s best friend; she was friends with his daughter in high-school; and even later dated his son. He had watched her grow up from a child and now they were sleeping together. It was…weird…and gross when you think about it like that. For real. The age difference continued to create friction between them and their lifestyles and eventually ended when Monica decided she wanted to have children and the older Richard, who already had adult children of his own and grandchildren even, didn’t want to have any more kids.

1. Jay and Gloria on Modern Family

One of the most popular TV couples that face a significant age difference is hands-down Jay and Gloria on Modern Family. But where other fictional pairs with age gaps come across as creepy, these two are just plain endearing. Their differences – more than just their age, but also their roots, their backgrounds, their personalities, and so much more – are used for comedic fun and silly set-ups, which have made them one of TVs most fun pairs to watch.