Home » Trending News » We Weigh In: Should Crossovers Become More Frequent On Y&R And B&B?

We Weigh In: Should Crossovers Become More Frequent On Y&R And B&B? 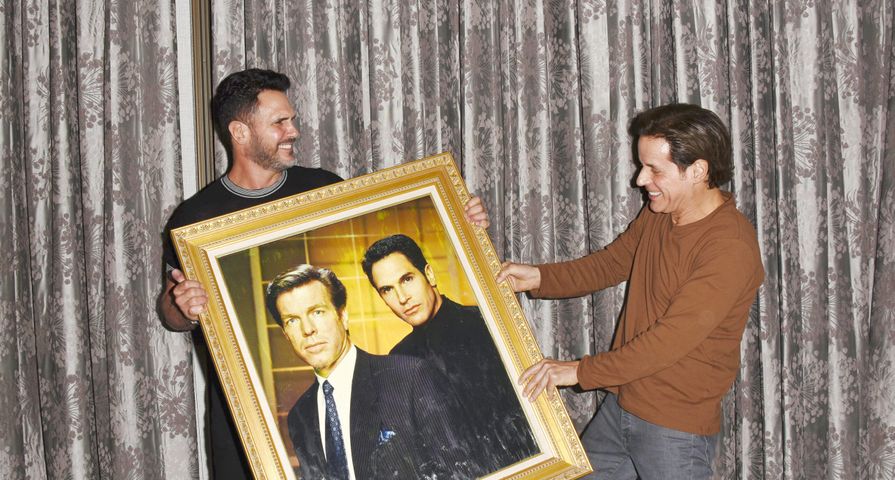 It was announced yesterday that John McCook, who portrays Eric Forrester on The Bold and the Beautiful, is set to enter The Young and the Restless canvas this month in a string of cameo scenes. The patriarch of the Forrester family will orbit the very fringe of Genoa City’s social order, as Y&R newcomer Sally Spectra (former B&B cast-mate Courtney Hope) will visit him in Los Angeles.

In spite of the fact that these scenes sound pretty humble in nature — with one set on the patio of Forrester Creations, and the others relegated to somewhat stilted video chats — the news has caused a lot of excitement across the B&B and Y&R fan bases. It has also piqued the curiosity of the greater soaps community.

So if this John McCook cameo is some kind of beta test from creators William J. Bell and Lee Phillip Bell, and we are the targeted users, then the results are in: soaps audiences want more crossovers!

This is hardly the first time the Bell brothers (who created both Y&R and B&B in 1973 and 1987, respectively) have permitted characters from one canvas to explore another. In fact, since 1990, star performers from each CBS program have made “the long flight” to the other side of sudser-land to get embroiled in rich storylines. And by long flight, I mean they’ve walked by the 10 or so stages that separate one show from the other. (They both shoot at CBS Television City in Hollywood.)

From the days in which Sheila Carter and Lauren Fenmore waged war against one another (first in Genoa City and again in Los Angeles), to Deacon Sharpe’s infiltration of Victor and Nikki Newman’s marriage, crossover events are the quickest way for soaps writers to attract attention to a storyline. Given the logistical headaches involved in combining two different entities, it’s also a giveaway to fans concerning which storyline will warrant the most screen-time.

Want Y&R plotline predictions? Check out Young and the Restless Plotline Predictions For the Next Two Weeks (June 7 – 18, 2021)

Obviously this phenomenon extends well beyond the CBS daytime universe (All My Children and One Life To Live had some real doozies, if you recall). But Y&R and B&B, as sister soaps, should be able to conduct these crossovers with far less red tape than the relatively closed ecosystems of NBC’s Days of Our Lives or ABC’s General Hospital.

While this latest instance of a crossover is pretty meagre by historical standards, it’s been a growing trend for Y&R and B&B in 2021. After precisely zero crossovers between late 2017 and 2020, we’ve seen Summer (Hunter King), Kyle (Michael Mealor) and Sally (Courtney Hope) mingle with westcoast colleagues Wyatt (Darin Brooks), Flo (Katrina Bowden) and Bill (Don Diamont) in the past six months alone.

It’s especially hard not to interpret Don Diamont’s crossover as an experiment, given his long and memorable tenure as Brad Carlton on Y&R. It turns out the actor was just as surprised as the audience!

“I had not ever considered that I would be part of a crossover, just because my character was so well-defined at Young and the Restless. It wasn’t like I was on for three months,” Diamont told Soap Opera Digest, referencing his 24 years portraying Brad. “I had never even considered that possibility, so it just kind of took me by surprise when they asked.”

Yet there’s no arguing that audiences were on board when Bill Spencer touched down in Genoa City, and the Bell brothers surely took note. If Y&R fans can move on from Brad Carlton’s drowning — an event that gutted viewers — and greet Bill Spencer with open arms, what else can writers achieve between these two soaps?

Although it’ll be great to see John McCook grace Y&R again, I’m looking for a deeper commitment from the writers — like when Christine Williams (Lauralee Bell) defended Ridge Forrester when he was on trial for murder, or when Ashley Abbott became the arch nemesis of Brooke Logan. I’m hopeful that this cameo won’t be a frivolous head-turner between Eric Forrester and Courtney Hope, but rather the first meeting in an escalating storyline that eventually brings the Forresters to the Abbotts, or vice versa.

Who else would like to see Eric Forrester rub elbows with Jack Abbott in the boardroom, or see Quinn Fuller trade barbs with Phyllis Summers? Perhaps Chelsea could escape her cloud of suspicion in sunny L.A., only to find romance (and trouble) with Thomas Forrester? Given the breadth of iconic families and eccentric characters, there is no shortage of stories to tell, so when will they start telling them?