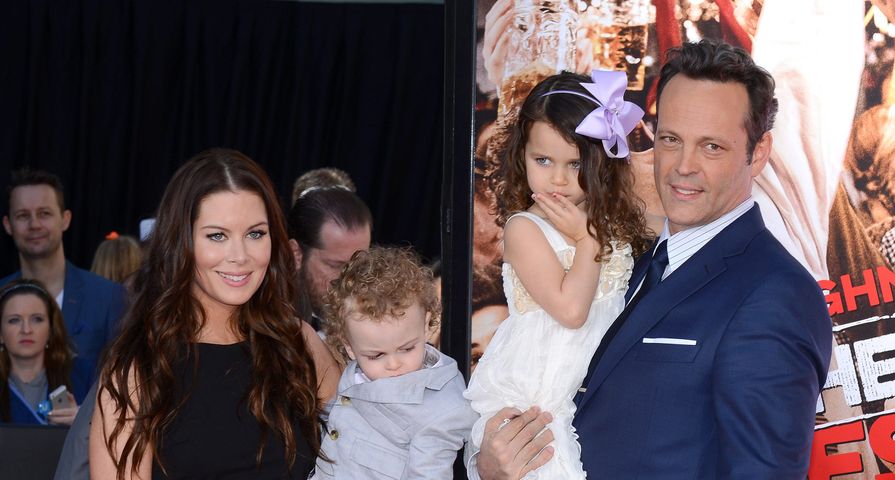 Actor Vince Vaughn is a noticeable guy, he’s tall, loud and one of the funniest guys in Hollywood but he is also one of the A-list celebrities who is best at keeping his private life just that, private.

On Wednesday March 4 however Vaughn, his gorgeous wife of four years. Kyla Weber, and their adorable children all made a rare red carpet appearance as the 44-year old actor was being honored at a hand and footprint ceremony outside of the TCL Chinese Theatre in Hollywood.

Vaughn was ecstatic to be forever immortalized alongside the real big names of Hollywood stardom such as Jack Nicholson, Meryl Streep and Marilyn Monroe and after making his mark in the cement he posed for some pictures with his beautiful family.

19-month old Vernon looked like his father’s mini-me in an adorable grey suit while being held in his mother’s arm and 4-year old Lochlyn donned a cute white dress with a big purple bow in her hair while being held by her dad for pictures.

Vaughn recently opened up to Playboy magazine about settling down and marrying at an older age after his break-up with fellow A-lister Jennifer Aniston.

“I waited until I was a little older, and I’m glad. I just hadn’t matured in that area. […] Marriage is terrific, but it’s the hardest think I think you’ll ever do. You have to really work at it and want it. I got to an age when it was something that seemed exciting. I wanted kids and a family, but I wouldn’t have at 30.”

Vaughn will also be tackling a more “grown up” type of role as well as the funnyman is set to star in season two of the hit drama series True Detective.