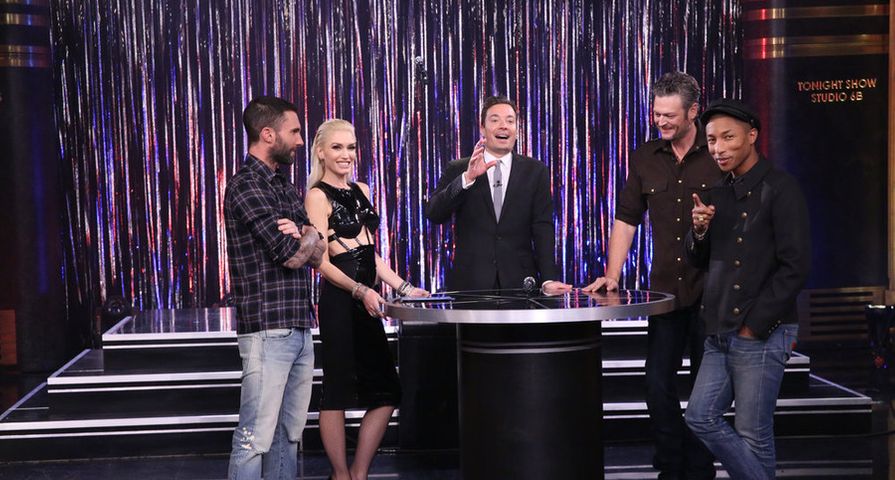 Jimmy Fallon always has scores of celebrities on his daily late night show, The Tonight Show, and nothing is better when he gets a whole group of them which was the case for Monday night’s show.

All four coaches of The Voice, Blake Shelton, Gwen Stefani, Adam Levine and Pharrell Williams, appeared on the show to play a game of Spin the Microphone with host Jimmy Fallon.

Fallon explained the game works similar to “Spin the Bottle” as one person spins the microphone, but whoever it lands on have to pick a card with a song name on it and either perform the song themselves or delegate it to someone else. “This is actually the stupidest game I have ever heard of,” Shelton joked after the explanation, with Fallon adding, “Thank you, Blake. Always great having you here man.”

The first spin landed on Jimmy who then selected Adam Levine to perform Britney Spears’ “Oops…I Did It Again,” to which he pretended to not know the words, but still pulled off thanks to his own singing talents. Blake then pulled off a really good rendition of “Y.M.C.A.” which got the whole crowd into it even though he was mostly shouting because the microphone stand was too low for him. Shelton then chose Pharrell and Jimmy to sing “It Takes Two,” which was actually really impressive before the spotlight returned to Gwen when Pharrell hilariously chose her and Blake to sing Drake’s “Hotline Bling.”

Gwen really gave it her all while Shelton only added a “bling” here and there, but many have now focused on the flirting that seems to continue between the two recently single stars which is pretty evident throughout the game.