The Entourage Movie Filmed On The Golden Globes Red Carpet 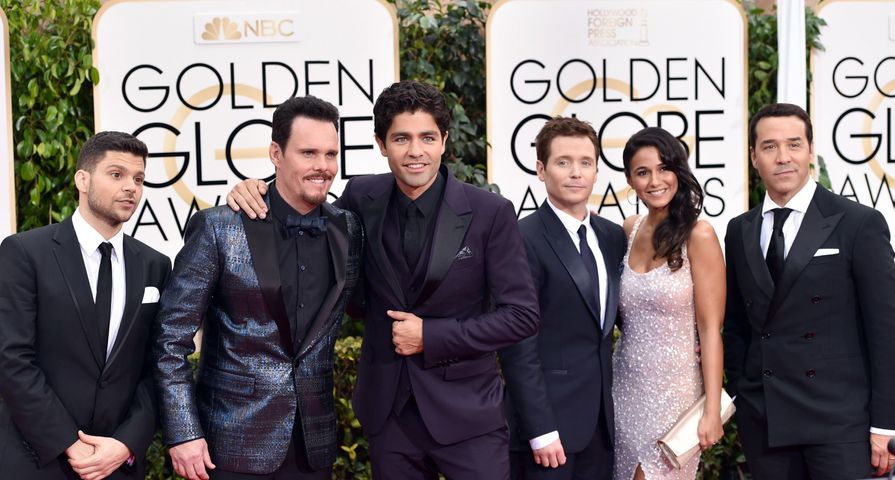 Fans of the hit HBO series Entourage have been long anticipating the show’s film version and with the first official trailer released only two weeks ago, the anticipation is only growing.

In the meantime the movie is still in the process of filming and producers are already taking advantage of awards season by using real life red carpets as sets for various scenes. Why build fake sets when you don’t need to?

The Entourage crew including Adrian Grenier, Jerry Ferrara, Jeremy Piven, Kevin Dillon. Kevin Connolly and Emmanuelle Chriqui all arrived early at the 72nd Annual Golden Globe Awards on Sunday January 11 in order to do some filming before the real craziness began.

Connolly and Chriqui who play the couple Eric and Sloan were seen doing a mock red-carpet interview for the movie with real life reporter Carson Daly.

The rest of the guys also filmed some scenes for their red carpet arrival, all looking stylish in tailored suits.

While the trailer reveals the bromance has stayed the same, and so has Ari’s (Piven) temper, Vince (Grenier) is introduced as a DJ/Director and Turtle (Ferrara) has lost a lot of weight.

The trailer also introduced some notable cameos including Haley Joel Osment, Mark Wahlberg, Billy Bob Thornton and UFC fighter Ronda Rousey who Turtle challenges to a fight in the ring.