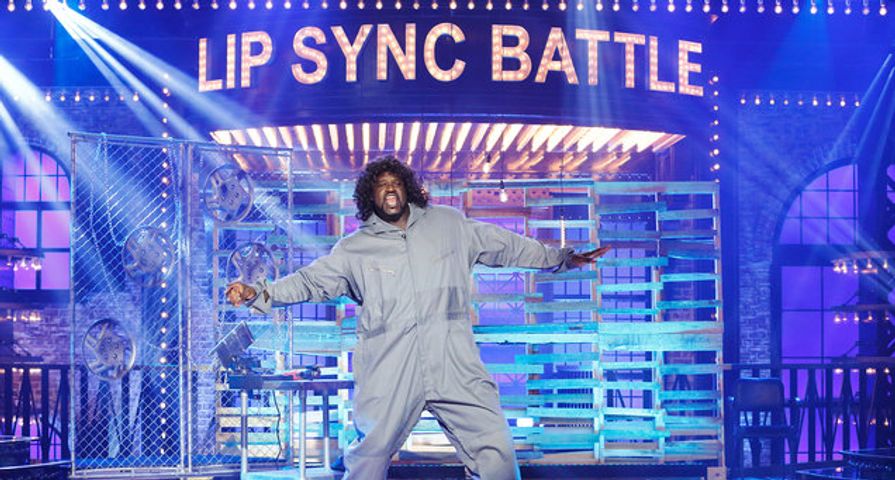 Get out your leg warmers: Shaquille O’Neal is bringing out his inner love for Flashdance!

In a teaser for this week’s upcoming Lip Sync Battle on Spike TV, former NBA player O’Neal pays homage to the 1983 classic Flashdance, starring Jessica Beals. The film portrays a young woman (Beals) who dreams of becoming a professional dancer. Donning a curly wig, grey sweatshirt, and leg warmers, O’Neal takes to the stage to lip sync the film’s feature song “Maniac,” by Michael Sembello. Over 7 feet tall, O’Neal is seen busting out some fancy footwork as the show’s hosts, LL Cool J and Chrissy Teigen watch in disbelief.

O’Neal faces off with Aisha Tyler, co-host of The Talk, who also isn’t afraid to pull out all the stops to win the battle. She’ll be performing a lip sync of Kurtis Blow’s “Basketball.”  It looks like there’s going to be some stiff competition between these two, where it’s anybody’s game.

Lip Sync Battle is known for hosting some outrageous performances in the past. In season 2, Channing Tatum dressed up as Beyonce for his performance of “Run The World,” only to have Queen Bey take to the stage herself. Anne Hathway also had a memorable performance in season 1 when she performed Miley Cyrus’ “Wrecking Ball.” And yes, Hathway didn’t skimp on making use of that wrecking ball.