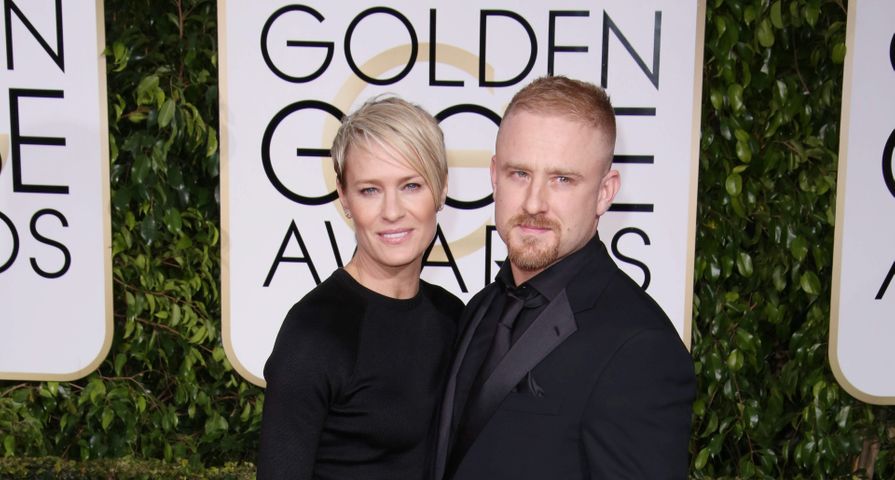 It seemed that the “love knows no age” romance between actress Robin Wright, 48, and actor Ben Foster, 34, was over back in November when it was reported that the two had split with Wright ending the engagement due to separate and very busy schedules.

Two months later however, the two were saying “what split?” as they arrived hand in hand at the Golden Globes where Wright was sporting her engagement ring. Now she is more than happy to speak about “being happier than ever” with Foster and even opened up about her marriage to Hollywood icon Sean Penn.

Wright is gracing the cover of Vanity Fair’s April 2015 issue and inside discussed how she is finally finding herself: “I was pregnant and ostensibly married at 24. You hear people say how they have ‘arrived,’ but it was just always there waiting to come out. For me, it just took a long time. I’m 48. I’m finally a person. I think I’m finally ready.”

After 14 years and two children, Wright and Penn divorced but she doesn’t look back bitterly and in fact credits Penn for getting her to where she is with her fiance Foster: “I’m not in the business of talking about what ‘isn’t.’ My eyes are set forward and I’ve never been happier. […] I believe we were together not only to have our beautiful children but to learn how to love. For the next time around, the right way. And then, what I’m looking for in people now is kindness.”

It seems she wasn’t speaking about just romantic love either as she dished on the physical chemistry between herself and Foster, “I’ve never been happier in my life than I am today. Perhaps it’s not ladylike [to say], but I’ve never laughed more, read more, or come more than with Ben. He inspires me to be the best of myself. There’s so much to learn. It’s endless. How great! It took me a long time to grow up. Love is possible as life is possible.”