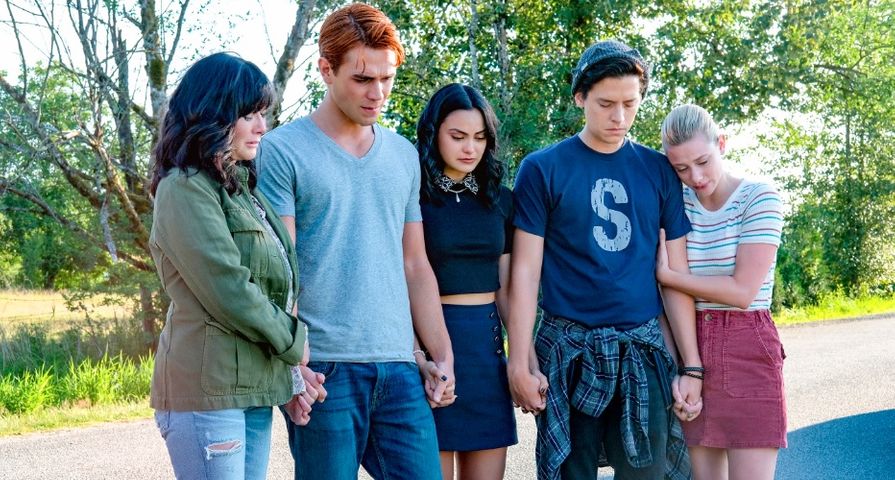 It was an episode everyone knew was coming, but it did not make it any easier.

On Wednesday, October 9, Riverdale returned with its season four premiere, but the normal chaos of the show was put on hold for one episode as the cast and characters paid tribute to the loss of beloved actor and costar Luke Perry who passed away in March at the age of 52 after suffering a stroke.

The episode began with Archie, Veronica, Jughead, and Betty in the middle of their summer before senior year of high school when Archie received a phone call that his father had died.

It goes on to explain that Fred died after he pulled over to help a woman (played by Shannen Doherty) fix her flat tire and he was then hit by a passing vehicle. Archie goes to retrieve his father’s body with Veronica, Betty and Jughead and when they return to Riverdale, there is a parade being held in Fred’s honor. During the parade there are videos and photos of both the character and the actor while a beautiful fireworks display is released.

At the funeral, Archie delivers a tearful eulogy to a crowd of grieving family and friends. “My dad was here for every high and every low. He’s the greatest man I’ve ever known. It hurts me that I never got to say goodbye,” he says. “But his spirit and his memory lives on in this town and in everyone he’s met. Fred Andrews will always be a part of Riverdale. I love you so much, Dad.”

Despite being a part of the episode, it is very clear that the emotions from all the actors are very real as they said goodbye to a dearly beloved friend and costar.

Following an advanced screening of the premiere, showrunner Roberto Aguirre-Sacasa opened up about the emotional episode, and waiting until season four to address Perry’s passing.

“When Luke passed [last season] we very quickly made the decision that we weren’t going to address it in the current season of Riverdale,” Aguirre-Sacasa explained. “We didn’t want to rush it, we didn’t want to sandwich it into all the other plotlines, and we just wanted to take our time and think about it. We briefly thought that maybe something would happen at the end of the season that would signal it and that felt a little cheap. We thought let’s just hold it so that we can think about it over the hiatus and reflect on it. That was absolutely the right decision and it allowed us to absorb what had happened and really think about what kind of story we wanted to tell.”

“Very early on, we landed on the idea that Fred should have a heroic death and that would be impactful for Archie,” he continued. “It felt like that’s a way that Fred could have gone. After that, we said this episode really isn’t going to launch any huge stories for this season. It was really going to be focused on that and the emotional effects of that passing for everyone.”

Aguirre-Sacasa also opened up about the decision to have Perry’s longtime friend and Beverly Hills, 90210 costar Shannen Doherty play the woman who Fred pulled over to help. ”

Over the seasons, Luke and I had talked a lot about trying to get Shannen on the show and the timing never worked out or the part was never quite right,” he shared. “When we were working on the episode, we knew that there would be some characters outside of our cast of characters that would be involved. We thought that rather than have another actor play that we thought it would be nice if it was someone that he cared for in real life and he cared so deeply about Shannen. It resonates for Fred, it also resonates for Luke, and Shannen speaks to that. And she really wanted to be a part of it from when we first talked to her about it.”

“One of our executive producers, Sarah Schechter, was very close to Luke and his family and we involved them as much as we could,” Aguirre-Sacasa revealed. “They read the script and they provided those great photos. I love seeing him in his baseball uniform.”

Riverdale airs Wednesdays at 8 p.m. ET on The CW.