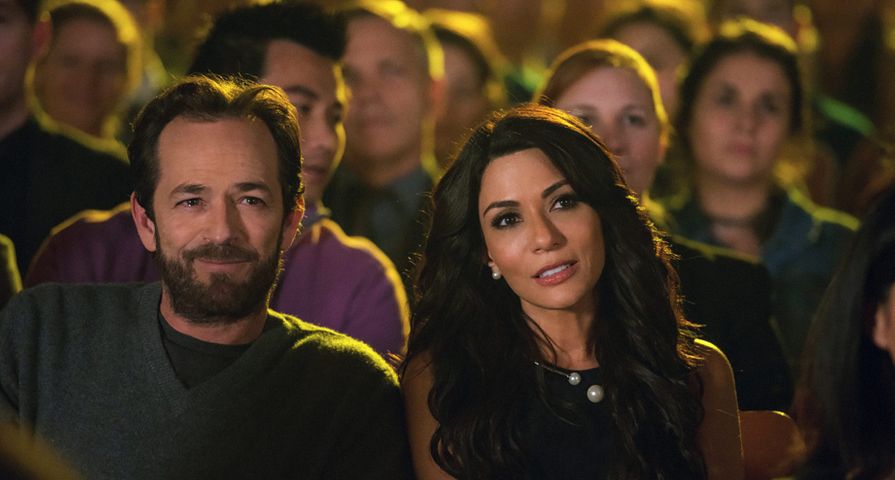 Following Luke Perry’s shocking passing on Monday, March 4 at the age of 52, many of his former and current costars and crew members are speaking out mourning the loss of their coworker and friend.

While Perry was an absolute ’90s icon due to his role as Dylan McKay on Beverly Hills, 90210, he recently resonated with a whole new generation thanks to his role as Archie’s dad, Fred Andrews, on the hit teen series Riverdale. As many of his former Beverly Hills, 90210 costars spoke out after his death, so have many of those were close to him on the set of Riverdale, which shut down production temporarily following the news of his passing.

’80s movie icon Molly Ringwald was one of the first to share a tribute to the actor. Ringwald appeared as Perry’s character’s ex-wife Mary Andrews on Riverdale. She wrote, “My heart is broken. I will miss you so much Luke Perry. Sending all my love to your family.”

Meanwhile, Riverdale executive producers Greg Berlanti, Roberto Aguirre-Sacasa, Sarah Schechter and Jon Goldwater, along with Warner Bros. Television and The CW released a joint statement: “We are deeply saddened to learn today about the passing of Luke Perry. A beloved member of the Riverdale, Warner Bros. and CW family, Luke was everything you would hope he would be: an incredibly caring, consummate professional with a giant heart, and a true friend to all. A father figure and mentor to the show’s young cast, Luke was incredibly generous and he infused the set with love and kindness. Our thoughts are with Luke’s family during this most difficult time.”

Actress Robin Givens, who played the role of Sierra McCoy, another parent on Riverdale alongside Perry, also released her own statement to PEOPLE. “I am crushed and so sad to hear about his passing. He was the kindest and gentlest soul the world will ever know. I will remember fondly all our late night conversations and dinners. He cared so much about so many people and was beloved by all who knew him. He was a true friend. Such a big loss,” she shared.

Actress Mädchen Amick, who stars as Alice Cooper on Riverdale, said in a statement, “I’m absolutely heartbroken of the news that we lost someone so incredibly special. Luke had become a dear friend. We laughed. We cried. We shared our showbiz war stories. We shared how proud we are as parents. I knew that he was always there for me no matter what. I’m so thankful for the time that we had together. He was an incredibly loving and generous man. My thoughts and prayers are with his family right now. I will love you forever Luke.” She also shared another message on Twitter, writing, “Please. I beg of you to show Luke’s beautiful family the respect and privacy that they deserve during this devastating time. Sending love to them.”

Riverdale actress Lili Reinhart who plays Alice’s daughter Betty Cooper also expressed her sadness on Twitter, writing, “I’m finding it hard to grasp that he will no longer be around to give long hugs and share his wisdom and kindness with all of us. I’m thinking of his family. His children. I pray for them to heal and find peace in this devastating loss. I just can’t believe it.” Reinhart also shared an emotional poem about the loss on her Instagram stories.

The official Riverdale Writers Room Twitter account was one of the first to share a message, “Luke Perry…you were a joyful and vibrant soul. You will be missed but most certainly your legacy will be remembered forever. Rest in love and peace, friend. #Riverdale.” They also changed their bio to read, “Season 3 is dedicated to our lovely family member and friend, Luke Perry.”

Actress Marisol Nichols who stars as Hermione Lodge and whose character had a fling with Perry’s character Fred Andrews, simply posted a photo of herself with the actor and wrote, “I don’t have any words now. Maybe I will later.”

Riverdale creator and executive producer Roberto Aguirre-Sacasa also shared his own message on social media. He shared a photo of Perry on set with an Andrews Construction Co. hat on, and wrote, “So heartbroken about Luke. He was a father, brother, friend, and mentor. Each night before he had to shoot a scene, he’d call me and we’d talk about…everything. I will miss those calls. And my heart goes out to all his family and friends.”

See more emotional tributes from those across Hollywood here.