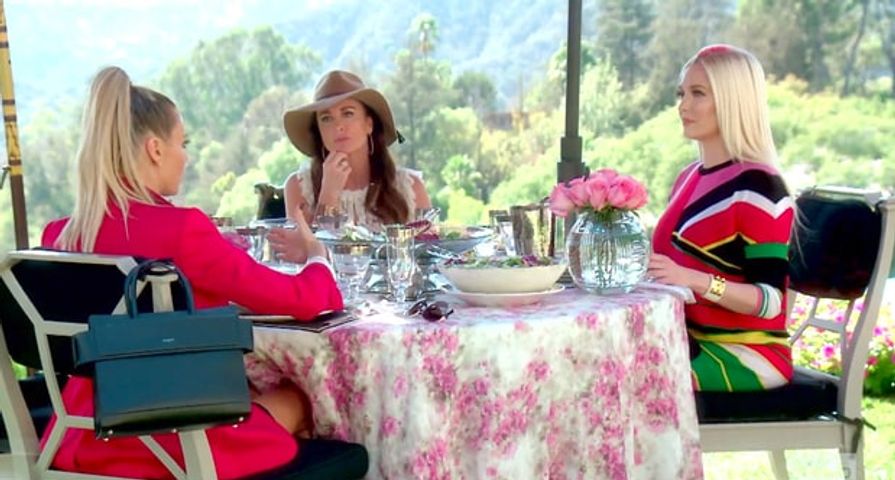 Another drama filled episode of The Real Housewives of Beverly Hills aired last night! On Tuesday, March 7, viewers started to see tensions rise between the ladies, especially when it came to Lisa Rinna. It also seemed like old issues between Erika Girardi and Dorit Kemsley weren’t resolved as things became strained between the two once again.

In the beginning of the episode, Kyle Richards went to lunch with Dorit. During their lunch, Dorit began singing praises to Kyle for standing up to Lisa Rinna. Kyle told Dorit that she truly did want to “forgive and forget” in order to move past it all, but Dorit pointed out the same observation Vanderpump had, which was that Rinna has a habit of making comments then apologizing for them in hopes that it’ll all be forgotten. Meanwhile, another two Housewives sat down to have lunch — Eileen Davidson and Erika. Although these two ladies don’t seem to care much about the argument, they did discuss the drama between Kim Richards and Rinna and while they didn’t agree with what she said, they both praised her ability to “own it.”

As one fight ends, another begins. Kyle agreed to host a launch event for the Instagram comedian known as “Fat Jewish.” She invited all the ladies, including Erika, Vanderpump, Eileen, Dorit and her husband, PK, Camille Grammer and Eden Sassoon. Rinna told Kyle she couldn’t make it due to the stomach flu, which the ladies knew was a lie when she started posting photos out shoe shopping.

When Dorit arrived, Erika gave her a compliment on her new hair, “I love your hair. It looks very fresh on you.” Dorit then replied, “That’s very sweet of you, Erika. It’s the first compliment I’ve gotten from you, ever.” Not surprisingly, Erika was taken aback by the rude reply. Erika told her, “That’s not true — I’ve said many times that you look pretty. I’ve said many times I like what you’re wearing. Don’t say that, that’s not true!” Of course, Bravo couldn’t help but show a flashback to prove Erika had in fact given Dorit a compliment in the past. Dorit told Erika she could feel her put her guard up when she’s around, and while it didn’t escalate any further, this would definitely not be the end of it. Later on at the party, Vanderpump extended an invite to Erika and Eden to join her on a trip to Hong Kong. When Eileen wandered over, Erika invited Eileen before Vanderpump could resist which meant she also would have to invite Rinna.

Later on in the episode, Vanderpump invited Erika, Kyle and Dorit over to her house to try her daughter’s new rose. When Erika walked in, Dorit gave her an uncomfortably long hug, which Erika clearly did not enjoy and Kyle announced Kim’s grandson had been born earlier that morning. Of course, it didn’t take long for tensions to arise. Vanderpump called Erika out for inviting Eileen on the trip without her permission. While Erika laughed it off, Dorit chimed in that she wouldn’t trust Eileen or Rinna with her secrets which prompted Erika to fire back that she shouldn’t trust anyone with those except for PK.

Dorit said she was lucky to have a nice family around her and Erika responded that she had a few close friends she trusted, but not many. In a one-on-one moment with the camera, Erika recounted a time when she was little and she saw her mother distraught over a man who up and left her. She remembered thinking to herself, “I’ll never be like that. I’ll never be that f–king weak.” Erika confessed to Dorit that her mother was very hard on her as a child which made her tough. Dorit still didn’t understand and Erika didn’t seem to care if she did or didn’t.

Near the end of the episode, fans got to watch as Erika traveled home to visit her mother in Georgia. They went to her grandmother’s house where she met up with her mother and her mom’s fiance, Chip. Erika showed a softer side of her when she walked around the house and recalled all her best memories of her grandmother who had passed away from Alzheimer’s two years prior. She and her mother went to visit her grandparents at the cemetery and shared an emotional moment when Erika turned to her and said: “I think sometimes you treated me like an adult, when I wasn’t ready,” and her mother confessed, “I think that had a lot to do with the fact that I was a young mom. But it made you a tough old bird.”

In typical Bravo fashion, in the last few seconds of the episode, fans got to see Vanderpump officially extend an invite to Rinna on their upcoming trip to Hong Kong.