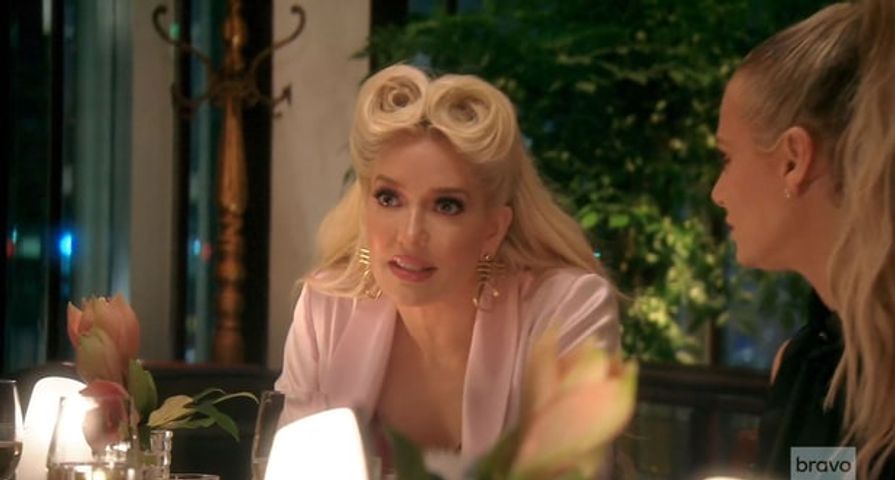 The Real Housewives of Beverly Hills returned on Tuesday, March 14, for another week of drama! Viewers watched as the ladies jetted off across the world on their trip to Hong Kong and to top off their already existing tension, Lisa Rinna confronted Dorit Kemsley about her pill popping “joke.”

Right from the get-go of the trip, Dorit starts to complain about Erika Girardi and the tension between them. In the limo ride to the airport with Lisa Vanderpump, Dorit described Erika as “cold” and said, “She’s never given me an indication that it’s me.” Vanderpump doesn’t seem to have an issue with Erika, nor does she want to, so she didn’t have much to say in return.

After a long flight, Dorit, Vanderpump, Rinna, Kyle Richards, Eden Sasson, Erika and Eileen Davidson all met up for dinner. Dorit seemed to make an effort to talk to Erika, but it wasn’t being reciprocated. “The sweeter and nicer I am or the harder I try, it’s like this stone cold wall,” said Dorit in frustration to the camera.

In other news, Eden shared with the group that she’s dating a man she met online who she’s never actually seen face to face and that the two are going on their first date in New York after she flies him in at her own expense. Safe to say, the rest of the ladies were dumbfounded. “Why is she importing somebody? Has she been through everybody else in America?” joked Vanderpump to the camera. Eden went on to reveal that her plan included greeting him naked in bed! Of course, Dorit was baffled by this and told her, “Honey, you cannot be half-naked in the bed waiting for him,” because this mystery man could be dangerous, but Eden shrugged it off.

On to the reason the ladies are in Hong Kong in the first place — Vanderpump brought them all there to try and stop the Yulin dog meat festival, so the next day she jets off to help with a Yulin documentary and extends an invite to all the other women. The only two who her took her up on her offer were Kyle and Eileen, while all the others went off to do more pleasurable activities like shopping and visiting tourist attractions. Vanderpump was pleasantly surprised Eileen agreed to tag along, especially considering the two weren’t exactly the best of friends. “That bond that was severed might have a chance of being repaired,” said Vanderpump during a one on one with the camera.

Just when we thought Rinna had finally settled all her debts, she confronted Dorit about the fact that she had been telling the other women she had a drug problem after Rinna once joked about putting a Xanax in her smoothie. “I heard that you maybe took it that I have a problem. I want to make sure that you’re very clear that that was a joke,” said Rinna. Dorit acted innocent and claimed she had no idea what Rinna was talking about and that she wanted to know who had ratted her out. Rinna insisted there was no informant and that she just had a “sixth sense” about it…not quite sure anyone would believe that.

Afterwards, Rinna and Eden went to the top of Victoria Peak for tea and some relaxation and Eden admitted Dorit once asked her what her take was on Rinna’s Xanax comment. This was all Rinna needed to hear and immediately accused Dorit of being a “f–king p–y” for not owning it.

Meanwhile, Kyle and Erika were blissfully unaware of all the fighting as they went on a walk through a beautiful garden. During their walk, Erika opened up to Kyle about her visit home and her mother. “I look at her, and my heart kind of breaks for her because I know that she lives a life unrealized. She has taken that and placed that on me and that’s a heavy burden,” said Erika. Kyle related well to Erika’s situation because of her experience with her own mother. “I’ve very distant because it’s a hard thing for me to trust. I’m still waiting for someone to disappoint me, for someone to critique me,” admitted Erika.

Later that night, the ladies headed out for a cruise, but not exactly the kind they are used to. They set sail on what’s called a “junk boat” and right away, Rinna confronted Dorit about the accusations she made about her behind her back. Dorit tried to come up with a defense, but then the other women chimed in and all admitted she implied Rinna had a drug problem. The only one who came to her rescue was Kyle, who offered a lifeline by stating she didn’t think Dorit intended for it to come out that way.

Erika didn’t forgive so easily and accused Dorit of knowing exactly what she was doing. She also took the opportunity to air her own grievances with her. When Dorit tried to chime in and defend herself, Erika said: “Let me finish, Dorit. You talk a lot. I say important s–t. You say too much boring s–t.” Dorit asked Erika what her problem was, and Erika replied, “I don’t like bulls–t, Dorit, and that’s what I think you are.” It seems Erika had reached her breaking point and so did Dorit when she snapped back with, “Then why don’t you just say it?” Erika said, “I just did!”