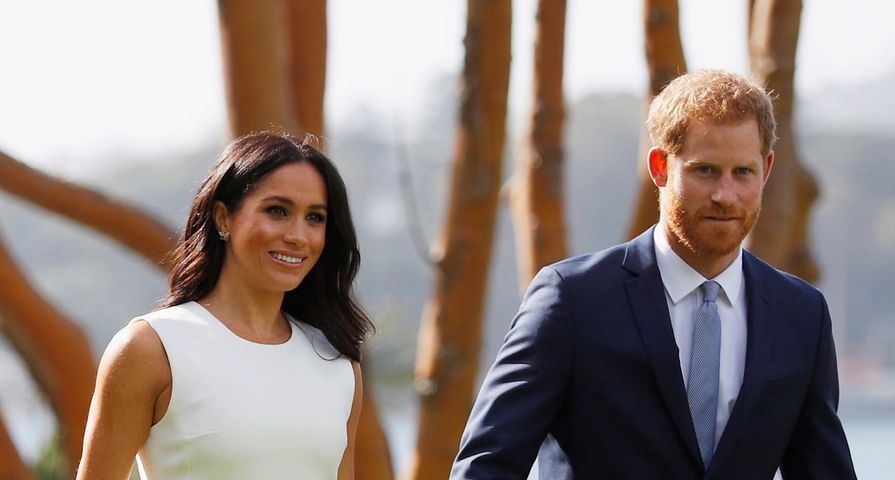 Monday, October 15 was a big day for the Duke and Duchess of Sussex as they kicked off their royal tour by announcing they are expecting a baby in the spring!

After the exciting news was shared, Prince Harry spoke at a reception at the end of the couple’s first day in Sydney, Australia where he said that he and Meghan were overjoyed to share their baby news.

At the event which was held at Admiralty House, the 34-year-old royal thanked Australia for the “incredibly warm welcome” and was happy for the “chance to meet Aussies from all walks of life,” he then mentioned the baby for the first time since the announcement.

“We also genuinely couldn’t think of a better place to announce the, er, upcoming baby,” Harry said, looking over to Meghan, 37. Appearing slightly nervous, Harry added, “whether it’s a boy or a girl.”

Kensington Palace shared the news early on Monday morning, with an adorable photo of Prince Harry and Meghan Markle who were married back in May:”Their Royal Highnesses The Duke and Duchess of Sussex are very pleased to announce that The Duchess of Sussex is expecting a baby in the Spring of 2019.  Their Royal Highnesses have appreciated all of the support they have received from people around the world since their wedding in May and are delighted to be able to share this happy news with the public.”

While in Sydney, the pair even received their first baby gift which was from the Governor General Peter Cosgrove and his wife, Lady Lynne Cosgrove. “That’s so cute, it’s our first baby gift!” Meghan excitedly said as she was handed a stuffed kangaroo and fleece UGG booties.

The couple’s 16-day royal tour will take them through Australia, into Fiji and Tonga and to New Zealand.

As fans and well-wishers eagerly await the newest royal baby, take a look at these baby protocols that the royals are expected to follow:

For quite a long time it was tradition for members of the royal family to give birth inside their homes, but that all changed when the Queen’s sister, Princess Anne, and then Princess Diana opted to go to St. Mary’s hospital to give birth. Now, the private Lindo Wing of St. Mary’s hospital is the place that the royals go to deliver their children with Kate Middleton and Prince William continuing the new tradition.

While expectant parents are always happy to get support from family and friends via a baby shower, that isn’t how it works for the royals. In England, baby showers aren’t as big of a tradition as they are in North America anyway and it just wouldn’t be appropriate for royals to throw them. Royal expert, Victoria Arbiter, explained that because they are “very wealthy…a lavish baby shower would be seen as highly inappropriate.” No baby shower doesn’t mean that they don’t receive tons of gifts though, as well-wishers, fans and of course friends and family send hundreds of gifts after a royal birth. There is just no official party thrown for the occasion.

It seems the Queen doesn’t like surprises, and certainly does not want to be the last to know when a new royal is on the way as protocol dictates she must be told first. This means that Prince William and Kate had to tell her before they told their own parents and word is Prince William used an encrypted phone to share the news that Kate was expecting Prince George. She also has to be the first to know about the birth.

One tradition that the royals have stuck too even as times have changed has been keeping the sex of their baby a secret from the public, and Prince William and Kate Middleton even opted to not even find out themselves until the birth. While an announcement about a royal pregnancy is usually made once the expectant mother reaches the three-month mark, in Queen Elizabeth II’s case, her announcement never directly said she was pregnant but just wouldn’t be taking any public engagements for the next few months.

One of the oldest traditions for welcoming a new member to the royal family is the christening and along with it the christening gown. The lace gown used for the christening of all recent royals is a replica of the one from 1841 that was used at the christening of Queen Victoria’s eldest child. Both Prince Charles and Prince William wore the original gown before it became too delicate to continue on and now it is preserved in the royal archives. An exact replica was created in 2008 and is the one used now.

Another lingering protocol following a royal birth has been presenting an extremely ornate royal birth announcement outside of Buckingham Palace. After each birth, the announcement is placed on an easel for everyone to see, and as times have changed the palace has even adopted social media through which they also share the official announcement. The royals have also continued with the medieval tradition of a town crier who announces the birth from a central location. The royals’ town crier is Tony Appleton, who wears the official town crier garment and makes the announcement, following in a tradition that was created back when a large part of the population could not read. In an effort to deflect from prying paparazzi, the royal family has another rule in which they release an official photo of the royal baby before one can be “leaked.”

It is a big responsibility for any parent to choose a name for their baby, but for the royals, as always, there are traditions and protocols to follow. Each name selected for new royal babies is chosen from the established family tree and because of this, bets are often made about what name will be chosen. It is rumored that the newest little royal, Prince Louis, was named after Prince Philip’s uncle, Louis Mountbatten. Prince George was reportedly named after Queen Elizabeth II’s father, King George VI, and Prince Charlotte was supposedly named after Prince William’s father, Prince Charles. The royals also often have several names to honor those in their family, but they don’t require a surname as royals are called by their title and when a surname is required, such as for school, they go by the location in their title. For example, Prince William went by William Wales and Prince George goes by George Cambridge.

For many families, it is normal for siblings or family members closest to the parents to be named godparents, but things are different in England. Many were quick to wonder why Prince Harry was not named godfather to either Prince George or Princess Charlotte, and that is because royals don’t often choose immediate family. The royals like to keep their distant family included by offering them the godparent status with it being explained that Harry doesn’t get the role for his nieces or nephews because “he will have a role in their life anyway.” In addition, often not one but several godparents are chosen with reports that Prince George has seven godparents and Princess Charlotte has five!

It might seem strange that breastfeeding would be a tradition, but it is worth mentioning because for quite some time the royal family relied on wet nurses for their infants, and it was only after Queen Elizabeth II’s birth that the wet nurses’ tradition subsided. According to The Telegraph, “Queen Victoria found the idea of breastfeeding repellent, considering it the ‘ruin’ of intellectual and refined young ladies.” Things have changed though as an article from The Guardian, explained, “Royal breastfeeding mothers are a relatively new phenomenon. The present Queen, Elizabeth II, was breastfed following her birth in 1926 and chose to continue the practice with her own children.”

The gun salute is one of the biggest traditions in England to commemorate major events so it isn’t surprising that it has become protocol for the birth of a royal baby. After the new royal is born, 62 guns are fired from the Tower of London which takes about 10 minutes. In addition to the salute from the Tower of London, a 41 gun salute is also fired from Green Park, which is located near Buckingham Palace by the King’s Troop Royal Horse Artillery.

While the royal family easily transitioned into the new protocol of giving birth at the Lindo Wing instead of at home, another new tradition came with it. The royal baby debut has become one of the most anticipated events for fans of the royals as it has become standard protocol for the new parents to show off the newborn while standing on the steps of the hospital. Eagle-eyed fans who have seen several royal baby debuts may have also noticed that the baby blankets all look almost identical, and that is because it is a tradition for the parents to use special knitted-lace shawls from GH Hurt & Son Ltd. “GH Hurt & Son Ltd, which has a long-standing connection with the Royal Family, sent the couple one of their £45 merino christening shawls. It was identical to one William had when he was a baby,” The Daily Mail explained. 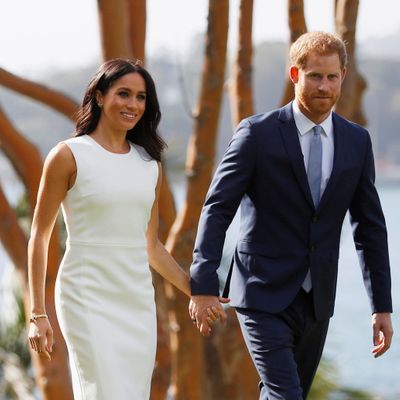