On Tuesday, April 21, Weber’s ex-girlfriend shared everything about their short-lived relationship during her first interview since The Bachelor.

During a recent appearance on the Off the Vine podcast, Prewett opened up about everything from how she was treated by her ex’s mother during their initial meeting, her honest thoughts and feelings on Weber possibly dating Kelley Flanagan, waiting to tell The Bachelor star about her virginity, and more.

It didn’t take too long for Weber to call out Prewett about the whole ordeal.

“You’d think you’d have a little more respect for this situation given we both know there’s more to the story…,” Peter wrote and tagged Prewett.

In the interview, Prewett mentioned that she and Flanagan were “best friends” and “inseparable throughout the entire season.”

“Everyone joked we were the dynamic duo. Really leaned on each other through that entire thing…,” she said of their friendship. “We were really, really close and talked 24/7.”

Prewett added that she was “hurt and thrown off” when she found out Flanagan and Weber had been spending a lot of time together.

As a matter of fact, the pilot recently revealed that he’s been staying with Flanagan in Chicago, especially amid the stay-at-home orders due to ongoing public health and safety concerns.

“I want the best for the both of them, but I definitely was thrown off…,” Prewett said. “To be honest what was really confusing for me is that two days before [Peter] was spotted in Chicago, he was calling me and texting me being like, ‘I miss you; let’s get back together.'”

“Again, he had texted me two days before, so when he texted after it had been out for a couple of days and he just sent me this like long text kind of explaining himself, but not really,” she continued. “Kind of sharing the current situation. I was very kind back… I told him, ‘What I’m saying, what I’m confused about Peter is two days ago you were telling me how much you love me and wanted to get back together and now you’re with the one person that was like my best friend.'”

“It just feels a little hurtful. And they did that on my birthday. On my birthday,” Prewett said.

She added, “I think we definitely handle breakups very differently, and I’m not saying one’s better than the other, but I mean, that situation definitely caught me off- guard.” 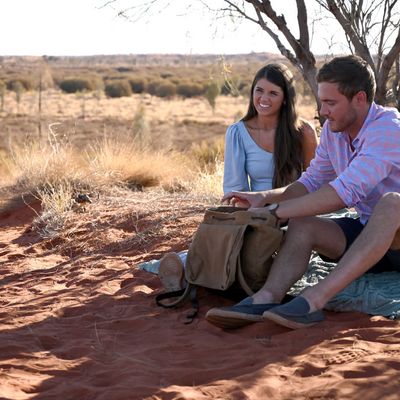