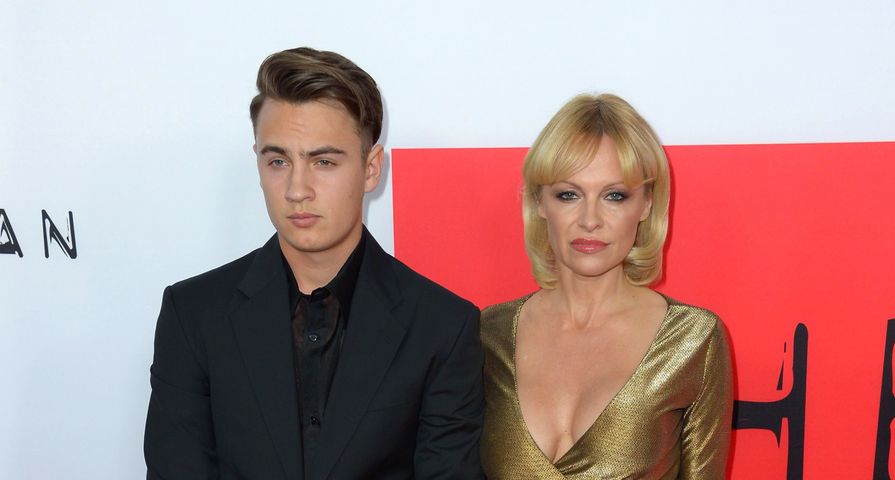 Pamela Anderson has long gotten used to turning heads for her good looks wherever she goes, but at the première of The Gunman in Los Angeles on Thursday March 12, she was passing the torch to her attractive son Brandon Lee.

The 18-year old arrived on the red carpet with his famous mother -who looked stunning in a plunging gold wrap dress that showed off a lot of cleavage as well as a lot of leg. Brandon also looked excellent -dressed in black pants and bold sneakers with a black jacket. All eyes were on the youngster’s model face and gorgeous eyes, clearly inheriting some excellent genes; “Date night with mama,” he tweeted prior to the big event.

Brandon is Pamela’s eldest son with ex-husband rocker Tommy Lee; the two are also parents to Brandon’s younger brother Dylan Jagger Lee, 17. Even with famous parents, Brandon isn’t big on the spotlight and hadn’t been seen on the red carpet with his mother since 2002, but his appearance on Thursday has sparked hopes that we see him out more often.

Although it seems he may already be taken as actress Bella Thorne replied to his tweet about “date night” with: “@Sir_BrandonLee good luck at the premiere,” which he replied with: “@bellathorne thanks babe. Wish you could have been my date, but I’m kind of a momma’s boy.”