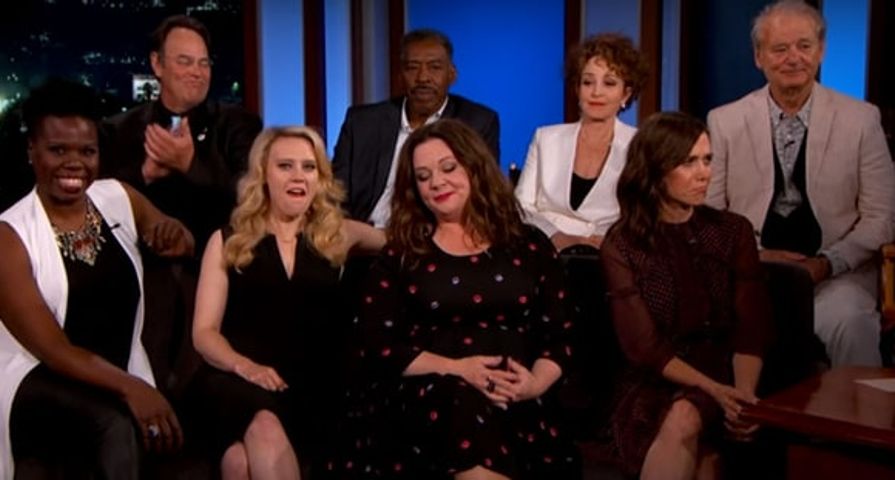 Well, this is one group you would want to call if ever dealing with a supernatural being!

Ahead of the release of Paul Feig’s new female-led Ghostbusters film, some of the original film’s stars came together with the new for an absolutely unforgettable episode of Jimmy Kimmel Live! The new stars, Melissa McCarthy, Kristen Wiig, Kate McKinnon and Leslie Jones were joined by Bill Murray, Dan Aykroyd, Ernie Hudson and Annie Potts for Wednesday night’s show to celebrate the 32 year anniversary of the 1984 film which was released on June 7 that year.

To top the whole thing off, Ray Parker Jr., the singer of the original theme tune, also showed up and serenaded the stars, getting them started in a hilarious dance off. Unsurprisingly, Bill Murray started the whole thing off by bringing Wiig to the front of the stage and were quickly followed by the rest of the celebs. Although some (we’re looking at you Dan Akyroyd) made their way to the back of the group to awkwardly clap along, Murray went straight to the front and grooved away with a huge smile on his face.

After settling back down after the dance session, the old crew officially gave the new stars their approval of rebooting the Ghostbusters legacy. “These women are performers,” Aykroyd stated. Murray added, “These girls did a really good job. And I can call them ‘girls’ because I am a boy.”